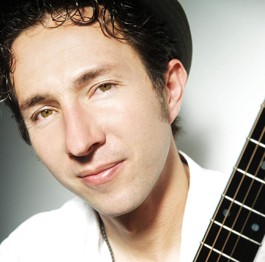 Jews and the Abstract Truth

At age two, Saul Kaye glued his head to the stereo speakers in his family living room, and one could make the argument that he’s never really unglued himself. In fact, as a teenager, his only weekly ritual was tuning into a radio show called The Blues Train , which played Muddy Waters, Willie Dixon, Son House and other greats from 8pm to 6am while Kaye played along.

Saul Kaye’s new album, Jewish Blues , is the product of two life-altering communions, the first being playing along every week to the radio. His second came at Jerusalem’s Western Wall, where after a period of falling away from his Jewish upbringing, Kaye says, “I went to Israel in my 20s and had a classic ‘wall’ experience. I was at the wall, with my family, and felt a strong reconnection.”

Kaye’s never made a completely blues-based album before, just as he’s never made a record completely written from Jewish themes. But the two came together naturally for him. “We have this amazing American blues tradition, that comes essentially from the African slavery experience,” he says. “Jewish people have been slaves in multiple countries for hundreds of years, and there haven’t been many songs written specifically around that. So the concept was basically taking the African-American slavery musical tradition, which is the blues, and dipping the Jewish historical experience into it.”

The results are simply fantastic. “Sea of Reeds” imagines the 75 percent of Jews who stayed in Egypt while others followed Moses; “Mao Tzur” sets the Art Scroll translation of the Rock of Ages to a 12-bar blues; and “Shema Coleinu” may well be the first blues song written in Hebrew. Appropriate cover songs make appearances, too: “Go Down Moses,” “Wade in the Water” and a slightly reworked “The Sky Is Crying” reflect the Jewish experience in the desert.

“It’s really Jewish in its content—as in the characters are Jewish people, and it’s about their stories—but there’s definitely not an agenda,” stresses Kaye, promising that this is not a proselytizing project. “It’s just exploring those characters through the lens of the blues. Plus, I mean, if you know about Judaism, it’s not a religion that seeks to convert people at all.”

Recorded completely live, Jewish Blues has a natural, vintage sound, and Kaye’s songs benefit greatly from pianist and backup singer Simon Russell and what Kaye calls his “New York Mafia rhythm section,” Brahm Sheray and Andy Korn. He’ll soon head back out on tour, where among other places, he’ll make a return appearance playing at the Sundance Film Festival—not that he’ll be able to recognize any of the movie stars gallivanting about. “You know, I don’t even know what People magazine looks like,” he quips. “I wouldn’t even know them!”