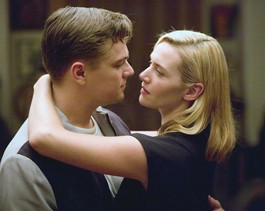 Kate Winslet has now starred in two separate films inspired by Flaubert’s Madame Bovary. First was last year’s Little Children, about the steamy dissatisfaction of a suburban mother. Now comes Revolutionary Road, an intelligent, compact adaptation of Richard Yates’ 1961 novel. It concerns a married middle-class couple, lost in desire for the ungraspable. “I want to feel things,” says April Wheeler, the female half of a pair of failed culture vultures. It’s all there in her blood-colored lips and her turbulent brow. This woman’s sensuality is never far from rage. It’s a trembling yet tough performance by an actress who smokes a cigarette like she means it.

Sam Mendes’ film version amplifies the feminism in the book. That’s no surprise, since Winslet, both a movie star and an eminent tragedian, takes the upper hand easily. Against this actress—this force—Leonardo di Caprio looks every bit the aging juvenile actor he is. They meet at a party in lower Manhattan shortly after World War II. April is an aspiring actress who falls for Frank’s proto-Beat suavity. Frank is an Army vet and a longshoreman, who doesn’t care much about what he does for a living.

When these dreams play out a few years later, Frank is commuting in from Connecticut to a dull job in the city. Now married, the Wheelers have two children, who are usually neither seen nor heard. And something has just died: April’s hope of acting. She’s frozen onstage when the curtain comes down on a failed community theater production of The Petrified Forest (incidentally made into a Bette Davis movie about a waitress who longs to leave America for Paris).

April’s humiliation leads into a top-volume film noir fight between the couple on the roadside. The following Monday, Frank tries to get his own back. He celebrates his 30th birthday by having an extramarital nooner with Maureen (Zoe Kazan), a pigeonlike secretary.

When Frank returns home, April is contrite. She has a plan: the two of them can escape their suburban unhappiness, liquidate the house and take their kids to Paris. That, she reminds Frank, is the only place where people are really alive.

This moment of mutual exhilaration is doomed to failure. That’s no surprise to those who read Madame Bovary, a book that is a series of open doors are first presented, then closed and locked. Larger-than-life movie lines spell out the couple’s misery: “No one forgets the truth; they just get better at lying.” Every great and deep movie needs something easily grasped in it—that’s the part that gets mistaken for melodrama.

Revolutionary Road is a ringing tragedy on so many levels. First is the tragedy of the Wheelers themselves, with their essential lack of faith in each other. Their pride and prejudice doesn’t help. They’re blinded by a sense of superiority that keeps them unable to see the world around them.

This film mocks suburban drones, but gently and sympathetically, just as Yates did. The supporting cast keeps providing new pleasures. Kathy Bates is a gabbling but gentle real estate agent. As Frank’s boss, Jay O. Sanders has a wonderfully meaty, jowly 1950s face; he feeds that face, snapping at his business lunch while deftly fastening the chain around Frank’s leg. (Frank’s big chance is a ground-floor job in the nascent computer industry. It’s an inside joke for Northern Californians: if Frank sticks with high tech for 20 years, he’ll be able to buy Paris.) The great Kathryn Hahn is the female half of the neighboring couple, the Wheelers’ best pals. Here she’s the soft, dim wife of a covert husband (David Harbour), who has a secret passion for April.

Michael Shannon plays an emotionally disturbed visitor who gets way too excited by the Wheelers’ plan of European escape. This, too, is the edge of melodrama, the madman who can say what everyone’s thinking. Yet Shannon’s one line of farewell is endlessly quotable, a summing up of life for generations of unplanned kids brought to term. Revolutionary Road is a movie for anyone who ever asked why some grim fate hitched up a draft ox and a prancing circus pony and then decided to present them to you as your parents.