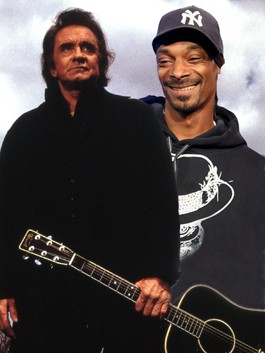 Looking to the musical disasters ahead

By now, we’ve all pored over, ruminated on and argued about the incessant year-end Best Of lists, but overlooked are the impending horrors that the music industry has secretly conspired to inflict upon us during these distracting times. Only by scouring the depraved depths of major-label press releases and gluing one’s ear to the money-grubbing grapevine of gratuitous drivel does the warning become clear. Here are the Worst Albums of 2009, the oncoming detritus to avoid.

Ridonkulous Remixes Why John Carter Cash allowed ‘Johnny Cash Remixed’ (Jan. 27 release date) to be released is beyond comprehension. That he actually executive-produced the thing and tried to declare that his dad “would have loved this remix record” is beyond the law of the land. Even worse, guest remixers weren’t even given separated tracks to work with, instead simply layering a bunch of junk—like guest vocals from Snoop Dogg—over the regular album versions. Abominable.

Awful Auto-Tune The children are to blame yet again for ‘Re:Generations’ (March 10), which remixes the splendor and talent of Nat King Cole into an incomprehensible regurgitation. “It’s so cool, and Dad would get quite the kick from this!” claims Natalie Cole, who digitally barges in on her dad’s legacy yet again on “Straighten Up and Fly Right,” mixed by will.i.am. The desperation of the music industry doesn’t get much more unbearable than Just Blaze’s remix of “Pick-Up,” which robo-fies Cole’s vocals into a T-Pain impersonation while two girls squawk phrases like “Oh my God, Becky, he’s looking at my butt!”

Contrived Crazes Mark your calendars! Jan. 13 sees the release of the ‘Fatty Boom Project’! Finally, in one place, all the hits of the nonexistent Fatty Boom craze collected on one CD! There’s “Boom Style” and its sibling, “Boom Boom Style.” There’s “Boom,” “Boom Fatty Boom” and “Boomba.” Throw in “Fattyboom,” “Fatty Afro Funk” and the slammin’ “Butthole Mix,” and your collection is complete with all the Fatty Boom tracks that no one could ever want!

Kids Krapola There are always plenty of ex-famous artists willing to embarrass themselves in the name of helping the children, and Neil Sedaka proves no exception with ‘Waking Up Is Hard to Do’ (Jan. 6), a children’s album. Featuring punny reworkings of classic tunes (“Where the Toys Are,” “Lunch Will Keep Us Together”), the cover art is a happy cartoon—even the eighth-notes are smiling—drawn by someone who has obviously not seen Sedaka in 20 years. There’s also ‘Hushabye Baby: Lullabye Renditions of Willie Nelson’ (Jan. 27). If you really want your baby to get some sleep, take the advice of a song not included on this collection and spike her ba-ba with Willie’s own Whiskey River hooch. Does the trick every time.

Putrid Packaging Forget that Creedence Clearwater Revival’s useless three-CD ‘Collector’s Tin’ (Jan. 20) doesn’t contain anything you don’t already have. Forget, even, that it’s exclusively available at F.Y.E., the last of the unexplainably remaining mall chains. No, the truly lousiest aspect of this thing is that it comes in a flimsy tin container with graphics designed by a first-semester Photoshop student. Also in the cheap-ass tin series: Poison, Rod Stewart and the Moody Blues. Good, perhaps, if you’ve lost your usual weed-stash tin, but otherwise sad.

Turdy Tributes Not mentioned anywhere on the cover of ‘AC/DC’s Black Ice Tribute’ (Jan. 13) are the Tribute All-Stars, who cover songs from AC/DC’s latest album, poorly, on this blatant rip-off. Also seeing release is Lisa “Left-Eye” Lopes’ ‘Eye Legacy’ (Jan. 27), which posthumously pairs the late TLC star with the also-dead Tupac Shakur. Guitarist Chuck Loeb and his upcoming tribute ‘#1 Smooth Jazz Radio Hits’ (Jan. 27): Feel like barfing all over again, for only $18.99!

Treacherous Timing Leathermouth’s ‘XO’ (Jan. 27), with the song “I Am Going to Kill the President of the United States of America,” released one week after Obama is sworn in. Or ‘Thizzed Up and Dranked Out’ (Jan. 20), released three years past the Bay Area Thizz craze. Or most absurdly remiss, ‘Easy Christmas Now! Groovy Carols for a Cozy Winter,’ a Christmas compilation—set for release on Jan. 20.

Stuff That Sounds Bad but Actually Might Be Cool The original cast recording of ‘Forbidden Broadway Goes to Rehab’ (Jan. 13), the collection of multicultural psychedelic cinema funk ‘B-Music: Drive In, Turn On, Freak Out’ (Jan. 13) and the need-we-say-more ‘Obscure Tape Music of Japan Vol. 2: Music for the Puppet Theatre of Hitomi-Za’ (Jan. 6). Disastrous . . . or promising? Time will tell.