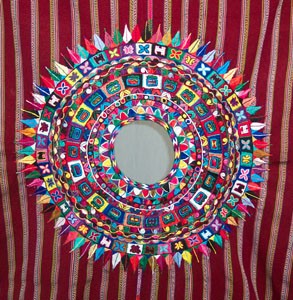 Color Riot: This ‘güipil’ from the town of Patzun–hand-woven and intricately embroidered with the Mayan calendar–is one of the textiles on display at the Loanna Clark Gallery.

While Jeanne Sloan was raising her six children in Petaluma over the past 30 years, war in Guatemala raged.

Activists do their work in many different ways, some fighting for myriad causes or umbrella issues–world hunger, civil rights. Others work on issues close to home, while still others choose to fight for human rights for a specific group. For some, there is a life-changing event; for others, the path is chosen at an early age.

Jeanne Sloan’s path to activism began on the first Earth Day in Washington, D.C., in 1970. There, she came to understand the effects that the human way of doing business was having on the environment, and she notes, “I kind of dedicated myself at that time to do what was best for the earth. Ever since then I’ve thought every day, ‘How should I do things, how should I live?'”

Previous to that event, Sloan had worked with the Kushis, founders of the Western macrobiotic movement, during the ’60s, where she became acquainted with another culture and was “just amazed at how different people can be, and that really opened my mind up to the dream we’re living in in the United States.”

Later she joined a Missouri community to attempt self-sufficiency through farming. She gave up her car for a year, just riding a bicycle–in Connecticut in the snow–and raised her children without television. Sloan wanted to go deeper, though. “I still wanted to know how people thought and felt, who were close to the land, who still had a connection with their ancestors, who were living on the line between life and death,” she says.

Sloan’s most recent project, grown out of a life-changing trip to Guatemala, is bringing the fine weaving of the Mayan women weavers to the States to be sold for a price that truly reflects their artistry and value.

To do that, she has given up her house and her car, residing in a space that had once been her art studio in Penngrove, reserving every extra penny for her project. “I don’t want what I wanted before. All I want is another 20 bucks so I can print up more brochures or buy more silk for the weavers.” Sloan’s is a story of fierce determination to equalize her circumstances with those of the poorest people in the world.

In January, 2000, Sloan accompanied Catherine Sagan on a trip to Guatemala to do field work on Sagan’s doctoral dissertation. Sagan had gone to Guatemala in the 1960s as a Catholic religious worker and she says that it “had opened [her] eyes to the stark world of the haves and have nots.”

At that time, the Guatemalan army was going into the villages, claiming the indigenous people were supporting the guerrillas. Whole villages were razed, and people fled for their lives just with the clothes on their back. In 1996 a peace accord was signed.

Sagan decided to return because she “felt it would be interesting to see how the lives of these women had changed after surviving this prolonged civil war in their country.”

The women Sloan and Sagan met in the village of Victoria, in the Ixcan region, had been among those refugees. When they returned to Guatemala, their fertile ancestral lands had new corporate landowners. With the help of religious charities and the United Nations, they were able to buy land, but it was not in the cool mountains of their origin but in the tropics, where the rainforest had once stood. There, topsoil is minimal, and climate change has brought intense weather, where droughts alternate with floods followed by severe erosion. Their drinking water is carried from the river where they wash clothes and where their pigs slosh around. Fuel is in short supply so boiling the water is not an option. Diarrhea is a persistent health problem.

“I went there and met these people, and they became my family,” says Sloan. “I felt I had to contribute to their welfare by setting up a system that is sustainable and that comes out of their way of life.”

The richness of their culture, Sloan saw, is a wealth far exceeding the value of dollars. Their art, like their entire lives, is deeply interwoven with their spirituality; the gods and the ancestors are a constant presence.

Visiting a market, Sloan encountered the beautiful woven fabrics that are made into the traditional güipils (pronounced “wee-peels”) that had been their customary attire in the mountains. She took everything out of her suitcase and filled it with fabrics she had bought.

Sloan met the anthropologist Ed Carter by chance when leaving Guatemala. They traveled together on the bus to the airport, where he talked about his years of work with the Mayan weavers. It was his view that “peace would be restored through advocating for the return of their culture.”

A unique collaboration ensued, and Fire Circle Productions was created. Sloan returned home to work on grant proposals and to find outlets for the brilliantly colored, intricately woven cloths with the intention of marketing these genuine projects for their true value. Carter continued his work creating documentaries about the Guatemalan people.

Since the textiles take two to three months to create, Sloan decided that they should be sold through galleries for several hundred dollars, a price commensurate with the labor and artistry that went into them. She asked everyone she knew to contribute. Lilith Rogers, who met Sloan at the Sitting Room in Cotati, was so inspired by the project that she too began asking friends to write checks so that Sloan could buy more güipils. And then Loanna Clark offered her Petaluma gallery for the first showing, now in progress.

Selling their products to supplement what their husbands earn from farming is giving the women a sense of their own power, said Sagan, and they’re beginning to see the power of their influence, not only on other women, but on their families. “In Guatemala, there is this sense of machismo. The man is considered the most important in the family. But the women have come to appreciate that they really are in charge of raising their children.”

Sloan and Sagan hope to help them create a sustainable lifestyle. “In our complex world, we need to remember the power of the individual to change things,” says Sagan. “If we can make the choice for conscious consumption, rather than going to the mall and buying as much as possible for the lowest price, we can help right the balance.”

Adds Sloan, “Our tool is our money. Money and water flow the same way. And that is why it’s appropriate to bring these things here, to move some of that wealth from where there’s lots of it to where there’s little.

“We’re trying to create a little streamlet in that direction.”

On Nov. 1, the Loanna Clark Gallery will host a reception from 6­9pm, featuring native foods, music, dancing, and the stories of the designs wrought by the Mayan weavers. The show continues through Nov. 30. 21 Kentucky St., Petaluma. 707.762.2133.