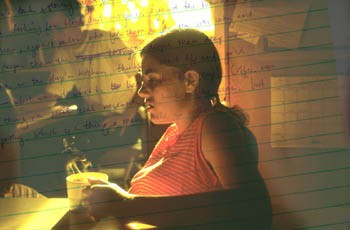 Short fiction is experiencing something of a renaissance at the moment, or at least it seems. The magazines are alive with talent, the bookstore shelves are sagging with new collections by young unknowns, and cafes and reading spaces are ringing with ingenious constructions and fantastical characters. Here, we add our voices to the fray, with the winners of our annual Java Jive writing contest.

A call for entries of pieces no longer than 1,000 words–no theme, no guidelines–garnered a fine stack of literature. And we culled through it all and sent the best of the best to our learned judges–no strangers to fictional worlds, being writers themselves. Guy Biederman, Ken Rodgers, and Jordan Rosenfeld made the tough decisions for us, and below are the top two vote-getters, Marianne Rogoff and Lynne Millar.

We’d also like to note our honorable mentions, Angie Presser and Cecile Lusby. Although their stories aren’t printed here, you will have a chance to hear them read with Millar and Rogoff at the Java Jive event, Oct. 23 at A’Roma Roasters, from 6pm to 8pm. Our esteemed judges will also be stepping up to the podium that night to read their own work. It shouldn’t be missed.

Congratulations to our winners, and thank you to everyone who entered. Keep writing!

I learn to live in our place without Dearly Beloved by getting rid of the things that remind me of him. I hire two men–Zippy Haulers–to drop what he left behind and I no longer want on his doorstep: (1) queen-sized bed, wedding gift from my mother; (2) couch, where he slept during the months when he couldn’t make up his mind between me and the girl; (3) Joe Montana autographed poster he won on a sports trivia TV game show; et cetera. I charge a double futon mattress and frame with a drawer underneath where I store away all mementos of our daughter and her death. I buy a new couch with hideaway for guests. I rearrange all the furniture and everything else in every room, open drapes drawn closed for years to reveal a new view, which we had neglected to find the whole 15 years we were married.

The storage room is the only thing I don’t go near. It is below the apartment building down a flight of stairs, and there is stuff in there we hadn’t touched since we moved in. I bought myself a bike, but the landlord doesn’t like to see evidence that people live here, so we are not allowed to keep plants on the deck, hang clothes out to dry, suspend colored lights around outside windows, or leave bicycles at the foot of the stairs. He wants everything in storage or upstairs in the apartment. It’s small upstairs, plus I ride the bike often, so taking it up and down stairs is a pain. When neighbors move out in the building behind me, I ask for access to their space.

This means I will have to clear out down below. And what’s there is “down below” for a reason: years and years of the past, stuffed into cardboard boxes.

I tell Dearly Beloved about this project.

He says he hurt his back.

I say I’ll get started on it but can’t afford any more Zippy Haulers.

I dread going in there. But I go.

A lot of it is empty boxes from things like my new iMac computer system. That’s easy. There are toys from Christmases and birthdays past that Star no longer plays with: Candy Land and Chutes and Ladders, Domino Rally, loop-the-loop race tracks. The freestanding basketball hoop we bought one year but the landlord made us take down. Many boxes of paperback books. The worst are the endless envelopes of photographs and the filled notebooks, drafts of creative work begun with enthusiasm, revised then never brought out.

I deal with the big stuff and assess old manuscripts and other thoughts that never materialized the way we hoped. I tackle a little at a time, then wheel big trash cans up to the door, and start tossing. Fill one iMac box with toys and books and baby clothes to mail to my sister with a one-year-old, another for Goodwill. On one side of the dark hall I stack “mine” and on the other “his.” When it isn’t clear whose is whose, if I want it I keep it, otherwise I place it with his.

The people who need this room are already moved in and anxious to get at the space. I tell Dearly Beloved he needs to show up to move the rest out of the way. He shows. He’s overwhelmed when he sees everything, but he bends and lifts with his bad back and carries boxes to his car. It’s painful to watch him, but I can’t do it all by myself. We work separately, simultaneously, sneezing through the dust, feeling our feelings, not speaking. Once we pass each other close in the dank space, and he suddenly wants to kiss me. I might be willing, but he says, “Want to make out?” which reminds me of his “younger woman” and also of being in seventh grade, so I pause before responding.

He stiffens, says, “I know when I’m being rebuffed,” and picks up a box that is so old the bottom falls apart as he lifts it, and everything crashes to the ground around his feet. He crumples down in a heap with it, to sit amidst the rubble, weeping. I join him on the cold cement floor in the ill-lit hallway below the building where we used to live.

I listen, I smell his familiar sweat.

“Why wasn’t it good enough?”

He sobs. I wipe my forehead.

He starts telling me how his life is, two years since he moved out.

Not great with the girl. She’s, like, another generation.

“I like feeling up hippie girls in bars in Fairfax. But I hate taking them home.”

“Because then they expect something from you?”

I imagine his tongue in the mouth of a dreadlocked tattooed girl in a long skirt and earth shoes, hands traveling up under her braless gauze blouse. I picture them dancing to reggae at 19 Broadway. All around him on the ground are ideas he used to have: videos shot and never edited, books written to completion but never published, a makeup bag from his acting career that never went anywhere because it kept being interrupted by deaths in our family–his father, his mother, our daughter–and all the other reasons things don’t work out like you plan.

I find a clean styrofoam produce box and start to fill it, but I have to leave him to finish what he started, and go upstairs to sort over what’s left.

Marianne Rogoff is the author of Silvie’s Life, which was optioned twice, by Village Roadshow and Paramount Pictures. She has won two Marin Arts Council grants in fiction and is a regular contributor of book reviews to The Bloomsbury Review. She teaches in the writing and literature program at California College of the Arts in Oakland.

Well, you’d a thought I’d already done my job hunting at the EDD. Because we’d had that day last month when Mama sat in the car because of her bad back while I went in and reorganized the brochures for them and made sure the Spanish ones matched the real ones and they weren’t telling the poor suckers that the trains only leave with the ducks at dawn. Hah. Like I would know if it said “There are no jobs for losers like you” or “The bananas are always dressed in satin.” I did that job hunting the best that I could. With one of my front teeth gone gray, I’m not crazy about talking to office people so I messed around with the brochures, straightened chairs, and watched people. Maybe someone would see how well I was doing and offer me a job straightening up or watching. It all took enough time so when I went back out to the car Mama wasn’t too nosy about how they had no jobs for someone with my background. That’s something she could appreciate. My background. She’s got a lot to do with that and she knows all about it. Mama ought to know that’s why I’m not ever getting a job, so I don’t know why she was so set on this job, but here I am. I mean I can’t go walking around on bad feet, can I? Who would want to hire a person with bad feet anyway? That’s what I asked them at the front counter, but they said to “fill out the application and these three forms, sign here, here, and here at the X, and here’s a pen and have a seat over there please.” So I put my name on it and then this guy applicant came in. He had on a suit and tie, but kinda crumpled, and one brown sock and one black sock. Imagine. He looked nervous, like he needed a drink, like I know about that, he kept wiping his hands on his pants as he waited for their speech. And then they told him the same stuff, but he sat on the other side of the waiting room from me, so I had to get up and go limping over to him and ask him was he applying for a secretary job and why would a guy want to be a secretary. So you know what he did? He got up and went and sat down where I’d been sitting. I thought that’s the thanks I get for curiosity and me with bad feet. And then this girl comes in with her nose up and her slip showing and they tell her the same stuff. I watch her real hard as to where she’ll sit so I can go over there and tell her that her slip is showing, but I can tell she won’t appreciate it so why bother, though I do try to be a nice person and set people straight. Mama says she’s trying to set me straight, but really maybe she should get this job. Instead of helping that girl, I limped to the front counter and asked them if they had any openings for older people who liked to set things straight.

Lynn Millar has looked for many jobs. She currently has her own business, works as an instructor, and is writing a how-to cookbook. This seems like enough. She lives in Guerneville, and has been known to kayak and to sweat hiking uphill. She enjoys candlelight dinners and walking on the beach.