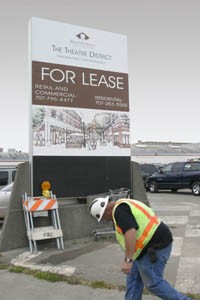 Is Petaluma destined to become ‘Whitesville’ only?

Take a blighted 400-acre patch of dirt, add a team of community volunteers with a plan, throw in well over $100 million worth of development, and what do you get? You get the almost uncomfortably hip downtown Petaluma, increasingly known as “Whitesville” in honor of developer Matt White, whose Basin Street Properties is changing the face of the city’s downtown.

While the historic River City’s iron fronts remain intact, the rest of the downtown core is getting a hot Botox injection–predominantly from White’s company. Basin Street not only built the $100 million downtown Theater District, but it also has plans to redevelop the Golden Eagle Shopping Center on East Washington Street, widely considered an antiquated eyesore (albeit one with some great discount shopping).

According to the city, plans for the estimated $17 million site could include destruction of the current center, to be replaced by a new mixed-use property that would have its face, instead of its back, to the Petaluma River.

The revitalization of River City brings with it not just a strain on area traffic and streets, but also environmental roadblocks as well as the looming question over whether Basin Street Properties has too much influence over development in the city. Longtime residents also wonder what will become of such staples as the Grocery Outlet. While White–who has professed his plans to be a billionaire and enter state politics within four years–has plenty of friends, his greatest antagonist could prove to be the spirit of Petaluma itself, a spirit that is fighting for redefinition in the face of radical changes.

(A similar figure to White is developer Orrin Thiessen, who has changed the face of Graton, Cotati and Old Town Windsor, raising questions of how much sway any one developer should have on creating the character of a town. Thiessen prohibits chain stores in his projects, while White seems apt to provide a mixture to the public. )

Is Petaluma returning to its former “butter and eggs” glory, when it came to epitomize hometown America with its cherubic ’50s glow, so that even Hollywood filmmakers began calling it their home away from home? Or is the River City simply becoming another local example of the tragedy of vastly increased development? Could all the good intentions merely lead to the Wal-Mart-ification of Petaluma, with plans for mixed-use development inadvertently leading to the kind of construction civic leaders and progressives alike won’t be able to stop?

For now, it seems that even progressive political leaders are optimistic about the potential for revitalization.

“It’s one thing after another to get the pieces in place,” says Petaluma mayor David Glass. “We will hit challenges, and we will work through them.”

Glass’ challenges so far include encountering contaminated soil and collapsing underground infrastructure during construction. “The challenges are real,” he says. “But everyone is seeing the tremendous opportunity this represents.”

Glass does not share worries over Basin Street Properties’ influence and has little doubt that the area will become more diversified with future developments. “Yes, [Basin Street was] first, and maybe they will be the largest. As far as concerns about what some have called ‘Whitesville,’ they don’t understand what’s happening here.”

“Whitesville,” however, may prove a prophetic moniker for Petaluma. While Basin Street is giving a shot in the arm to the downtown, it is also contributing to ongoing gentrification of what had been predominantly a blue-collar town for most of its nearly 150 years. It is no longer unheard of for multigenerational households to live together out of necessity until family members can afford places of their own. There is a specter looming over the city, one that could be wearing the sign “Not Enough.”

But Glass calls the Golden Eagle Shopping Center renovation on East Washington Street “the crown jewel of the whole plan. You start filling in a blighted area with pristine development,” he says, describing the recipe for redevelopment success. “The big winner is the city of Petaluma.”

Pamela Torliatt, the longest-seated member on the Petaluma City Council, also praises the project’s potential. “It’s a unique opportunity that we have to combine the adjacent property with the Golden Eagle Shopping Center’s redevelopment,” she says. “This could be an enhancement for the city to create additional access for the Petaluma River Enhancement Plan around the Turning Basin, as well as provide economic stimulus for retail development in the city. This could bring additional sales tax revenue for the general fund, as well as additional sales tax dollars. I also feel this is exactly the sort of redevelopment envisioned as part of the central plan process and am happy we’re following through with the implementation of that plan.”

City kudos for the project and to Basin Street aside, the members of the former Central Petaluma Specific Plan (CPSP) committee who crafted the plan over years of effort, claim that they have been excluded from discussions over the implementation of the plan since its approval in 2003.

The largely Age of Aquarius-era activist members of the committee sought to create a plan that would recenter Petaluma’s spirit and economy downtown. After the process of creating the core plan was completed, however, the group was dissolved and lost control of the CPSP, and they have not been allowed to have any say in its implementation. This means not only that the plan could diverge from the community blueprint, but that the entire vision could be co-opted by developers hoping to cash in on a community vision.

David Keller, a former Petaluma City Council member and co-chair of the CPSP committee, says members of the group sent letters to the city hoping to participate in reviewing projects over the first year of the plan’s implementation only to be denied by the city’s planning director, Mike Moore. Members of the group, however, have tried to stay active as projects have come to pass. Keller cites a “disengagement” between developer White and the committee as a cause for concern.

“I’m sorry to say Matt White has been singularly disinterested. Unlike his father, he has been disengaged from committee members.”

Keller says Matt’s father, Bill White, former head of Basin Street, had attended most of the committee’s meetings and was an active participant in the process. Keller says some aspects of the development process had “been great, but some could have been improved to the benefit of the public and Basin Street. When you develop a new scheme for zoning, the feedback process is just as important as the planning process. These buildings are going to be here for 100 to 200 years. It’s not just Matt White, but Mike Moore who is not interested in engaging the community.”

Neither Moore nor White returned requests for comments by press time.

Keller added, “This is a review process that should be done every year for the first five years and then every two to three years after that. There are issues of parking, traffic and public space to work out.”

Keller has high hopes for the Golden Eagle site–and for Basin Street–to create something community-centered. He says public space is vital for the area and mandated by the CPSP. Hoped-for plans for the area include a 10,000-person-capacity public square that could accommodate the number of people who used to attend the Petaluma River Festival. The space, he says, would also include mixed-use retail and residential.