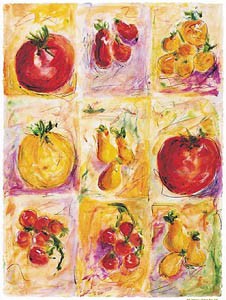 The names! Colors! Shapes! Flavors! In praise of heirlooms

A well-known portrait by Florentine painter Domenico Ghirlandaio, An Old Man and His Grandson, depicts exactly that: an angelic, blond-haired tyke gazing up at an old man with a gnarled, bulbous nose. The look of eye contact between the two is tender and convincing, yet you can clearly register a level of innocent awe and wonder in the child’s face.

Some scholars hypothesize that the old man’s honker looks so hideous because the elder model for the painting was afflicted with the skin condition rosacea. But when I consider that painting, I look at the old man’s nose and see an heirloom tomato. Never mind that in 1490, when Ghirlandaio created the painting, tomatoes hadn’t yet made it to Florence, let alone the whole of Europe (it’s thought that Italians had another 60-some years before they began cultivating the savory fruit).

Heirloom tomatoes can resemble a lot of things–accordions, hot peppers, eggs, bananas. They can sport stripes, stipples, ridges and freckles. They can ripen to a spectrum of colors–purple, green, orange, black–sometimes within the same tomato. Heirloom tomatoes boast many qualities. But what is an heirloom tomato?

One very broad definition calls it a variety of tomato that’s been passed down though several generations because of its distinctive, desirable qualities. Heirloom plants are open-pollinated and were more commonly grown prior to the industrialization of agriculture, before genetic diversity was traded for sturdiness, productivity and high yield ().

In the past decade, gardeners and small-scale farmers have devoted more and more affection and attention to heirloom plant varieties, in part to preserve genetic diversity, and in part for the sheer pleasure of cultivating flavor and beauty. Heirloom tomatoes in particular win the hearts of gardeners; after all, no animal, vegetable or mineral tastes as good as a homegrown tomato ripened on the vine under the blistering summer sun.

The names alone delight with their whimsy: Boxcar Willie, Northern Lights, Mortgage Lifter, Dixie Golden Giant, Lemmony, Paul Robeson, Dixie Golden Giant, Cosmonaut Volkov. Each hints at the variety’s backstory. The Mortgage Lifter’s tale goes that a repairman raised and sold so many of his prized tomato plants that he was able to pay off his mortgage. The Paul Robeson variety was supposedly named by a fan of the real-life Robeson after his “rich and robust” voice.

The glorious imperfections of heirloom tomatoes serve as potent reminders of what our food should not look like: flawless. We don’t have to settle for flavorless orbs designed in a lab for shelf life and resistance to denting. Fruits and vegetables are supposed to look like they rose up from the ground, because that is how they grow. Each has its own character in appearance and taste, which is something that buyers at big chain grocery stores and diners at fast-food restaurants don’t want; they value consistency over individuality.

For lovers of great tomatoes, there are two ways around this. One is to grow your own tomatoes, a collaboration between humans and Mother Nature that’s kept families fawning over vines for centuries. (Local gardeners can enter their homegrown offspring in the Kendall-Jackson Heirloom Tomato Festival competition, where tomatoes will be judged on look, flavor and weight.)

The other way is to support a farmer who’ll do the dirty work for you. Good farmers markets have a bumper crop of heirloom tomatoes to offer in these late summer months, and well-stocked, forward-thinking grocery stores often carry heirloom tomatoes as well. I even spied small plastic crates of heirloom tomatoes at Trader Joe’s a few weeks ago. Each package was filled with the exact same specimens: one long, tapered green tomato; one round, yellow tomato; one beefy, ridged, purplish-red tomato–which seemed to defeat the point, but it’s encouraging to see purveyors responding to consumers’ demand for produce that tastes like food.

And taste is where heirloom tomatoes really reward. Ping Pong Pink cherry tomatoes are better than candy and taste almost like sweet, plump berries. Brandywines have garnered many fans for their toothsome texture, their mellow but fruity acidity and their deep, mottled color. These are the slicing tomatoes we all yearn for. Not all heirloom tomatoes make great snacking, though. “Paste” varieties are usually better suited to sauces and canning than eating raw–and what better way to draw out summer than to put up a few jars of tomatoes to help you get through the dreary months of winter?

These beauties are best served by minimal preparation. Slice and arrange on a platter, sprinkle with salt and freshly ground black pepper, and drizzle with olive oil for the tomato salad of everyone’s dreams. The French are known for their fondness for stuffing tomatoes, and the hollower, sturdier stuffing varieties of heirloom tomatoes yearn for a filling of breadcrumbs, rice or couscous seasoned lightly with herbs. Bring out the bacon for the best BLTs of the year, or forget the bacon all together and have a thick slab of tomato on toast. Pretty soon you’ll be spotting the heirloom tomatoes hidden in everyday objects, too, just like that old man’s nose in Ghirlandaio’s painting.

Though liberties can be taken with the “heirloom” label, the main point is to preserve genetic diversity. The centralization of agriculture in the last half-century has led to fewer and fewer varieties grown. To suit the needs of industrial agriculture, scientists developed hybrids that were resistant to disease and could be more easily propagated on acres and acres of land on a corporate farm. However, the seed from a hybrid plant will revert back to one of the parent plants, meaning that farmers must purchase seeds from the company that created the hybrid.

Since the 1940s, seed companies have marketed mostly hybrid tomatoes to customers. This means not only less variety for the garden and the table, but less genetic diversity. When a large percentage of the country’s crop comes from the same parent lines, the crop is much more vulnerable to blights. Genetic diversity creates a maze full of dead ends that diseases run into head-first.

Various nonprofit groups work to collect as many varieties of rare and heirloom plants as possible (Kendall-Jackson supports Seed Savers Exchange, an organization that saves and share seeds among its members). By planting, growing and sharing many types of plants, we keep our culinary, cultural and genetic heritage alive.