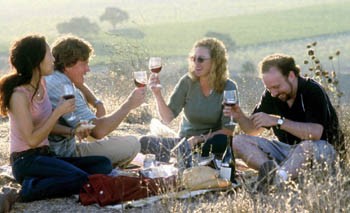 Getting it straight about ‘Sideways’ bashing

It just ain’t right what that movie did to Merlot. Like Cinderella or Rodney Dangerfield, this hapless grape gets no respect, thanks to the now infamous line, “I’m not drinking any fucking Merlot!” in the movie Sideways. But the resilient grape isn’t dying quietly. Although wineries might be ripping out Merlot vineyards and cutting back on their single varietal production, it still reigns as one of the über-grapes that will stand the tests of taste. Some say the wineries brought the disdain on themselves. An easy grape to grow, fruity, nondescript Merlot produces huge profits the casual drinker willingly generates. Basically, Joe Wine Public goes ga-ga for the stuff since lower tannins and that in-your-face cherry zing are a white-wine lover’s answer to red.

But the snob hoards have grown restless.

A principal grape in many famous St. Emilion Bordeaux reds, Merlot, they said, should be revered. After tasting bottle after bottle of generic California plonk, though, they disdainfully proclaimed Merlot had been sold out.

And it had, by many producers, but not all. I remember drinking a worthy-of-worship 1999 Flora Springs Napa Valley Merlot, with the 2000 and 2001 not far behind. I know California hasn’t completely exploited this modest grape.

On the other side of the pond, France has remained convinced of its worth. Sure, there were some Southern French wineries that bottled appallingly gutless Merlot by the jugful, but Bordeaux producers continued to make balanced, age-worthy juice that snobs crave. How did they escape without scorn? Bordeaux doesn’t bottle single varietal wines (meaning labeled by grape type), so the Merlot stigma is lifted and snobs can sip without ridicule. Thus, the irony in the movie Sideways: The sacred 1961 Cheval Blanc that Miles chugs in the diner–it’s a Merlot blend.

Although snobs may have rejected California Merlot and impressionable newbies are nervous to drink it, most of America is still buying the hell out of it. In fact, A. C. Nielsen reported that Merlot represented 11.6 percent of all table wine sales before the release of Sideways, and at the end of January (the indie flick was released in October), those sales had climbed to 12.2 percent.

The future of Merlot remains up in the air. What many are saying, including Paul Wagner of Balzac Communications in Napa, is that the disparaged Merlot grape is being replaced by its stepbrother, Syrah (Shiraz). Syrah has plenty of fruit with a strong personality, something Merlot lacks if it’s mass-produced. Wagner feels California is finally reacting to what the evolving public really wants.

Toasted Head 2002 Merlot Easy to drink and approachable, yet has plenty of heft. Lovely floral nose, followed by lively raspberry and roasted coffee in the sip. $14.

Clos Pegase 2001 Mitsuko’s Vineyard Merlot Elegant and sensual as it rolls over your taste buds, easing into blueberries, red cherries and tart raspberries. Velvety yet firm tannins. There’s nothing wimpy about this Merlot. $18.

Chateau Trimoulet 2001 Saint Emilion Grand Cru (France) This Bordeaux blend is 60 percent Merlot, and has the earthy cherry thing typical of wines from this area. Nice little raspberry kick after it has aired a while. $28.