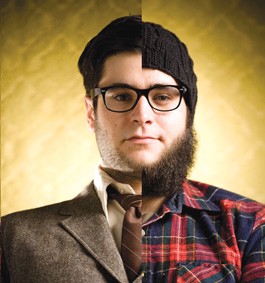 In His Right Place

Nicholas Wolch is 23 years old, which means he was 13 when Radiohead’s Kid A came out, which means he grew up assimilating complexity at a formative age and thinking it’s what normal music sounds like. Those of us a bit older don’t have this luxury; we fall back on a foundation of straight drum beats and guitars and not, as the younger generation does, incessant polyrhythms, MIDI synthesizers and laptop software.

So if Wolch’s music, released under the name Goodriddler, seems too intricate to come naturally, think again. Or at least see him live, where he plays drums, keyboards and ukulele, and occasionally sings to backing tracks, with effortless grace. He’s been doing this for several years now without a proper album, while aborting various recording projects—I once ran into him after he’d recorded vocal tracks in the creek tunnels beneath downtown Santa Rosa. This weekend, he finally releases Tickling the Tail of a Tiger, his first proper CD and one of the local music scene’s most engaging releases.

If more of Goodriddler’s songs were major keys, Tickling the Tail would be perfect music to play in restaurants or hair salons. As it is, most of Wolch’s compositions are more suited to film scores or late-night drives; in other words, during those moments good for paying close attention instead of allowing sound to fade into the background. Mix the natural chamber-pop of Sufjan Stevens and Yann Tiersen with unnatural electronic manipulators like Aphex Twin and Burial, and you’ve got a typical impulse in Wolch’s incredible musical brain.

Goodriddler celebrates the album release with a jam-packed lineup featuring the Velvet Teen, the Iditarod, Not to Reason Why, the Crux and the Americas on Friday, May 7, at the Phoenix Theater. 201 E. Washington Blvd., Petaluma. 8pm. $8. 707.762.3565.