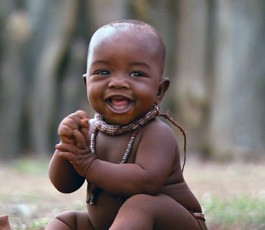 'Babies' are just so darn cute

Generally, the topic of babies factors into movie night because someone has to watch your cherub-faced cutie while you unwind over an ever elusive infant-free evening. With this in mind, the unveiling of Thomas Balmès’ new documentary Babies, a 79-minute ode to tots around the world, comes as a bit of a cinematic surprise.

Directed by the award-winning Balmès and the brainchild of Alain Chabat, Babies follows four infants and their families from their intense arrival on this earth to their stumbling first steps. Admittedly, such a basic premise can seem as shaky as that first teetering shuffle, and even the most tender-hearted individuals may find themselves standing in the ticket line thinking: “Really? I’m paying to watch someone else’s home video material?” But such skepticism is unwarranted. Babies follows the Namibian Ponijao, Bayarjargal of Mongolia, Japanese Mari and the Bay Area’s very own Hattie in a delightfully philosophical fashion.

The documentary is short and sweet, accompanied by a pleasing soundtrack but left without any established dialogue, Balmès and Chabat don’t force messages down the audience’s throat, but rather leave one with the happy option of cooing through the feature or experiencing just a twinge of unease at the extreme differences in child-rearing practices across oceans. While some may be horrified by Ponijao’s newborn playthings (consisting primarily of sharp rocks) or Bayarjargal’s playpen among the farm animals, it’s equally possible to grimace at the infant yoga classes in North America.

Perhaps not the best date movie, Babies is oddly enjoyable, and with a Mother’s Day weekend premiere, it’s the perfect post-brunch celebration of our unique upbringing. The Rialto Cinemas Lakeside hosts a benefit screening of ‘Babies’ on Friday, May 7, with a reception at 6:30pm and 7:15pm screening to benefit the California Parenting Institute and Better Beginnings. $20. 707.585.6108, ext. 20.