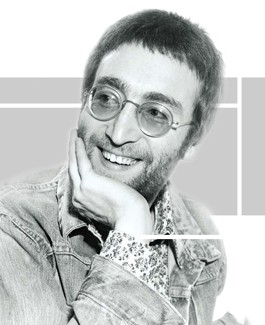 What if peace, not war, were the answer?

If you only had three or four words to encapsulate the moment when ’60s idealism gave way, the short phrases “No end in sight,” “Read my lips” or “Four more years!” would certainly spring to mind. Far more poignant, however, are “Hey, Mr. Lennon!”

I was only 11 months old the day Mark Chapman greeted John Lennon with those words and then shot him five times in the back with a .38 revolver. Because my parents shared Lennon’s music with me at an early age, his death has always hit me as something I had as much a right to cry over as any of the kids who gathered outside the Dakota on Dec. 7, 1980, to mourn the passing of their hero.

In the 1988 documentary Imagine: John Lennon, one fan describes the Beatles as something that “belongs to us.” With his quiet, revolutionary protests (you won’t see George and Laura Bush going to bed for peace any time soon) and determination to stand up to the forces of oppression, this is doubly so of John Lennon. Twenty-seven years after his death, his like has not been seen again, and the absence of a public figure both hip, edgy and intelligent remains one of the key reasons the youth movement has stagnated in the face of George W. Bush’s monstrous war-without-end.

John Lennon wasn’t a saint. Like most rock stars of the era, he drank, smoked pot, did heroin, was promiscuous and pissed off his former band mates when he went solo. His damaged psyche is on view for anyone who listens to his post-Beatles albums (“Mother” from Plastic Ono Band springs immediately to mind). It is exactly this kind of flawed humanity, however, that made him a legend. While admitting outright that he was “just a jealous guy,” Lennon captured the adoration of millions and did something no rock star or politician has been able to do before or since: he made peace cool.

“War Is Over! If You Want It” read the billboards he and Yoko Ono posted over New York in 1969. Such simple words, but they were heard. That same year, Lennon was included with JFK and Mao Zedong on ITV’s Man of the Decade special —and the American government began a campaign of harassment against him that would culminate in an attempt to have him deported and, eventually (believe it!), result in his tragic and untimely death.

Today, nothing like Lennon’s galvanizing presence exists for the generation coming of age in the shadow of Iraq. This is due in part to apathy. As Stephen Colbert recently quipped of my generation’s “efforts” to fight governmental tyranny, the best we can do is “make the Man sorry he ever visited your blog!” A revolution is dependent on many things, but one of the most essential ingredients is a charismatic figurehead, and despite some noble humanitarian efforts on our behalf, it’s hard to see someone like Sting or Bono telling Bush to fuck off.

Where he once penned “Pride (In the Name of Love),” Bono has begun cultivating a diplomatic relationship with the White House and, in his latest Rolling Stone interview, maintains his naïve optimism about our ability to overcome the chaos of the Bush years.

I doubt Lennon would have made nice with Bush. Then again, unlike Bono, Lennon wasn’t a rock star playing a diplomat. He was a revolutionary and a poet who could also play the guitar. Fame helped Lennon’s cause, but his true magic was in the way he made himself accessible as a person. When a troubled young man wandered onto his property looking for a god, Lennon not unkindly told him that “god” was just a man like anyone else. There was no artifice to Lennon. No leather-jacket gloss. And certainly no political correctness, a phenomenon that has now hampered the political dialogue to the point of impotence.

If John Lennon’s one contribution to the world had been his ethereal “Imagine,” with its haunting piano and simple, searing lyrics (“Imagine all the people / Living life in peace”), he would have done his job as an artist and a human being. But his ideas, especially the conviction that peace, not war, is the solution, remain a legacy to shame that of our plastic politicians.

Lacking a leader of his caliber, I suppose those of us still longing for peace have no choice but to become Lennon ourselves. John never waited for anyone to give him permission. Whether facing down skeptical reporters or posing naked on the cover of Two Virgins, he always did what was in his heart and did it with an honesty sadly unheard of in this day and age.

I hope some day we’ll join him. And I’m not the only one.