.Behind the Chador Curtain

Regardless of what the Bush administration might say, Iran today is modern, rhinoplasty-positive and decidedly non-nuclear 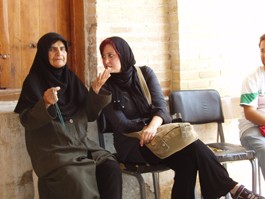 L ast summer, when President Bush declared the Iranian Revolutionary Guard to be terrorists, I was sitting in the lobby of a luxurious hotel in Tehran. New College of California coordinates two or three trips to Iran every year, but few in our group actually had any affiliation with the school; only four of us were students, outnumbered by professors and teachers.

Both Iranians and Westerners I spoke with over the following week agreed that Bush’s statement was a crazy escalation. No one defended the Revolutionary Guard, but now that it was branded like Hamas, Hezbollah and al Qaida had been, people seemed uneasy. One citizen saw Bush as a savior; many others were afraid after seeing lives in neighboring countries uprooted or ended in the name of “fighting terrorism.”

The terrorist designation perpetuates the myth of the Arab world, a tale of fanatical and extremist monoculture in Asia Minor. In this story, Arab culture is conflated with Islamic religion, and distinct ethnic identities like Kurds, Jews and Persians are overlooked completely.

Iran is 99 percent Muslim (89 percent Shiite and 10 percent Sunni), yet is not an Arab country—its language and culture are Persian. The Farsi language has completely different roots and grammar from Arabic, though it’s written using the same alphabet.

The name Iran comes from “Aryan,” describing two groups of nomadic peoples who had varying features (not the Hitler Youth look). The Pars (or Fars) and the Medes lived and migrated around areas stretching from India to Europe over 3,000 years ago. No nation has continuously dwelled on a land longer than Iran has. Part of Iranian identity is this knowledge of history going back thousands of years. People in all walks of life know of the vast Persian empire 2,500 years ago, the Arab invasion a millennium later and the Safavid dynasty 500 years ago, when Shiite Islam became the state religion.

Such a rich living history means that the events of 1953 are very fresh in the minds of Iranians.

That year, the American CIA removed democratically elected prime minister Mohammed Mossadegh from power. Mossadegh had nationalized the country’s oil industry, prompting Time magazine to name him Man of the Year in 1951. With more oil profits staying in the country, British oil interests lost their foothold there. To regain them, Britain worked with the United States on a CIA coup, eventually giving America the most leverage over Iran’s oil.

The coup marked the first time that the CIA had toppled a foreign leader. Led by Kermit Roosevelt Jr. (grandson of Teddy) and Norman Schwarzkopf Sr. (father of “Stormin’ Norman”), the first attempt failed, and Mossadegh’s people arrested the coup’s leaders. A mere three days later, “Operation Ajax” made another attempt, and this time replaced Mossadegh with Shah [King] Mohammad Reza Pahlavi.

The agency took what it learned in Iran and went on to stage coups d’état in Chile, Guatemala, Indonesia and more countries on several continents over subsequent decades. Beginning immediately after the Iranian coup, the CIA helped to install the terrifying Savak “security” forces inside Iran. Savak kept the Shah in power by eliminating any threat to the regime, whether radical or moderate. Trained by the CIA, they used torture and execution widely.

And then the Islamic Revolution of 1979 took most everyone by surprise.

Conservative religious leaders were the one group the CIA hadn’t bothered to keep tabs on. At the Shah’s palace, which is now a tourist site, an Iranian woman in her early 40s remembers the time. “We had no idea. We knew there was going to be a change; we thought it would be democratic,” she says. “We woke up and everything was different.” Women had to start wearing head coverings and long, curve-obscuring garments. The minimum marriage age for girls was lowered to nine. School curricula changed, stating that God had put the new leader in charge. Some schools closed altogether, and the remaining ones became gender-segregated.

Tens and hundreds of thousands of Iranians protested the new mandates loudly in the streets until they were arrested, threatened or otherwise silenced. People still attempt to speak out, print critical newspapers and organize labor. But the government kept closing newspapers and jailing labor organizers.

The new regime was more complex than is widely known. The fledgling Islamic Republic attempted to combine a democratic constitution with religious leadership, although Ayatollah Ruhollah Khomeini speedily quashed the diverse, nonreligious groups that had helped him overthrow the Shah.

W hat all groups had in common was a desire to get rid of U.S. influence. The U.S. Embassy is now defunct, of course, but the wall that surrounds the building is still filled with virulently anti-U.S. statements and artwork. It’s impossible to take them personally, since so much of Iran is accessible to English speakers. Street and highway signs are either transliterated or translated into English, kids learn English in school, even one side of the money is in English. Pretty welcoming to those of us coming from “the Great Satan.”

Many news stories cover President Mahmoud Ahmadinejad expressing the kind of sentiment similar to what we found on the walls of the former embassy. What those stories leave out is that he holds little actual power. In October, Democracy Now! hosted Juan Cole, University of Michigan professor and creator of the website Informed Comment. Cole clarifies, “Ahmadinejad is not commander-in-chief of the armed forces. He can’t order anybody to kill anybody. He can’t launch a war. He can’t launch missiles. Those powers are vested in the Supreme Jurisprudent, the Ayatollah Ali Khamenei. Ahmadinejad can, you know, cut the ribbons and open bridges and things like that.”

No one I spoke with in Iran supported Ahmadinejad. Of course, the more religious segment of the population tends to not be so interested in speaking to obvious Westerners. (Our pasty features and cheap headscarves that don’t even color-coordinate with the rest of our clothes are an instant giveaway.) But judging from people’s dress in the several busy cities I visited, a large majority is reform-minded. Iranian women can vote, smoke, drive, go to university and own property.

The mandatory headscarf for women and girls age nine and above tends to trigger outrage in Westerners—France even tried to ban them completely. Such a visible dress requirement makes it easy to get an idea of people’s politics. If a woman wears a brightly colored scarf with plenty of hair visible, that’s a sign of resistance. Often women knot their hair high on the back of the head, to help hold the fabric on while showing as much hair around the face as possible.

The all-encompassing chador (literally translated as “tent”), on the other hand, is a single piece of cloth that covers the head and drapes over all other clothes, hanging to the ankles. The chador designates religiously devout women, though sometimes it is required to enter a shrine or for some jobs, like teaching. One young woman I met, who had just been admitted to medical school, says that she enjoys a sense of security when wearing the chador if she is in crowded cities.

And the idea that the headscarf invokes meekness or passivity is laughable. Iranian women are animated, informed, outgoing, proud, welcoming, fabulous dressers and sometimes, really fast ski racers. (The majority of Iranian terrain is mountainous, with numerous winter ski resorts.) Being a female traveler in Iran is a great benefit in getting to talk to and learn from women there.

Incongruously, it is incredibly common for women in Iran to get nose jobs. You can’t walk on a city street or ride on the subway without seeing at least one small bandage across a nose. The classical Persian schnoz tends to be generous, and women there are no more immune to Western beauty standards than we are. Plus, faces get even more focus when you have to cover up practically everything else. Some say there is more plastic surgery in Tehran than anywhere else in the world, and though I can’t verify that, it is clearly a thriving industry.

What is more certain is the characteristic hospitality of Iranians, as emphasized in the Lonely Planet guidebook, which says that visitors can expect people to come up to them and personally welcome them to the country, sometimes offering an invitation to dinner after a few minutes of conversation. The book had been published in 2004, so I figured that in the current climate of nuclear weapons accusations, the hospitality would be toned down.

I couldn’t have been more wrong. Families, small groups of students or pairs of young mothers would come up to us, sometimes nearly hopping with excitement, and after a couple minutes offer us tea or dinner. One young father greeted us, asked where we were from, and then asked if there was anything he could do for us. People’s pride in their homes and in the country, and their eagerness to share them, especially with Americans, was like nothing I’d expected.

Luckily, you don’t have to go to Iran to experience the abundant hospitality. More Iranians live in the United States than any other country outside of Iran. So many are in Southern California that it’s sometimes called “Tehran-geles.”

I ran is a signatory to the Nuclear Non-Proliferation Treaty, under which it has the legal right to develop a full cycle of uranium enrichment. Such other countries in the region as India, Pakistan and Israel are not NPT signatories, yet have full nuclear weapons, not just energy.

In 2003, after Iran had helped the United States go after the Taliban in neighboring Afghanistan, then-president Khatami offered to negotiate with the United States on a wide range of issues. Everything was on the table, from nuclear programs to a two-state solution in Palestine and Israel. Condoleezza Rice and company ignored the offer (and rebuked the Swiss embassy for delivering it). Little wonder Iran is recalcitrant now.

The United States continues to antagonize. Last spring, the Navy began sending warships to the Persian Gulf, and by early July, the L.A. Times estimates half the entire naval fleet of warships was there. Yet the United States threatens to attack under “anticipatory self-defense.” Who is anticipating the need for self-defense here? It’s not like half of Iran’s military is parked just outside Washington, D.C.

Recent reports give much hope to avoiding a conflict. Though the Bush administration continues to posture, its own National Intelligence Estimate report released at the end of November shows that Iran has shelved its nuclear weapons program. (The International Atomic Energy Agency has been saying as much for years.) This report is analogous to the announcement of the lack of evidence for WMDs in Iraq. At least this time, the information went public before any bloodshed.

The New York Times travel section in December ranked Iran as 18 on the list of “The 53 Places to Go in 2008.” (San Francisco ranked 39—perhaps the city is a more looming threat?) Of course, tourism is no guarantee that U.S. interests won’t exploit the region. (For one quick example, South Africa welcomed wealthy tourists before apartheid started making the headlines.) But for now, it’s a hopeful indicator that for the time, at least, we won’t be dropping bombs all over Iran.