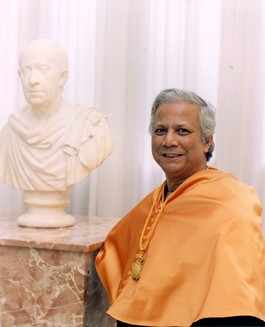 W hile working as an economics professor in the mid-1970s, Muhammad Yunus took his students on a field trip to a poor Bangladeshi village where local women built stools from bamboo. Yunus was stunned to learn these industrious women had to borrow money—with interest rates as high as 10 percent per week —to buy their raw materials. After paying back the loans, the women were left with a single penny in profit.

Yunus, who’d learned from his mother the virtue of helping the poor help themselves, pulled out his wallet and lent $42 on the spot to this cooperative of 27 women to help them escape the clutches of the loan sharks. “I was shocked to see how poor people suffered because they could not come up with small amounts of working capital,” Yunus said. “The amount they needed was less than a dollar per person.”

This was not a gift; Yunus, who appears Jan. 17 at Book Passage, did not ask for any collateral but expected the money would be paid back. It was, and he used those funds to help another group of women wean themselves from usurious lenders. Thus the concept of microcredit was born.

Buoyed by the idea that tiny amounts of capital could make a huge difference to people struggling against poverty, Yunus went on to found the Grameen Bank (“Grameen” means “village”) in Bangladesh. He was assailed by capitalists who said the no-collateral model would fail and by fundamentalist Muslims who told prospective borrowers they’d be denied a Muslim burial if they applied for a loan. (Islamic law forbids money-lending with interest accrual.)

Despite these hurdles, Grameen has been stunningly successful, helping millions of families lift themselves out of poverty. By mid-2007, the bank had lent over $6 billion to more than 7.4 million borrowers. Over 94 percent of the borrowers were women, because Yunus believes that women who become financially healthy help their families first. More than 98 percent of these loans have been repaid, a rate Yunus says is higher than that of any conventional bank. The “microcredit” model has spread, and Yunus says it’s helped 100 million people worldwide.

In 2006, Yunus won the Nobel Prize “for efforts to create economic and social development from below.”

Today, Yunus has set his sights on a much bigger task: affecting the economic model from above. His goal is to enlist capitalism in his social mission, to help create socially responsible companies that make poverty a memory by 2030. To that end, he’s using his $1.4 million Nobel Prize award to start a company that makes nutritious food at low prices and to fund an eye-care hospital.

He also believes that not only can established companies be drafted to serve in the war against poverty, they’re eager to help. He outlines his vision in his hopeful new book, Creating a World Without Poverty: Social Business and the Future of Capitalism. He’s also the author of Banker to the Poor, his autobiography.

Next ArticleBack with a Bang