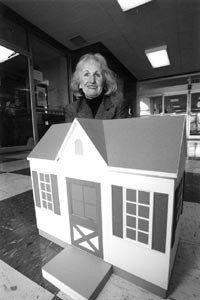 High-density housing goes hand in hand with urban growth boundaries. So why isn’t anyone willing to talk about it?

HIGH-DENSITY affordable housing sure has a lousy reputation: monolithic facades, postage-stamp yards, slovenly upkeep, breeding ground for crime. No one wants that kind of a project in the neighborhood, right? Since the bulk of home construction in the county continues to be the politically palatable suburban ranch house, most Sonoma County residents haven’t had to grapple with the issue.

But with the onslaught of urban growth boundaries in Sonoma County, coupled with the region’s ongoing population boom, the key to the future may be high-density housing.

“There’s a disconnect between the mental picture of what people see high density meaning and what it really means,” Green adds. “You have to deal with neighborhood organizations who think that affordable housing means crack housing, which is absurd. Neighbors get all in a twist at the idea of low-income housing. Affordable-housing [residents] in Sonoma County–you’re talking about dentists.”

Sonoma County, with its rolling hills and open pastureland, seems to invite endless development. Cookie-cutter subdivisions with bucolic-sounding names abound. But the supply of land isn’t endless, and voters have made it clear that they want to curb growth and contain sprawl. In 1996, Sonoma County became the first in the nation to establish comprehensive growth boundaries by voter approval. Santa Rosa, Sebastopol, and Healdsburg adopted boundaries, followed two years later by Cotati, Petaluma, and Windsor.

Rohnert Park is revisiting its four-year boundary, and Sonoma is considering jumping on the bandwagon. And Sonoma County is hardly alone. Urban growth boundaries have been approved in a dozen cities around the Bay Area.

A growing number of environmentalists and urban planners say that the easy part is adopting growth limits. The tough part is getting people to live within them–which means letting go of a keystone of the American Dream: the spacious home with white picket fence, mammoth yard, detached garage. It’s too soon to determine the impact of Sonoma County’s newly inducted growth boundaries. But one thing is clear: development will eventually bump up against the boundaries. The question is how to accommodate the county’s projected 116,000 jump in population over the next 20 years–without pushing the boundaries out.

The answer lies in clustering smaller, more densely compacted homes near mass transit and jobs, and leaving open space–well, open, rather than covered with sprawling ranchettes.

In Silicon Valley, where a building boom has cut the residential land inventory in half in less than five years, a report by Strategic Economics in Berkeley calculated that communities there could provide for up to 99 percent of the growing workforce by embracing higher-density housing. Sonoma County affordable-housing advocates say the same is true for the North Bay area.

“We can’t go out. We have to go up,” says Petaluma housing director Bonne Gaebler. When the Petaluma City Council recently approved an 88-unit development on four acres, its only question was why the project didn’t go up three or four stories.

“And it’s in a residential neighborhood,” Gaebler says. “Our council is trying to walk the talk.”

But in Sonoma County, Petaluma seems to be somewhat of an exception. So far, local planning efforts have done little to slow the pace of single-family home construction.

In Santa Rosa, the percentage of single-family homes compared to multifamily units has ballooned precipitously since the mid-1980s, when half of the homes built were multifamily. In 1997, just 2 percent of the homes built were multifamily. And the single-family homes aren’t exactly winning praise from environmentalists or affordable-housing advocates. “People are calling them McMansions,” says Chris Brown of Greenbelt Alliance. “It’s a retiree with a 3,000-square-foot home with four bathrooms. One for the wife, one for the husband, one for the dog. It’s people with too much house.

“People should be able to buy whatever they want. At the same time there are lots of people who can’t buy anything because there is so much land being taken up by huge expensive houses,” Brown adds.

“We are going to have to make a choice,” Green says, “between paving everything we love about this place and living at higher densities. Thus far, most of the city councils have just failed to stand up to developers who just want to do the same old turn-the-crank subdivision out of lack of vision or unwillingness to take a chance.”

Tim Coyle, senior vice president with the California Building Industry Association, puts the onus on “political opposition” as the barrier to higher-density development.

“To say theoretically that home ownership will take the form of stacked housing is to mistake what the public is demanding. Most Americans prefer a detached single-family home,” Coyle says. “If the market suddenly changes so that they suddenly want higher-density multifamily housing, then we’ll build it.”

Poppycock, Green says. People need to be educated about housing options. And if developers came up with innovative, well-designed projects, the demand would be high.

“Three stories, with shops below, a real mix of residential, commercial, and offices, so that you have a village-style community again,” Green muses. “Where those things get built, they are incredibly desirable. The transit-oriented housing in Portland, Oregon, is the most valuable rental property on a square-foot basis in the area. It’s a great place to be.”

On the front lines: Attorney David Grabill is representing plaintiffs in a housing suit against the county. Construction of multifamily housing has less to do with politics and market demand and more to do with financing and vacancy rates, says Santa Rosa’s Community Development Director Wayne Goldberg. The climate for multifamily housing clearly is getting rosier: In 1998, the city issued permits for 600 units of multifamily housing, compared to a paltry 12 units the year before.

“The city doesn’t build housing, developers build housing, and they have to get loans and financing. There are a lot of people involved in those decisions,” Goldberg says. “When the vacancy rates are higher, people are not going to build apartments in that market. When they get as low as they have recently, a number of units are coming on line.”

Housing density is one of the crucial issues in a lawsuit against Sonoma County. The lawsuit charges the county with failing to comply with state housing laws that require jurisdictions to facilitate the development of affordable housing.

“There has been a very, very strong resistance in county government to high-density housing where the need is very great,” says Santa Rosa attorney David Grabill, who filed the lawsuit on behalf of the Sonoma County Housing Advocacy Group, as well as three plaintiffs who have been unable to find affordable housing. “It’s just a battle every step of the way.”

In an attempt to settle the lawsuit, the county recently hired a consultant to search for housing sites for low- and very-low-income residents. “We’re hoping that the survey will identify some land the county could rezone for high-density affordable housing,” Grabill says. “We’re not optimistic that they’re going to do it voluntarily. We expect that it’s going to end up having to be decided by a judge.”

If Grabill wins, he says, it could mean that the county would be barred from issuing any construction permits as long as the housing element remains out of compliance. “But the county can appeal, we can appeal,” Grabill says. “It doesn’t mean we’re going to get any houses built.”

Sonoma County Supervisor Mike Reilly counters that unincorporated county lands are the wrong place for high-density housing. “The thrust of our general plan since 1979 has been to try to protect the agricultural and rural areas from a lot of development and try to direct most of the development into the incorporated areas along the 101 corridor,” he says. “People in the cities have told us, through the urban growth boundaries, that that’s what they want.”

Urbanized, high-density development belongs in the cities, Reilly adds. “The county gets responsible for everything else. We’ve got the big regional parks, farmland. You don’t want the same level of urbanization in those areas. It’s not good planning.”

STILL, REILLY CONCEDES, the issue of affordable housing is at a critical juncture. “I think there needs to be a real dialogue between the environmental community and the people concerned about affordable housing. We need to see if there is common ground there. The market clearly has taken everything out of reach.

“My brother moved out from Maryland and wanted to live in Sonoma County,” Reilly says. “He was catatonic with sticker shock at the housing prices. He’s now living in Vacaville.”

Many folks are in a similar position. And it looks as though the exodus of people settling for housing in outlying areas may continue, since few planners predict a high-density housing boom just over the horizon.

“Everyone likes these good ideas until they come next door,” says Greg Carr, Sonoma County’s manager for comprehensive planning. “That’s what’s difficult. In an area like Bennett Valley where the housing is well maintained, in a homogenous neighborhood, you’re unlikely to have anyone interested in higher density. . . . You have to wrestle with how it fits in the neighborhood.

“Cities aren’t going to rush in and start adopting 30- to 40-units-an-acre housing projects just because of urban growth boundaries,” Carr adds. “I wouldn’t expect to see those types of changes until they started doing updates and started running out of land.” *

OAKLAND ARCHITECT Mike Pyatok’s professional goal is to make affordable housing welcome in a community. How does he do it? By paying attention to schmutz and schmaltz.

“Rental housing is often disliked by the homeowner communities because the amount of design that goes into it is often minimal,” Pyatok says. “We need to be sensitive to the cultural preferences of homeowners.”

Pyatok uses updated interpretations of Craftsman, Mission, Victorian styles–the schmaltz–to give affordable housing the look and feel of something well crafted and more expensive. Schmaltz, he says, helps the permit-approval process along, as well as fostering neighborhood acceptance.

“Part of it is to be a good neighbor and to fit in so the people can live there without being stigmatized,” says Pyatok, whose firm designs about 80 percent of its projects for non-profit affordable-housing corporations.

The Pyatok-designed Tower Apartments in Rohnert Park have won several awards, and the development is a far cry from the typical stacked flats housing six families around a common stairwell. The project has 25 units an acre with two- to three-story buildings sharing large courtyards. In addition, all the units have back patios or terraces–which is where the schmutz comes in.

“Schmutz is the messy, dirty side of life,” he says. “Everybody’s house has a front, sides, and back. The back is where you can let your hair down and relax. Multifamily housing should have the same opportunity.”