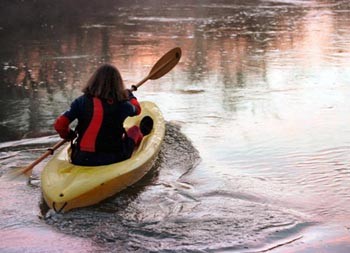 Nature’s way: Amid the serenity and grandeur of nature, kayaking along the Russian River can contribute to a sound mind and healthy heart.

Life on the water–a meditation on kayaking the Russian River

WITH THE KAYAK gliding along, the rounded head, broad snout, and enormous dark eyes of a critter sinking quickly beneath the surface shouldn’t startle a first-time paddler. Especially since in this neck of the woods, it’s way more likely to be a seal or sea lion than a gator.

Instead, it’s this chance to view the abundant and diverse animal and plant life from the eye level of a harbor seal that makes paddling the lower Russian River endlessly fascinating.

There are as many reasons to love Sonoma County’s natural environment as there are people to describe it. With all its variety one characteristic connects the region: a river flows through it.

When I first moved to Sonoma County some 20 years ago, I missed San Francisco terribly. But I soon fell in love with the Russian River and its beautiful twisty course past Monte Rio cabins, ancient stands of redwoods, and firs near Duncans Mills, to the mouth at Jenner. I still cannot resist the lure of the river, and I return again and again to the same places, always feeling like a tourist.

When my kids were small, my best-loved summer days were spent on the Russian River. While some friends favored quiet, out-of-the-way beaches, We preferred Monte Rio beach. We liked the snack-bar food, swimming in the shallow warm water, lounging on the beach, soaking up the sun’s heat.

With our striped towels, plastic pails and shovels, beach chairs and umbrellas, we’d spread along the ecological edge of the river like migrating shore birds. Though it’s hard to believe now, not many years ago you could spend entire days among vacationing strangers and never hear cell phones or beepers.

The cacophony of children playing, the idle chatter of adults, the noise of loud and guffawing teens, and even the occasional sounds of a baseball game wafting from a radio reminded me of my noisy childhood outings to crowded East Coast beaches.

For me, looking at Guerneville artist Mary Robertson’s luminous paintings of the Russian River invariably recalls these summer afternoons. She perfectly captures the filtered late afternoon light on the river that makes everything appear lit from within.

On the hottest afternoons, my kids and I would paddle upstream on a flotilla of tubes and rafts. As the kids got older, we’d rent canoes, venturing farther and staying away from land longer. That’s when I first learned to distinguish the screech of an osprey from that of other raptors. One afternoon I drifted past a large turtle sunning itself on a rock. The importance of the river as a home to wildlife is easier to see when you’re skimming its silken surface like a sea otter or a harbor seal.

Canoes are fine, but tippy, and after years of piling kids in canoes, I longed to paddle on the river by myself. Finally, a little over a year ago, a friend and I bought several used kayaks. They’re the sit-on, self-bailing, polyethylene type. With a lifejacket, paddle, wool socks, and polar fleece pants, for me venturing on the Russian River is practically a year-round sport.

This is what I’ve discovered. No matter where you put in on the lower Russian River, once you’re afloat, the hustle of modern terrestrial life instantly retreats. Paddling toward the sea from Duncans Mills makes me feel like an Aleutian explorer.

The Russian River supports a huge number of bird species. I’m now a bird watcher. In a little over a year of observing birds from my kayak I can identify dozens of different species of waterfowl and raptors, including ospreys, red-tail hawks, kingfishers, kites, all types of herons, egrets, cormorants, ducks, and geese.

A friend who has toured rain forests throughout Central and South America says that while kayaking the lower Russian River she’s spotted a greater variety of exotic birds and in larger numbers than in any other region in the world. And like so many coastal residents, these birds are relatively undisturbed by kayaks.

I often float by statuesque great blue herons hunting by the shore without ruffling feathers. I’ve watched more than one osprey–the only raptor that hovers over the water and plunges into it feet first for fish–grab a wriggling fish from the water a few feet from my kayak and fly off with it.

Near the mouth of the river at Jenner brown pelicans gather in the fall. These huge, lumbering birds–which look more like Disney creations with their long bills and wide flapping wings than the efficient fisher-birds they are–were nearly lost in the 1960s and 1970s owing to pesticide poisoning, specifically DDT. The ban on DDT helped brown pelicans make a dramatic comeback by the mid-’80s, writes naturalist Susan Tweet in Seasons on the Coast. Unfortunately, according to Tweet, fisher-birds throughout the world are still threatened because DDT continues to be widely applied in South America. In the United States, residential use of pesticides is skyrocketing, and some of them degrade into DDT.

Harbor seals–the shy, cow-eyed pinnipeds that are seen lolling at the mouth of the Russian River–are awkward and easily startled on land. But in the water they turn sleek and graceful and seem friendly and curious. It isn’t uncommon for them to pop up alongside a kayak and keep pace for awhile.

“Hey, lady,” yelled a kid one day last fall. “Otters are following you.” Sure enough, I looked back and saw three sleek otters. Quickly the otters sped passed me, and soon I was following them. Unlike harbor seals, otters are as graceful on land as they are on in the water. And if playfulness is any measure of intelligence, some wildlife experts say, these fun-loving members of the weasel family may the smartest of all wild animals. The three otters–possibly a mother and her young–swam from riverbank to riverbank. They scampered up the banks, rooted around, tumbled over one another, all the time blissfully unworried about my presence or perhaps even putting on a show for my benefit.

One afternoon I spied a mountain lion creeping down a hillside and drinking from the river, only to vanish into the woods seconds later. On New Year’s Day, back on land after a day of kayaking, I peered through binoculars, transfixed by a bobcat pouncing on a gopher in the fading sunlight.

You can travel the globe, watch nature shows on cable, or scan the Internet for information about wildlife. Or you can kayak the Russian River and see more species of birds, water creatures, and other animals in a single afternoon than most people see in a lifetime–and get a cardiovascular workout in the process.

THE FOLKS at the headquarters of the Russian River Recreation and Park District recommend kayaking on the river in the summer and fall. The river is usually flat then, making it safe for people of all ages and skill levels.

You can also launch a boat from the Willow Creek environ-mental campground. You have to haul the boat from the parking lot to the river. Day-use fees are $2 per car per day. For more information, call Russian River District Headquarters at 865-2391.

Several local companies will give you boating lessons, haul and rent kayaks, and serve as guides. Check the local yellow pages for more information. In Duncans Mills, call Gold Coast Kayaks at 865-1441.