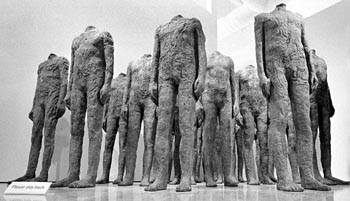 Crowd scene: Art is on the march at the Hess Collection Winery in Napa, which houses some of the most compelling art in the North Bay, including Crowd, by Polish sculptor Magdalena Abakanowicz.

Pour on the Art

STARTLING. That’s the only way to describe it. You unsuspectingly round a corner inside the airy, elegant art gallery at Napa’s Hess Collection Winery, and suddenly there they are . . . about 18 life-size, headless figures that seem to be advancing toward you from one corner of the room.

Quite a jolt. But the piece, which resembles an eerie army on the march, is just one of many vivid and thought-provoking surprises awaiting visitors at the winery’s permanent exhibition of contemporary art, which Art in America magazine calls one of the top 200 collections in the world.

The piece, titled Crowd and fashioned from resin and burlap by Polish sculptor Magdalena Abakanowicz, sometimes even spooks the Hess staff, as employees laughingly admit during a tour of the facility.

Wealthy Swiss entrepreneur and winery founder Donald Hess, 62, reportedly believes Crowd symbolizes the mindlessness of living in a totalitarian state. Not that Hess himself is around to comment, mind you. The elusive art collector, winery creator, and mineral-water magnate lives in London and jets in to check on the Napa winery and art gallery every couple of months.

A dedicated cadre of staffers keeps the facility running like clockwork between his visits. They’re eager to talk about their multifaceted boss, who has successfully blended and showcased his two passions–art and wine–under one sophisticated roof.

According to Roberto Ceballos, supervisor of the Hess Collection Visitors’ Center, Donald Hess started collecting art in the 1930s. “It was a certain rebellious move, since [Hess’] father believed walls should be left white,” says Ceballos, adding that Hess essentially taught himself about the world of art. “In the beginning, he bought a print and didn’t realize for a long time that it was an original Picasso!” he says with a laugh.

The fascination bloomed, and these days Hess owns art collections in Switzerland and England, and keeps some works in storage, in addition to the permanent exhibition in the Napa facility. After decades of careful purchases, he has assembled the most important art collection in the wine country, according to Gay Shelton, director of the Sonoma Museum of Visual Art in Santa Rosa.

“The Hess Collection showcases artists who’ve made history around the world with their work–they’ve all had some impact in the formation of culture,” Shelton says. “It’s like something you’d see at a major museum.”

YOU REACH the property by wending your way up the twisty Alpine-like road of Mount Veeder. The grounds boast terraced gardens and a reflecting pool that in the summer is filled with water lilies.

The two ivy-covered limestone buildings of the original winery (formerly the Christian Brothers’ Mont La Salle), which date back to 1903, have been carefully restored. One of the historic structures now houses the art.

This personal collection consists of about 140 pieces on two main floors of gallery space, including works by such internationally acclaimed artists as Francis Bacon, Robert Motherwell, Frank Stella, Magdalena Abakano- wicz, Gerhard Richter, and many more.

“[Hess] doesn’t try to collect from a particular country. He just has to feel passionate about the piece,” says Ceballos, himself an artist.

Hess has amassed his collection in painstaking stages, getting to know each artist as he goes. The winery founder says that before he purchases art he must be so haunted by a piece that he wakes up thinking about it.

“[Hess] always has to walk away, then be drawn back later before he’ll buy a piece,” Ceballos explains.

The gallery is spacious, airy, and minimalist, with a soaring entryway. It’s all crisp white walls and ceilings, subdued lighting, and huge stretches of bleached oak floor, as polished and expansive as an ice rink. Shafts of weak winter sun slant down from window skylights that offer idyllic views of the terraced vineyards on the steep volcanic slopes of Mount Veeder.

The whole effect is calm and glacial, with lots of white space. It’s perfect for contemplating the stunning diversity of art in the collection.

Super Wall Flower by American artist Alan Rath is an electronic swirl of aluminum, ropelike cables, and large speakers all entwined on one wall. The piece, which is motion-sensitive, seems to come alive as you pass by. Another piece by Rath, called Clock II, makes use of cathode-ray tubes and garish green and yellow LED screens to depict human hands.

Things aren’t always what they seem. A bronze sculpture by Dutch artist Armando that appears to be a flag could just as easily be a hatchet. And what looks like errant infantile scribbling by American artist Bruce Robbins is actually the intricate depiction of an aerial view of the path forged by migrating elephants through long grasslands. The piece, titled Elephant Crossing, was created using oil and encaustic on canvas.

Two works by the Scottish Boyle Family are studies in stark reality. White Cliffs of Dover is a realistic craggy crevice complete with sprouting vegetation and a trickle of red-brown rust, while Lorry Park with Concrete Kerb looks like a massive chunk of mud decorated with tire tracks, footprints, and crushed Coke cans.

One painting, Flight by Gilbert and George, deals with wine drinking–and hints at Hess’ sense of humor. A flock of airborne people soars above two figures holding wine glasses. At the bottom of the picture, the flyers’ heads are strewn about on the ground. The obvious interpretation is that wine guzzling can make you fly high, but later you crash with an almighty headache.

The most recent additions to the collection are several works by Robert Rauschenberg, an artist who believes everything has a use after it’s been discarded and who is a master of creating poetic pieces out of garbage.

The Rauschenberg works–which are temporarily filling in for several pieces now on loan in England–have previously graced the Guggenheim Museum and London’s Tate Gallery. Four pieces are on display for the first time ever in California–which underscores the fact that North Bay residents don’t have to go far to encounter landmark works of contemporary art.

“If you’re interested in getting a taste of contemporary art, [Hess] is a great primer locally,” Shelton says. “It’s a world-class collection.”