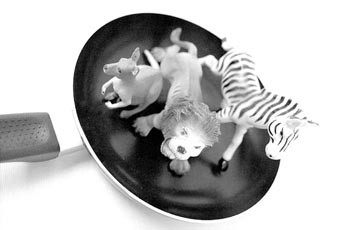 Diners discover the wild side of the animal kingdom

VENISON: it’s what’s for dinner. Rabbit: the other white meat. Now those are a couple of marketing slogans you’re never going to hear. Bambi and Thumper are way too ingrained in the public consciousness for game meat and birds to make the leap any time soon from specialty butcher item to Foster Farms family pack.

When chefs and caterers try to bridge the gap between exotica and everyday eats, they run into some of the same issues. For example, Munther Massarweh, chef at Bistro of Glen Ellen, says he has difficulty in keeping up with the demand for his trademark wild boar chili, which is gobbled up at a rate of 25 gallons a week. “I have found that the demand is going up,” says Massarweh.

At the same time, his waiters still field comments about the few wild items on the menu.

Michael Hirschberg, owner of Mistral in Santa Rosa, holds a game dinner every fall. This year’s sold-out dinner featured smoked trout, quail, and venison–not very risky, as far as game goes–but Hirschberg still feels that diners were ambivalent about the food. “Pinot noir was the big attraction at the game dinner,” he says wryly. “The game was tolerated to get to the Williams-Selyems.”

Bruce Reisman, owner and executive chef at Park Avenue Catering in Santa Rosa, recalls the game festival that he used to put together every year between 1986 and 1993 at Buono Sera in Petaluma. On the menu were such offerings as kangaroo, mouflon, rattlesnake, bear, and lion–all free-range from ranches with tens of thousands of acres.

Inside the restaurant, the response was great, says Reisman, but he recalls that for at least the first few years there were protests outside. “I took time to talk with the protesters,” says Reisman. “Maybe they understood a little where I was coming from, although we didn’t agree.”

Reisman and other chefs are puzzled by the slow growth in demand for game in the United States. They cite the agreeable flavor and generally lean flesh, not to mention the fact that the meat is antibiotic- and hormone-free, as reason enough to include it in a healthy diet.

Furthermore, says John Ash, culinary director at Fetzer Winery in Hopland and author of American Game Cooking, game is an important part of America’s culinary heritage. “People are beginning to look for their roots, for their heritage,” says Ash, who grew up eating game on a Colorado ranch. “And the fact is that many of us come from that background, where eating game was not a luxury, but actually a survival dish.”

Joey Altman agrees. The chef and owner of Menlo Park’s Wild Hare, where more than 60 percent of the menu is based on game meats and poultry, sees a distinct gap between younger, more tentative customers, and older folks, who tend to be much more open to eating game.

“Older people will talk about eating their father’s venison, and about growing up in middle America, where they ate rabbit and duck and all this other game,” says Altman. “Back then people were less picky.”

THE AMERICAN taste for game faded at the beginning of the 20th century, when increasing urbanization pulled people into cities and away from the source of food. At the same time, new developments and discoveries in food health and technology clamped down on the purity of sources and preparation. The result is a double-edged sword. All game served to the public in restaurants must be farm- or ranch-raised, tagged and inspected by the USDA as carefully as any cage-bred chicken. Although the various species remain wild, with distinct physical characteristics that distinguish them from their domestic kin, game in restaurants is never truly wild.

As a result, today’s game dishes are much less gamey than they used to be, which goes a long way toward soothing diners’ ambivalent feelings. Now that he’s in catering, Bruce Reisman finds that the milder offerings–ostrich, quail, and rabbit–get the most play. (Ostrich in particular is still coasting on a wave of mid-’90s popularity that has landed it a solid place in the meat cases of a few upscale grocery stores.) Meanwhile, Joey Altman says buffalo is a favorite at his restaurant precisely because it lacks that “distinctively gamey” flavor. It’s like beef, he says, only leaner. (Oddly, some beef producers are now turning their cattle out to free-range to develop a “wilder” flavor.)

But then there are chefs like Altman who think that game in all its glory still stands a chance with the finicky American public (or at least the part of it that goes out to eat). At Wild Hare, he offers innovative global cuisine featuring game–rabbit imperial rolls, ostrich satay, and venison stir-fry–as well as traditional preparations. The meats range from “normal” and mild (poultry or fish) to the really gamey preparations (wild hare is the strongest he offers).

At Manka’s, the restaurant attached to Inverness Lodge in Marin County, diners come specifically for the game, as they have for the past 20 years. Game meats and birds are well integrated into every menu, and the demand hasn’t changed much over the years, says assistant chef Daniel DeLong. “People just eat game here because it’s the right thing to do,” says DeLong. “We’re in the woods, it’s pretty rustic. It fits in with the sense of place.”

Joey Altman says that his clientele, like that of Manka’s, is self-selected to enjoy game, but argues that the general public just hasn’t had the chance to decide one way or the other. Game’s relative expense hinders many restaurants from serving it (at wholesale, bison filet mignon is $21 per pound, beef filet mignon is $6), and a lot of chefs just don’t want to take the time to educate their staff and their customers about the new game meats, says Altman.

“It’s not really put in their face to respond to, one way or the other,” he adds. “It’s like asking what they think about escolar [a deepwater fish of tropical and temperate seas]. ‘I don’t know,’ they’d say. ‘I don’t know what it is.’ So I wouldn’t say there’s a strong anti-game sentiment. The public just hasn’t been asked to choose.”