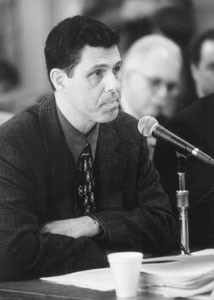 Under the proposal, presented to the Santa Rosa City Council by Police Chief Mike Dunbaugh at a study session last week, police would meet with a homeless person to determine if a family member might be willing to put a roof over his or her head. If a hospitable relative can be located, police would issue a bus ticket home.

The proposal, called the Homeless Evaluation Liaison Program, or HELP, is based on a 7-year-old program of the same name in Reno that the Santa Rosa Police Department says has been very successful.

But not everyone agrees with that rosy assessment of HELP. One Reno advocate for the homeless says the program raises significant questions that its organizers there don’t seem to be able to answer.

“It sounds nice and it may do some good, but people shouldn’t think it’s the answer to the homeless question, ’cause it isn’t,” says the activist, who wants to remain anonymous because he works closely with city officials on homeless issues.

Here are two of the biggest questions about the program: How do HELP organizers know people aren’t getting off the bus and quickly becoming homeless again? And how many people who are bused away end up returning to the streets of Reno?

“They have no statistics to show that isn’t happening,” the activist says. “Are these people truly better off? Without statistics, how do we know?”

“Many of us feel, let’s take them, get them job training, get ’em into rehab, instead of sending them home and hoping their families can straighten them out,” the activist continues. “If a guy has a major drug problem, just sending him back to his brother in some other state is not going to solve the problem.”

Members of the Santa Rosa City Council were generally supportive of the HELP proposal, though some expressed concerns.

“I think it’s a tool that we can add to the toolbox to help the homeless,” says council member Noreen Evans. “There’s no one-size-fits-all solution, but this program may help some people who otherwise wouldn’t be helped. That’s my goal in supporting it.”

But Evans wants to be sure that the program is voluntary: “My main concern is that nobody’s civil rights would be violated,” she says, adding that she thinks the program should include some networking with social service agencies in cities where people are being bused. Evans also favors the inclusion of an evaluation mechanism.

Tracking the success rate of the program is fine with the Santa Rosa Police Department, according to SRPD commander Rodney Sverko. “We’d want to set some goals for the program,” Sverko says. “We wouldn’t want to be accused of just shipping people out to the next city.”

But even if all concerns about the program can be addressed, Sverko says getting HELP approved and implemented could take some time. The earliest it would take effect is July 1.

“Right now, it looks like it’s just on hold,” Sverko says. “It has to have a dedicated police officer for the program, and we need about $80,000 plus the salary. So I don’t think we’ll see anything happening for a while.”