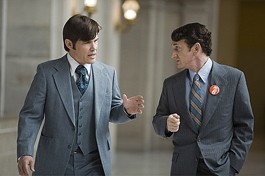 'Milk' biopic reminds of a Bay Area before hope

Biopics are notorious for bleaching a director’s style; they turn every moviemaker into Taylor Hackford. One of the many surprises of Milk is that it is thoroughly a Gus Van Sant film. The use of negative space, the concentration on quiet moments of people chafing in their own skin, could only be the director who had been working on so many experimental films—some of them exasperating, yes.

The boldness is seen early on. Not very long into the movie, Van Sant tells the fate of Harvey Milk through a real TV news clip of Dianne Feinstein on Nov. 27, 1978. Milk follows 10 key years in the history of the gay liberation movement, giving all the visuals needed to make you realize what an astounding journey it was.

Milk‘s intelligence shows at the beginning of the end of the film, a bull and matador scene where Josh Brolin’s drunken Dan White confronts Sean Penn’s Harvey Milk at a party at City Hall. Both men are two small figures in the corner of a large chamber. White is almost violent, but he’s also almost ridiculous. He seems so lost that it might be possible to enlighten him, to tell him that gay liberation wasn’t going to be the end of the world. You can see why Harvey Milk risked it, trying to appeal to White’s tolerance.

In this telling, Harvey Milk began as just another furtive gay guy on the IRT, picking up one Scott (James Franco) on a staircase, leaning against him against the white tiles of an off-screen subway station. This is the evening Milk turns 40, and he’s a little too old for this pickup. But he has a good way with words and manages to convince Scott to come home with him.

The two run away to San Francisco in the early 1970s. There Milk starts a camera shop on Castro Street. Some of the locals hate the new arrivals. The police harass and beat the homosexuals whenever they get a chance. After organizing the neighborhood, Milk takes up local politics. Running for state assembly and then supervisor, Milk bypasses the Democratic machine at first. District elections give him a power base and finally a chance to become a national hero: the first openly gay city politician.

The backlash comes fast. The former beauty queen Anita Bryant leads a campaign against a gay rights ordinance in Miami. This Palin of her time flaunts the old fear, claiming children will be recruited to a deviant lifestyle. Thus Milk’s standard speech opening: “My name is Harvey Milk, and I’m here to recruit you.”

Milk’s regular opponent on the Board of Supervisors, Dan White, is probably the most hated figure San Francisco ever produced. Yet Van Sant is a big enough artist to see things from White’s side. Brolin has done some startlingly good acting over the last couple of years. He hasn’t surpassed this creation, though. Milk perplexes White to the extreme; the gay man tries to be friendly, but he can’t resist teasing this solitary, strange ex-cop, a beefy Irishman in a mortician’s black suit. Milk thinks White is a closet case. Fortunately, that’s too simple an explanation for Van Sant and Brolin. In this sensational bit of supporting acting, Brolin makes otherness, discomfort and mysterious shame seem fascinating.

A film this timely is rare. Usually, movies lag, coming a year and a half after whatever public mood came and went. We can accept Milk‘s message of hope because we’ve lived to see the uselessness of Dan White’s last-ditch attempt to stop history. Penn plays Milk as a cordial, suave and funny man, but with a habit of secrecy; this hero is a man who is fun to watch. That’s the last thing you expect from a martyr’s biopic.

And rather than a sense of hopeless loss, Milk leaves you with a sense that progress can win, beginning as it does with documentary footage of police raids on gay bars, and ending with a river of candlelight rolling down Market Street from the foot of Twin Peaks to City Hall.