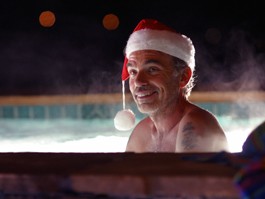 Across the wide spectrum that is holiday cinema, from adaptations of Dickens’ Christmas Carol to variations of the Santa Claus story, there are a number of conspicuous recurrent themes and archetypes: orphans, misers, bad people turning good, good people being tested but remaining good, miracles—and dead people. Adaptations of A Christmas Carol, even the Muppet version, are rife with the looming specter of death. The legend of St. Nicholas, if one does the research, reveals a Christmas miracle in which the good Bishop Nicholas discovers the severed bodies of three children stuffed in a pickle barrel, and after sewing the kiddies back together Frankenstein-style, brings them back to life.

There is a surprising amount of darkness in Christmas films, including the perennial It’s a Wonderful Life, the story of a bitter manic-depressive who attempts suicide on Christmas Eve but is saved by a clumsy angel and a pocketful of rose petals. Merry bloody Christmas. It is also notable that, from the beginning of cinema to the present, there are a surprising number of Christmas-themed films involving crime and criminals. What in the name of angels and snowmen could that be about?

“Maybe it’s an intentional exploration of the whole idea of sin and sinners, that promise of redemption that is such a big part of the story of Jesus,” suggests therapist Jill Silverman, director of the Petaluma Counseling Center. “He’s the one who sees the good in the sinners, the prostitutes, the criminals, and offers them a way to contact their own inner goodness. It seems that in a lot of these holiday films, we get a criminal, someone who has not been doing good deeds, and puts them through an experience where they end up operating out of a higher level of goodness.”

So, even when it’s a film about murderers and pickpockets discovering less selfish ways to wield their talents, a recurrent idea in many of these crime-themed Christmas films, the ultimate message is one of morality?

“These movies are almost always about selfish people who discover, by accident or by providence, an ability to exercise moral reasoning to be able to see the difference between right and wrong, and to choose actions that are for the highest good,” Silverman assures.

Here then, for your viewing and philosophizing pleasure, are eight of the better examples of Christmas crime movies, starting with a little-seen gem that is as funny as it is heart-warming.

Larceny, Inc. (1942) When a pair of low-life ex-cons (Edward G. Robinson and Broderick Crawford) buy a failing luggage store next to a bank—they get it cheap, since its owner is going bankrupt—their real goal is to tunnel into the adjoining vault, a several-months effort that will culminate in a huge score on Christmas Eve. Much to their surprise, however, the would-be robbers discover they have a knack for the retail trade, and their store starts raking in the dough, making the bank heist seem much less attractive. Edward G. Robinson plays wildly against type, spending the last 20 minutes of the film dressed as Santa. It’s a hoot.

Christmas Holiday (1944) Based on a novel by W. Somerset Maugham, this noirish potboiler follows a heartbroken GI (Dean Harens) as he searches for love in the Big City while home from the war, falling in with a femme fatale lounge singer (Deanna Durbin) who involves the poor guy in her ho-ho-hopeless attempt to escape her rich, murderous schemer of a husband (Gene Kelly!). The Oscar-nominated score makes great, atmospheric use of Christmas classics.

We’re No Angels (1955) Humphrey Bogart, Peter Ustinov and Aldo Ray are hardened criminals who escape from prison on Devil’s Island on Christmas Eve (of course), but must hide out with a kindly shopkeeper and his family while waiting to catch a boat off the island. Eventually, they employ their murderous skills—and a poisonous snake named Adolph—in saving the family from the wretched store’s owner and his nasty nephew. There’s a stiffening corpse hanging around for half the movie, but believe it or not, it’s really sweet.

Fitzwilly (1967) Dick Van Dyke is the dedicated head butler of a sprawling New York estate, whose sweet, doddering owner doesn’t know that she’s actually flat broke or that her head butler has turned the house staff into a gang of pickpockets, con artists and thieves to keep her from running out of money. The whole thing culminates in a Christmas Eve plot to rob Macy’s department store. It’s a perfect blend of low humor and high spirits, and Van Dyke is perfect; because he’s known for being so nice, it’s a kick to watch him being so bad.

Die Hard (1988) On Christmas Eve, in the middle of a drunken corporate Christmas party, a New York cop with marriage problems (Bruce Willis) finds himself shoeless and shirtless when terrorists (led by Alan Rickman) take control of the high-rise office complex where his wife works, and where he was washing up in the bathroom. It’s one man unarmed against a bunch of guys with guns, and one long O Holy Night as the bodies pile up and Bruce fights to save Christmas.

The Long Kiss Goodnight (1996) During a small-town Christmas parade, a run-of-the-mill suburban housewife (Geena Davis) suddenly has a revelation: she’s actually a trained assassin suffering from amnesia! Unfortunately, the parade’s public exposure blows her cover, and she is forced to relearn a few killing games to save her daughter. It’s knives, blowtorches, bombs and tinsel as that silent night gets really, really rowdy.

Reindeer Games (2000) Ben Affleck is a paroled car thief who assumes the identity of his dead cell mate so he can hook up with the dead guy’s beautiful pen pal (Charlize Theron), but then the pen pal’s brother turns out to be a psychotic criminal (Gary Sinise) who forces Ben to help him rob an Indian casino—on Christmas Eve, natch. Nothing says Merry Christmas like gun-wielding guys in Santa suits.

Bad Santa (2003) The curdled cream of the crop, Bad Santa features Billy Bob Thornton as an alcoholic scumbag burglar with a fascinating MO—he gets jobs playing Santa in shopping malls, and then robs the place on Christmas Eve. By the climax, he is redeemed—sort of—by the love of a kid. Not that he will ever be a good Santa.

“In the end,” Silverman says, “all of these movies are really about ethics. At the deepest level of any spiritual practice or philosophy, there’s that struggle to engage in the better parts of being a human. That’s why we watch holiday films—to remind ourselves of the goodness that we can all aspire to.

“Though sometimes,” she adds with a laugh, “the filmmakers are probably counting on that fact that, for some people, it’s just fun to watch people do bad things—and doing bad things at Christmas is somehow extra juicy, as long as it stays on the screen.”