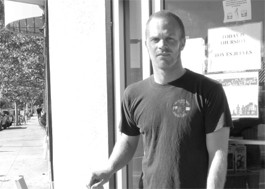 Photograph by Felipe Buitrago
Making a point: Patrick Stonehouse hopes that state money can help groups like his care for injection-drug users.

Patrick Stonehenge spends the better part of his day waiting for drug addicts. They come into his workplace, the Drop-in Center on Front Street in Santa Cruz, hand him a collection of drug-tainted, sometimes HIV- or hepatitis C–infected needles, and in return he smiles and hands back an equal number of fresh, clean needles.

Most of the time this is just the beginning of the interaction. The client might look through the donated clothing, take a breather on the cushy couch, grab some clean cookers and alcohol swabs or just stay to talk with Stonehouse and the other volunteers at the center. Sometimes the talk will turn to drug addiction, but often the client is just happy to hear a friendly voice.

Up until a month ago, Stonehouse was completely reliant upon donations from local community members and private foundations to fund the center that he directs. But then came a surprise. In a precedent-setting move, on June 1, the California Office of AIDS supplied $75,000 per year for three years to 10 California programs. In the North Bay, the money was awarded to the Drug Abuse Alternatives Center; in the South Bay, to Stonehouse’s needle-exchange program. This marks the first time such programs have received government money. The total amount handed out by the Office of AIDS was $2.25 million, all of which came out of the general fund and could have been used for other programs if government staff had so chosen.

Not long ago, this would have been unthinkable. The last decade has witnessed a slow but steady shifting of perceptions on needle-exchange programs in the political sphere. Once considered by many politicians an enabler of dangerous drug use, needle-exchange programs are now gaining acceptance as a legitimate public-health measure in even the most conservative corners of the nation.

In California, the programs, part of a larger harm-reduction movement that advocates less focus on punishment for drug users, have gained important legitimacy in the lower echelons of state government. While $75,000 a year may seem like small potatoes, needle-exchange advocates say the symbolism of a California Department of Health Services office throwing its support behind historically illegal programs is enormous.

Kevin Farrell from the Office of AIDS helped analyze the grant proposals and says his office had to turn away more programs than it could fund. “I think the fact that we had 10 successful candidates but 18 unsuccessful candidates speaks to the pent-up demand for this in the state,” Farrell says. “Many of those programs could have been funded. They were very tightly bunched; the quality of the applications was very, very high, and it was tough making those choices.”

The only hurdle remaining is a ban on using state money to purchase the needles themselves. The current monies can be spent by needle exchanges on staff, rent, nonsyringe supplies–anything else except syringes.

But that could change before the year is out. Assembly Bill 110 would free up state money to be used on the purchase of syringes, something that is also illegal on the federal level. The bill has passed the Assembly and the Senate Health Committee and will be heard by the Senate Appropriations Committee after the summer recess in August.

Gov. Schwarzenegger has rejected previous versions of the bill twice already but refuses to take a position on the current bill until he reads the final copy.

Stonehouse and other harm-reduction advocates believe the establishment of needle exchange programs as a legitimate, proven method of reducing HIV and hepatitis C transmission could help accelerate changes on the national stage.

“I think, as with what happened on the county level in California, one moves another in a hierarchical system,” says Stonehouse. “In California, you had ‘This county said yes, and this county said yes, but the state still says no.’ So we’re getting to the point where we’re having more and more states say yes, but the federal government still says no. The idea is that you get enough of the constituents to say yes, and then it’s going to effect the grand change.”

It’s already starting. In May, New Jersey authorized cities to set up and operate needle-exchange programs, and Washington, D.C. may relax its longtime ban on public money for exchange programs.

Even the Texas House of Representatives held a public hearing on implementing a pilot needle-exchange program, and not a single public comment from the Republican-controlled district was lodged against the idea. The House swiftly approved the bill in late May.

While there are still a number of needle-exchange programs across the country struggling to scrape together sufficient funding and forced by law enforcement to operate in the shadows, those days may be numbered as the myths that surround injection drug use fade away.

“I’d like to think the stigma is falling away as people get more educated and knowledgeable about addiction,” says Hilary McQuie of the Harm Reduction Coalition’s Oakland office. “It involves the efforts of a lot of people to shift that public perception.”