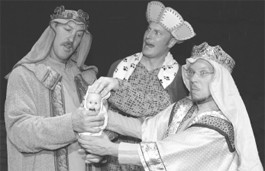 This queasy little factoid, that “you fart when you die,” succinctly explains why actor Jarion Monroe, playing the demises of various Shakespeare characters over the course of The Complete Works of William Shakespeare (abridged), always chooses to shuffle off his moral coil amid an exuberant fanfare of flatulence. Director Robert Currier has managed to inject a steaming pile of hilarious new sight gags, fresh spins and pop-culture references into this opening production of the Marin Shakespeare Festival’s 2007 season.

In this oft-performed show, the flatulent death scenes are a notable part, causing fellow actors Darren Bridgett and Ryan Schmidt to break character mid-Hamlet and demand an explanation for all the deathly colon-tooting that takes place every time Monroe kicks the bucket. As you might expect, the sight of poor wretched Claudius, newly stabbed by his stepson, farting his way into the afterlife is as funny as it is crass.

That pretty much sums up the show, and this production in particular. Always a hit, Complete Works benefits from director Currier, who has obviously stewed up a lot of ideas since the last time the show was performed under the “brave overhanging firmament” at the Forest Meadows Amphitheatre stage at San Rafael’s Dominican University. It is hard to believe that anyone can be unfamiliar with the “plot” of Complete Works, given how frequently Jess Borgeson, Adam Long and Daniel Singer’s show is performed by small, energetic companies around the world (including the Reduced Shakespeare Company, the still-traveling troupe that originated the show as a sketch at Novato’s now-extinct Renaissance Pleasure Faire).

For the unfamiliar few, however, let it be said that in the Complete Works, three grandiose actors attempt to perform all 37 of Shakespeare’s plays in a single evening–and make a comical mush of the whole mess. Titus Andronicus is a very bloody cooking show; the comedies are condensed into a single multi-tangled story; the histories are sprinted through in the form of a crown-passing football game; and Hamlet is done four times: fast, faster, fastest–and backward.

Jarion Monroe–confidently ridiculous and armed with a first-rate George Bush impression that pops up from time to time–is joined by the always appealing Darren Bridgett, who this time out offers a penchant for flinging fake organs and eyeballs into the crowd and blowing artificial vomit (OK, it’s only confetti) into the audience every time one of his own characters is preparing to expire, and a flexible Ryan Schmidt, whose own thespianic quirks include dying with his feet in the air, freezing up at all the wrong moments and calling for lines in the middle of famous soliloquies (“To be or . . . line!“).

Such tomfoolery is the naughty norm in these shows, and there are several of them now in the canon, including The Bible: The Complete Word of God (abridged), currently being staged by the Sebastopol Shakespeare Festival. What is so unique about these plays is that the actors performing them are encouraged to add their own off-the-cuff, offbeat and even off-putting ideas. Under Currier’s Monty Python-inspired direction, these ideas often run to the raunchy side of things. Let it be known that this may be the most off-color production of Complete Works ever staged in these parts. It may also be the funniest.

Much of the proceedings are nothing but silliness. After the guards in Hamlet end their night-shift with the famous declaration “Break we our watch up,” they immediately break their wristwatches. Bridgett, confused about the meaning of the word “Moor,” begins his characterization of Othello as the piratical Jack Sparrow (moors are where pirates dock their ships, right?). When Schmidt, as Romeo, says to Bridgett, as Juliet, “Call me but love–,” Bridgett breaks character to respond, “Did you say to call you Butt Love?” and that name sticks for the rest of Romeo and Juliet.

Yep, it’s that kind of show. And it’s hilarious.

Currier loads on the pop-culture references, Airplane!-style, hitting everything from Harry Potter and The Sopranos to Rocky, Paris Hilton and Lindsay Lohan. But what makes or breaks this show is the commitment and skill of the actors, who must appear to be making everything up as they go while performing exhausting feats of physical endurance and comic timing. This cast, first-rate in every way, occasionally push the boundaries of taste and decorum (I can’t begin to describe what they do with a stuffed beaver), but if low-brow homage to high-brow theater is your cup of Lipton, this is the show for you.

Imagine that same comic sensibility applied to the Bible, and you may get a teeny idea what to expect from Sebastopol Shakespeare Festival’s The Bible: The Complete Word of God (abridged), directed by Jennifer King. The show, written by Reed Martin, Austin Tichenor and original RSC member Adam Long, does to the Old and New testaments what the Shakespeare show does to the Bard. Is it offensive? Only if you want it to be.

Looser, rougher and a bit less jam-packed than the Marin show, the production suffers slightly from volume issues whenever there are amplified voiceovers from backstage, but is otherwise effectively rambunctious and fast-paced, and makes use of nearly every bad Bible joke you’ve ever heard.

Throughout the show, we learn several important things, such as that “Go to” is the Biblical way of saying “up yours”; that God has a multiple-personality problem; and that when Jesus fed a multitude with bread and fishes, he used cheddar-flavored goldfish crackers. It’s funny, irreverent, silly and playfully profane, and even if nobody farts when they die, it makes for an evening pleasantly philosophical irreverence.