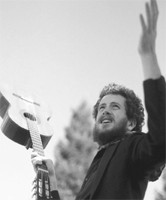 Down Past the Roots

Photograph by John Blackwell
Catching air: John Palmer plays with the supernatural on ‘Murder of Crows.’

If there were any justice in the world, John Courage would be out on tour with Neil Young, and their new album, Murder of Crows, would be added to every Americana playlist across the country. It’s that good.

Ask 23-year-old John Courage frontman and alter ego John Palmer about his music’s place in the larger scope, and he humbly stabs at the basics. “I guess ‘folk-rock’ is a broad, horrible, generic term for it,” he says, sitting on a bench in Santa Rosa’s Courthouse Square on a recent Wednesday evening, choosing only two of about 13 different circles from his album’s stylistic Venn diagram. I suppose reaching closer to the point would involve a term too long to bother saying, something like Renaissance-folk-carnival-shanty-gypsy-bluegrass-psyche-baroque-honky-tonk-blues-garage-country-rock.

That’s a lot of cooks in one kitchen, sure, but the hodgepodge works amazingly well. The reason the album towers above the rest of the sounds-the-same twang so often slung as “roots music” is because, rather than stewing all that has come before it into a palatable, unchallenging placebo, Murder of Crows builds instead on those traditional forms with chilling atmosphere, magnetic story line and captivating instrumentation. Additionally, it’s propelled by Palmer’s rough-hewn natural rasp, developed over years of nearly constant performing.

As a teenager in the late ’90s, Palmer played in a Christian ska band called Gone Fishin’, an outfit that I once witnessed but have never heard him mention. Thankfully, when the band John Courage began in 2001 as an incredibly ambitious collective with three guitarists, two tambourine players, a rhythm section, a backup vocalist and a violinist, little, if any, traces of Christian ska remained. It was an epic, if unrefined, start out of the gate for John Courage.

“The aspirations were huge, but I don’t think we were there,” Palmer recalls. “Everybody’s egos were way too big; everybody wanted to be on the front of the stage. When you’re 18 and 19, you don’t know how to step back and let somebody else take the spotlight.”

Once members started leaving the group, Palmer scaled the band down to a three-piece with acoustic guitar, upright bass and fiddle. “But it wasn’t bluegrass,” he stresses. “It was more like rowdy old folk music.”

Around this time, I ran into Palmer after he’d had what seemed like a life-changing experience. While walking through an abandoned parking lot near his house in downtown Santa Rosa in the dead of night, both he and a friend felt a rush of horrifying energy surround, and then pass through, their bodies. (Also, at the time he says his house was inhabited by supernatural beings: “I don’t know if I’d call it ghosts or spirits or energies, but definitely supernatural kind of stuff.”) I noticed a change in Palmer afterward, a sense of humility, perhaps–possibly compounded by the departure of his fiddler and girlfriend, Odessa Jorgensen.

This all translated into heavier situational imagery for Palmer’s new songs, while a quiet respect for the unknown made its way into his voice. (On fingerpicked numbers, he can be as breathlike as M. Ward; for the lower register, he resonates like the Black Keys’ Dan Auerbach.) It also meant that Palmer needed to wrangle up another band, and he wrangled well.

Jessica Schaeffer, Muir Houghton, Leila-Anne Brusseau, Emily Jane White, Ephriam Nagler and J. D. Schrieber–all deft practitioners of their craft–make up Murder of Crows backing band, the Apparitions. With the brilliantly unconventional ensemble of concert harp, accordion, cello, violin, junkyard percussion and musical saw, they handle Palmer’s material with requisite care and give Murder of Crows a sleek, otherworldly ambiance. Just before recording, Palmer finished writing the album inside a notoriously haunted house during a getaway on the Mendocino Coast, a perfect intertwining of his musical sense and his belief in the supernatural.

“They both kind of inhabit the same part of my brain,” he reckons. “It’s that same sort of mysticism. Music’s still very mystical to me, because it just comes and goes. It’s just like a very old, familiar sense tingling in your neck.”

Much of Murder of Crows succeeds with the character study; the title track, for example, concerns the brutal killing of a child molester. “I sort of fantasize my own experiences and whip ’em up into something much bigger than they ever were,” Palmer explains. “People hear songs that I said I wrote about them, and they’re like, ‘What are you talking about, man, that shit never happened!’ That’s the beauty of it, you know. I write songs, I spin stories.”

This casual attitude spills over into the inner workings of John Courage. Palmer has played countless theaters, festivals and backyard parties, estimating that he’s written over a hundred songs, but after six years, Murder of Crows is the band’s first official album. (A few handmade CD-R releases precede it.) The unofficial lineup of the band has evolved into a revolving door of the area’s best musicians; these days, even Palmer himself isn’t sure which band members will come to scheduled events.

“It’s sort of like when you’re in a relationship with somebody, but both of you have relationship-phobia,” he explains. “You’re just like, ‘I’m seeing somebody.’ We don’t call it a band, it’s like, ‘We hang out, we’re jamming,’ and sometimes,” he laughs, “they show up to shows.”

Later that night, Palmer gets lucky when the only member who shows up is guitar virtuoso Henry Nagle, bringing the house down with his masterful, complementary fretwork on an original revival-style response to Palmer’s Baptist upbringing called “Will You Be at the Pearly Gates.”

“It might be too late for a kid like me,” Palmer whoops, “who’s got ramblin’ in his soul.” Palmer, who once hitchhiked all the way to Canada and back, is planning to move to Washington in the next few months, and as the song comes to a close, the lines resonate with extra meaning.

“But,” Palmer assures, motioning to the city around him as the sun starts to go down on Courthouse Square, “I’ll always be tied into Santa Rosa. I just need to go out and turn the next chapter in my life.”