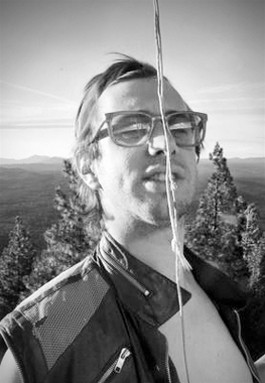 W ith his shaggy hair and white-rimmed glasses, Chris Peck seems just another indie rock kid subscribing to the Weezer school of geek chic. Upon meeting him, it’s hard to believe he’s Peck the Town Crier, the local musician whose innovative hip-hop, jazz and funk fusion invades Bedrock Records on March 30 and Sweetwater Station on April 16. But when Peck opens his mouth, his enthusiastic and unpretentious mix of California and b-boy colloquialisms leaveno doubt of his artistic eccentricities. “I’m not really efficient at, like, spreading the word or marketing myself,” he tells me, sipping his java, “but I am a mystical soldier of writing new shit.”

As he speaks, I can’t stop hearing his song “Coffee,” where rhymes and plastic-soul croons are buoyed by a marching band drumbeat. “It turns my world around / Keeps me from sinking down / It turns from black to brown / You add a little cream / It’s a whole new scene.” While this tongue-in-cheek offering may recall Beck or Har Mar Superstar, Peck is less schticky and more organic. On his new album, Groundhog’s Day , he brings a sincere, scholarly reverence to every style explored, from the be-bop of “Jump for Joy” and the soulful p-funk of “Underwear,” to the honky-tonk of “The Widow and the Wasp” and cheerleader stomp of “Shout!”

“I call it hist-hop,” he says of his music, “because we’re pulling from all kinds of roots of weird old American music.” His lyrics are just as eclectic, combining refreshingly positive affirmations with quaint stories. “Some songs are colorful little jokes that happen through hangin’,” he says. “The fabric of ‘the hang’ ends up in my raps.”

Peck the Town Crier is a phenomenon that could only have come from Marin, and it began with Peck learning guitar at the Saint Mark’s School’s fertile music curriculum, which was rife with rock-star parents. “I remember the drummer from Journey, Steve Smith, played with us in fifth grade,” he says. “It was a face-melting experience.” By the time he graduated from the Branson School, he’d already completed Your Tape Machine’s Not Broken, recorded on a four-track reel-to-reel.

Through school shows and sitting in at the short-lived San Rafael club Jazzed, Peck became hooked on performing. “It was a way to shine and have an alter ego,” he says. His current brand of eccentric theatricality features tear-away trousers and even a wall of clapping hands. “It was somewhat of a disaster onstage,” he admits with a laugh, “but a charming disaster.”

As a student at NYU, he was part of the jazz department, but a bout of severe tendonitis made him unable to play any instruments at all for weeks at a time. It proved serendipitous in the end. “I used to make my guitar sound good, and everything else was an afterthought,” he says. “But when I couldn’t play, I started turning into more of a composer, playing with all these musical Lego’s instead of playing just one.”

Nevertheless, California was calling him back, especially after one spring back home. “I met energy healers and people who grew weed and people who were into weird local music that I couldn’t have heard in NewYork,” he says, still sounding excited. “I got more music written here than I had in years. I went back to New York and said, ‘As soonas I graduate, I’m moving back, and it’s gonna be, like, on !'”

And it has been “on” ever since, with endless projects like “Le Chronique,” an upcoming concert series in San Francisco that will utilize his improvisational jazz training to blend looping with live instrumentation. “I need to stay connected to the old ways, not something that is trumped up by the machine,” Peck says. “I need to be part of the continuum of the really raging, aesthetically sharp shit.”