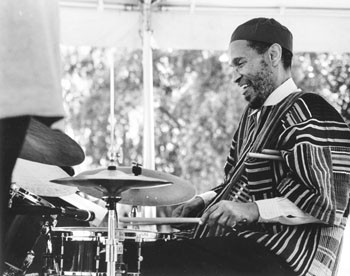 THE MOST recorded jazz drummer of all time–that’s how the history books will remember the legendary Billy Higgins. But friends and colleagues of Higgins–who died May 3 of liver failure after a lengthy illness–recall in glowing terms a very special musician who was regarded as a bodhisattva.

“Billy was a Christ-like figure,” says celebrated jazz drummer Billy Hart. “I mean, that might sound extreme, but he was more than a mere mortal.”

Indeed, onstage Higgins displayed an almost childlike exuberance when he got behind a drum kit, smiling broadly and glowing with a visible radiance.

Percussionist and drummer Steve Barrios remembers Higgins being taken to the stage in a wheelchair during the past year, only to rise above his illness for the duration of his stunning performances. Higgins’ last studio recording, on guitarist John Scofield’s newly released straight-ahead jazz CD Works for Me (Verve), finds Higgins at his most tasteful, pounding out a lengthy solo and mesmerizing with his intricate cymbal work.

In two weeks, Higgins will be the subject of a special Healdsburg Jazz Festival closing-night tribute, featuring several top jazz drummers. Higgins, originally scheduled to perform three times during the May 30-June 3 festival, was a longtime friend of Jessica Felix, the event’s founder and artistic director.

Famadou Don Moye will substitute for Higgins at the opening gala, teaming up with Ray Drummond and Craig Handy. Charles McPherson Jr. son of the great alto sax player, will replace Higgins in his drum seat at the closing-night tribute.

HIGGINS, who died at age 64 while waiting for a third liver transplant, began his career playing in R&B bands behind singers Brook Benton and Sister Rosetta Tharpe. In 1957, he joined the Red Mitchell quartet before beginning a three -year stint with avant-jazz pioneer Ornette Coleman.

He left Coleman to work with John Coltrane, Sonny Rollins, and Thelonious Monk. In the mid-’60s, Higgins became a highly sought-after session player, recording with Herbie Hancock, Hank Mobley, Dexter Gordon, and Lee Morgan (including the original recordings of “The Sidewinder” and “Watermelon Man”).

Felix first met Higgins in 1974 at the Lighthouse jazz club in Los Angeles. At the time, Felix’s boyfriend was a jazz drummer who had worked with the legendary percussionist. Over the years, Felix and Higgins became close friends. Higgins agreed to perform at the fledgling jazz festival during the first and second years. Knowing that Higgins had advanced liver disease, Felix decided to dedicate this year’s festival to her old friend.

“I knew his time was getting short here on earth,” she says. “I thought it would be great to bring his friends here and do something special, though I really wanted to do it for him while he was alive.

“He was always the person who was there for everyone else.”

Last year, Felix landed a grant from the California Arts Council to bring Higgins back to the festival, and she built three of the festival’s programs around him. While Higgins will be missed, Felix says, his influence will continue to be felt at the festival–Higgins, who operated the World Stage cultural arts center in Los Angeles, had a lifelong commitment to youth education programs and passed that passion along to Felix.

“I’ll miss his presence. His touch was light–we were like partners,” Felix says. “We worked together on our ideas and dreams, and whenever he was in town, he went into the local schools and taught. He got me more focused on education than I ever would have been.

The third annual Healdsburg Jazz Festival, an ambitious alternative to the glut of smooth jazz flooding wine country stages, runs May 30-June 3. It kicks off Wednesday, May 30, at 6 p.m., with a gala dinner and concert by the Billy Higgins Trio, featuring drummer Charles McPherson Jr. at the Trentadue Winery. $125.

The festival continues Thursday, May 31, at 7 p.m., at the Raven Film Center with a much-anticipated Jazz Night at the Movies program with film archivist Mark Cantor, a highlight of past festivals. $10.

The Pete Escovedo Orchestra, and Jerry Gonzalez and the Fort Apache Band, bring a Latin flavor to the mix Saturday, June 2, at 1 p.m., at an outdoor concert held at Rodney Strong Vineyards. $25.

The Ray Drummond Quartet (with Craig Handy, Rob Schneiderman, and Billy Hart) performs Saturday, June 2, at 8 p.m. at the Raven Film Center, along with the world premiere of a Lester Bowie film collage, featuring a performance by Famodou Don Moye, Amina Claudine Myers, and Arthur Blythe. $25.

The Heath Brothers–Jimmy, Percy, and Tootie–plus the Billy Higgins Sextet, with Harold Land, Oscar Brashear, and George Bohanon, will perform prior to a salute to Billy Higgins featuring drummers Billy Hart, Famadou Don Moye, and others outdoors at Geyser Peak Winery. $25.