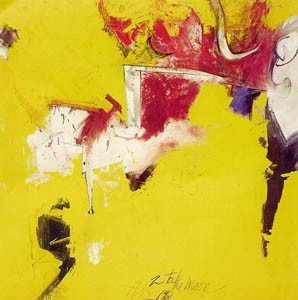 Two exhibits to thrill and delight

My paintings are intended to be additions to rather than reflections upon ‘life,'” the artist Hassel Smith wrote in 1952. And indeed, a good, long look at the muscular and joyful works on display at the Sonoma County Museum remains a definite addition. Intended as a mini retrospective and titled “Hassel Smith: 55 Years of Painting,” this exhibit, showing through Jan. 26, also focuses in great part on the years 1953 to 1959 that Smith spent living and painting in Sebastopol. Now 87, Smith resides in England, but while he was in the Bay Area, he and such colleagues as Clyfford Still and Richard Diebenkorn helped to change painting forever.

Seemingly as fresh and lively today as when they were painted, the pieces in “55 Years” fill all three exhibition spaces of the museum with stages and periods of Smith’s oeuvre, from the oversized abstracts of his years at the California School of Fine Arts (now the San Francisco Art Institute), to the drawings he rendered as a young socialist working for the New Deal, to his pop-art phase–even allowing a rare look into more current work such as the return to abstraction heralded with Nil by Mouth (1997).

To represent or not represent seems to be the question, one that Smith hassled with throughout much of his career, his canvases veering from the nonobjective to the figurative to the nonobjective with figurative elements. Culled from collections around the nation, most notably John Natsoulas’ gallery archive in Davis, this is an uneven show. Superbly moving works are hung alongside pure head scratchers (and yes I mean the odd pin-up juvenilia of Leda and the Swan). But perhaps that too is consistent with the painting labor of 55 years; no one hits it out of the park every time.

The main gallery on the bottom floor is the chief attraction of this exhibit, the canvases literally pulsing with paint and movement and color, and a real masculine juice. Now, journalists aren’t supposed to admit that they get their ideas from publicists, but SCM publicist Ariege Arseguel nonetheless put it best.

“Do you remember the old San Francisco Museum of Modern Art?” Arseguel asked. I nodded. “Remember how it was downstairs off of Van Ness and was sort of dark, with that great modern art on the walls?” More nodding. “This,” she said, sweeping her arm to the Smith-filled room, “reminds me exactly of that.”

Me too. Just as one stooped downstairs to visit the old SFMOMA, coming off the glare of the street into a mostly testosterone-fueled underworld of free thought, here one climbs up from the glare of the street to the wooded excesses of the SCM to discover an upper world of testosterone-fueled free thought. There remains an excitement to Smith’s paintings that is reminiscent of the near-illicit pleasure of peeking into the vigorous modern work that the SFMOMA used to house in a basement, one that is enduringly lovely to behold.

Perhaps most exciting of all, this is exactly the kind of exhibit that the SFMOMA might mount, basement or not, and with nary a bridge to cross.

SSU’s Voice of the Trees

This column might more appropriately be titled the “Six Degrees of Schwager,” as Sonoma State University art professor Michael Schwager both sits on the board of the SCM and is the director of the University Art Gallery, now showing “Wood: Six Artists/One Medium” through Dec. 15. Whatever his contribution to the Smith exhibit, he is to be lauded for continuing to bring the routinely splendid to his own gallery.

Perhaps the first sense to be awakened in the gallery’s airy space is that of smell. Fresh, fragrant tree sap defines the air, while the many uses of timber are staggeringly delineated in the rooms. Swiftly second in sensual perception is Jeff King’s reappropriation of trees, sliced as thinly as wooden prosciutto and then reformed into a massive x, the full hollow of a fallen tree (Empty Log) or a giant’s tire swing (Erso). The late Alvin Light has rough-cut his wood (Untitled), in some places lusciously impastoed with paint, into an upward yearn that bespeaks a trumpet’s long be-bop wail. His one contribution leaves a taste for more.

The late Dennis Leon built rocklike structures that tower far above the viewer, are layered with plywood, and are burned and scratched and painted and nailed up with their own organic force. Such a work as Rockface has the power of a slab of Richard Serra’s steel, is just as uncanny in its ability to stand upright, and appears to literally undulate or breathe when one comes close.

Bernie Lubell and Kyoung Ae Cho round out the exhibition, Lubell offering several conceptual contraptions and Cho rethinking wood’s process from forest floor to humanity’s mundane use. She tracks her small wood squares from cut down to sewn up in three panels of silk organza (Inner Scapes), finally just nailing a representation of a tree’s heart to the wall (Grid).