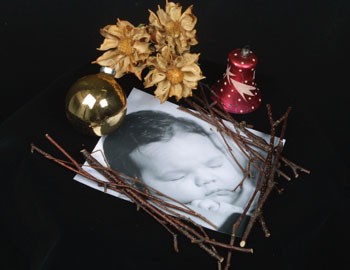 The limbs of my family tree bend to splintering under the weight of old tubes of half-used acrylics, dusty typewriters, barely scuffed dancing shoes, and neglected Mozart scores. We of my genetic wood all like to think of ourselves as artists, reputations self-built without regard to the hard facts of slim publication, egregious still lifes, left feet, and a few traumatized piano chords.

Therefore, when the rough circumstances of a poverty-stricken young motherhood slapped down upon me for several consecutive jolly winter seasons, I delusionally chose to make my own holiday gifts.

Since I have no proven talents that don’t include typing, this was dicey stuff. But I had learned to sew when I was eight and had knitted well into my 11th year. What, I reasonably considered, could be so hard about creating a few lovely handmade gifts to delight friends and family alike?

While “slap” and “dash” are two words that certainly married in the minds of my honored giftees, these labors were not quick, easy, or particularly inexpensive to craft.

I might maintain in court–and being family, we were able to settle out of court in several instances–that my intent was not to sicken or injure my best beloveds. It just kind of continued to turn out that way.

This being a community service of sorts, I offer several homemade gift ideas and tips on how not to do them.

We all know that dried flowers are a thoughtful decorative touch. When considering the simple nosegay as a permanent present, however, do not make the ordinary mistake of composing it solely of thistles wrested from the roadside. I imagined them, glistening under a light spray of paint and tied with a ribbon, as the kind of touch that screams, “I Love You in a Tasteful Way” at all passersby. I was wrong. While my grandmother eventually healed, the scars in her palms remain a stigmata of testament to this misguided effort. I share this heavy lesson: At the very least, do not wrap your roadside nosegay–let your happy recipients know what’s coming before they firmly grasp it.

Wood I, Could I

It’s a simple holiday fact: When whacked on eggnog, relatives have a tendency to clamor madly for baby photos. I determined to cut a clever two-birds-with-one-stone swathe by making my own picture frames, complete with infant mug shots. That I unfortunately tried to fashion these frames entirely out of twigs was not even original. I read about it in one of those crafty women’s magazines that litter the grocery checkout. “Easy Gifts You Can Make at Home!” taunted the headline. Below it read the evil instructions for simply gathering twigs from one’s own lawn and tying them together with decorative twine.

How difficult could that be, I shrugged.

Answer: Plenty. It was like being damned to a geometry lesson in the madhouse of the soul as I composed slippery, foldable diamonds of twigs, irregularly shaped triangles of twigs, twitching parallelograms of twigs, and, finally, a large symmetrical pile of twigs that flickered nicely in the fireplace.

Having failed logic and having never been any good at math, I had precut the children’s photos to fit the foldable diamonds. Those butchered prints appeared anonymously under the tree, tucked into a plain white envelope. One aunt still mentions that mystery in a wondering voice each year. She is my favorite aunt.

If you’re like Martha and me, you buy extra pumpkins at Halloween in order to gracefully decorate your Thanksgiving festivities. If you’re even more like Ms. Stewart and me, you think that spray-painting these glorious globes adds a certain sophisticated yet earthy splash to the traditional crèche. However, if you’re only like me, you go even further and imagine that others might wish to share in this three-month-old vegetable experiment.

And so it was that one chilly day I rolled my old pumpkins out into the driveway without fully examining them and spray-painted them silver and gold with a steely determination to give joy to others. Perhaps you are unaware of the smell of a seeping, rotting squash as it weeps through a layer of cheap, silver spray paint. Perhaps you should consider yourself very lucky not to have been my sister the Christmas of ’94.

‘B’ Is for Botulism

Everyone loves the groaning board at the holidays, but we’re all pretty well agreed that the groaning should remain strictly metaphorical. Unhappily, stomachy noises have sometimes been heard after receiving one of my thoughtful homemade kitchen gifts. Several instances spring merrily to mind.

There was the Kahlua distilled with cheap generic vodka that must have come from some grocery store’s bathtub. While no one was blinded, none of us order liqueur after dinner anymore or utter the word “Mexico” in family company.

There were the flavored olive oils that I steeped for months in garlic and rosemary from my very own garden. In retrospect, I might agree that first washing the rosemary would have been a sage notion. I additionally might concur that thoroughly sterilizing the bottles would have reserved some emergency room time for others in need.

Indeed, from the sorry wastes of my kitchen have issued many, many failed gifts: There were the cranberry breads that I was too impatient to fully cook, thus achieving an unusual holiday color composition as an uncanny green spread to join the red of the berries; the dough ornaments that received a similar baked impatience plus some slapped-on dashes of paint, only to sog off the tree Christmas morning in damp thuds; and the cookies in which dribs of imitation rum, lemon, and almond flavoring desperately replaced the vanilla, resulting in holiday treats tasting like crumby abstract paintings.

I have now laboriously clambered back into the teeming circle of the middle class, which allows me to waste large amounts of money each December on perfect gifts made by others, presumably safe to both open and digest.

But I continue to flirt with creative danger, last year’s Christmas tree being a case in point. Hampered by the intimate confines of our teeny cottage, we had no place in which to place the fir.

Ill-advised artistry struck when we rescued the previous year’s tree–as yet unrecycled in an awful heap at the bottom of the garden–sawed off most of its limbs, spray-painted it gold, and hung it from the ceiling. There the hateful thing swayed, whacking us regularly on the heads while the kids moaned on about their unhappy childhoods.

All of this has led to a family tribunal decreeing that, like a paroled graffiti artist, I may never again come within 800 feet of a can of spray paint.

I am additionally barred from stepping foot in the kitchen for that dangerous period of time stretching from Thanksgiving to Boxing Day.

I think we can all live with that.