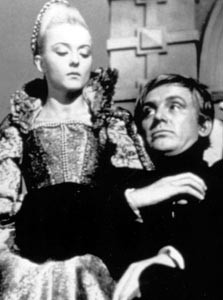 THE VERY notion of a Russian-language version of Shakespeare’s Hamlet, filmed in the Soviet Union in 1964 during the terrible old Cold War days, will surely intimidate certain viewers. Others may be attracted to such an offering out of cultural curiosity, approaching the piece with an eye for cinematic clues about life in Russia during the reign of Khrushchev. And some, Shakespeare fans who’ve already seen every English version of the play, might be eager to score one more big-screen Hamlet notch on their cineaste belts.

Such fears and expectations are natural. But the true pleasure of Grigory Kozintsev’s magnificent Hamlet–screening during the Rafael Film Center’s Soviet Cinema series–lies in seeing the bones of the story laid bare. With Shakespeare, the glorious language often takes precedent over the story itself. But in this case–with English subtitles translated from a “modern language” version by Russian poet-writer Boris Pasternak (Dr. Zhivago)–Shakespeare’s language is dropped to a subordinate role, allowing the tale itself to rule the show. And rule it does.

Few filmed versions of Hamlet have so perfectly captured the relentless doom of Hamlet’s predicament. He’s too terrified to accuse his uncle of murdering the rightful king, yet he’s equally scared not to.

The film was made in a Cold War-era Russia steeped in fear. The dread of nuclear annihilation and the growing sense that each Russian’s every move was being watched reveal themselves in the way Hamlet’s every action is shadowed by spies: Claudius, the court adviser Polonius, Hamlet’s turncoat friends Rosencrantz and Guildenstern, and the faceless guards lurking in every corridor. The prince is a prisoner in his own country, deemed dangerous because he won’t play along.

Kozintsev’s Hamlet opens with a long series of eerie shots, in stark but vibrant black-and-white, that brilliantly set the tone and pace for all that follows. Waves rise and fall at sea. Then more waves, filmed a bit closer, till we finally see the shore: sharp, jagged rocks being pounded by surf, and a shadowy reflection–the imposing Castle of Elsinore–now appearing in the mist-shrouded water below.

The ominous quiet of these images is suddenly shattered by a wide shot of Hamlet (Innokenty Smoktunovsky) riding a horse at frantic full gallop across a barren landscape, then up and through the gates of Elsinore. Slowly the gate is lowered and, with a reverberating click, locks into place.

The prison theme shows up throughout the film. When Hamlet addresses his former love, Ophelia, delivering his self-hating “Get thee to nunnery” speech, he does so from one side of a stairway banister, talking through the wooden supports as if through the iron bars of a jail. Later, Ophelia is shown being locked into a stiff iron corset that looks more like a torture device than a piece of apparel.

Smoktunovsky plays Hamlet with a heartbreaking openness, his overwhelming grief and anger made profoundly clear in his haunted eyes. All the performances, in fact, are magnificent, somehow transcending the muddling effect of the subtitles. The orchestral score, too, by Dimitri Shostakovich, is exceptional, rising and falling from moments of quiet emotion to rousing cacophonies that, like this provocative Hamlet itself, are as moving as they are frightening.