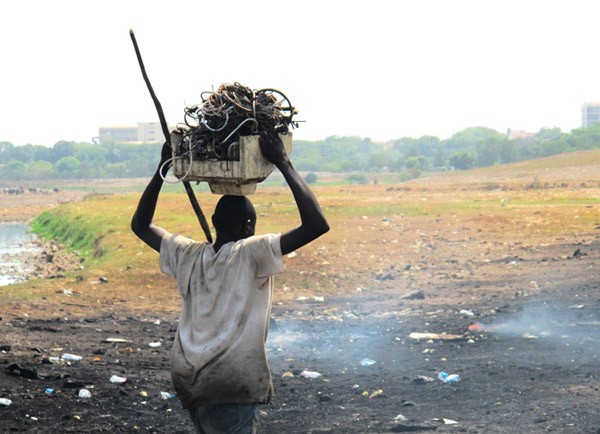 Toxic exports from Afghanistan, Haiti and the U.S.

If toxic-waste dumping strategies were viewed with as much interest as strategies of Super Bowl teams, the public would gather in bars and living rooms to watch a contest in which all countries of the world are teamed up according to performance levels. The global losers—the world’s lowest ranking team—would comprise Afghanistan, Haiti and the United States.

The winning teams are the ones that agree to ban hazardous-waste export to developing countries. Winners of highest ranking are those agreeing to the most strenuous degree of regulations: Belgium, Bulgaria, China, Denmark, France, Germany, Ghana, Luxembourg, the Netherlands, Nigeria, Norway, Slovenia, Spain, Sweden, Switzerland, Trinidad and Tobago, and the United Kingdom. Yay, team!

This game is more than three decades running. In the 1980s, the public outcry against toxic waste dumping in Africa led to the 1989 Basel Convention in Switzerland, at which 178 countries proposed guidelines for how toxic waste could cross borders. In 1995, an additional amendment was proposed to actually ban toxic-waste export—but ratification of that amendment, known as the Basel Ban Amendment, has been tied up for years.

However, at the 10th meeting in October of last year, it was agreed that the Basel Ban Amendment could be ratified by only 68 of the 90 countries that were parties to the 1995 Convention. That means only 17 more countries need to sign on.

Will ours be one of them? “The U.S. signed the original Basel Convention, but never ratified it,” explains Jim Puckett, director of the Basel Ban Action Network. Puckett tells the Bohemian that the United States is the world’s only developed country that has not ratified it. The only other countries that have signed but not ratified the original convention are Haiti and Afghanistan.

The Basel Ban Amendment includes restrictions that “most thought would be in the original treaty but wasn’t because the U.S. didn’t want it there,” says Puckett. “When ratified, the ban will become international law. Unfortunately, it won’t apply to the United States unless we become party to the convention. And part of the reason we’ve never accepted the ban is that the U.S. Chamber of Commerce is against it, as is the trade association for the Institute of Scrap Recycling Industries that is lobbying against the ban.”

In the midst of its reluctance to ratify the convention and the ban amendment, the United States continues to produce the most waste per capita. “It’s a shame and a sham,” says Puckett. “We hope they will join the rest of the world.”

Two bills before Congress (HR 2284 and SB 2070) could change things. In the meantime, Puckett advises keeping old cell phones and computers from becoming toxic exports by using only certified e-recyclers and not “hidden exporters.”