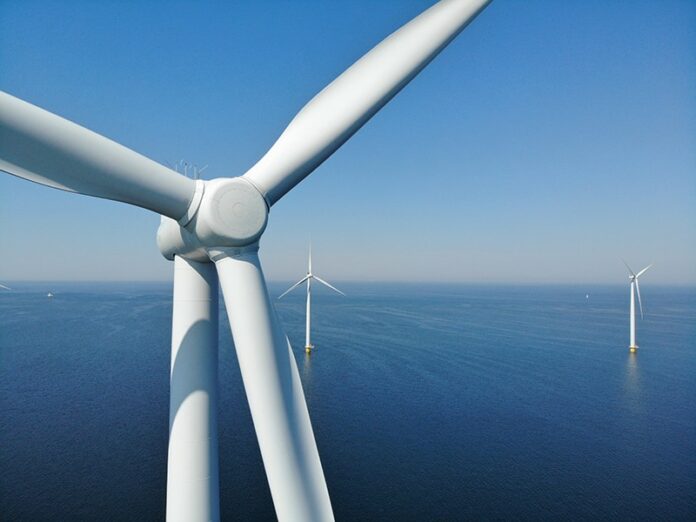 Can offshore windmills save the planet—or at least California—from ruin?

When it comes to global climate change and what to do about it, there’s a meme you hear in California politics that says Jerry Brown was a man of ambition but Gavin Newsom’s a man of action.

It was Gov. Brown, after all, who set California’s highly ambitious 2045 goal for the state to be weaned off of fossil fuels and fully shifted to an all-renewables energy matrix. Now Brown’s gone and it’s upon Newsom’s administration to decide or declare whether the state should get onboard with an ambitious new offshore wind-farm plan released by the Berkeley-based American Jobs Project in February.

“We hope that state policy leaders take a look at this,” says Mary Collins, managing director and co-founder of the American Jobs Project.

The American Jobs Project (AJP) paper endorses two wind farms currently under consideration for development—in Morro Bay and off the Humboldt County coast—and could add some 18,000 jobs to the California mix by 2045. Given California’s deep-water offshore challenges, the AJP proposal would emphasize cutting-edge offshore windmill technology—huge floating windmills with massive, football-field-length fins that would be tethered to the ocean floor. The AJP’s jobs-focused vision also discusses future technologies such as giant wind-catching kites called Makani devices to fully leverage the renewable promise of wind energy, especially on a cloudy day.

That’s all very ambitious, but is it politically feasible?

Newsom has taken an all-of-the-above approach as he entered office pledging to meet the 100 percent goal. As lieutenant governor he chaired the Lands Commission and in a statement online from late 2017 noted that “we must continue diversifying our energy supply—that means increasing our output of solar, wind, geothermal, hydro and ocean-based energy.”

The AJP is a nonprofit think tank founded by former Michigan Gov. Jennifer Granholm that was incubated out of Berkeley and has an office in the Washington, D.C., area. The organization says it’s been engaged in New Green Deal–type work in 24 states over the past five years but that this is its first foray into California climate-change waters.

The AJP California Offshore Wind Project: A Vision for Industry Growth proposal came about because of the 2045 goal set by Brown and pledged to by Newsom on his first day in office—and because the federal Bureau of Ocean Energy Management (BOEM) started the leasing process for offshore wind-farms development as of last year.

As a result of these intersecting forces, says Collins, “We could see a federal lease as early as 2020 in California waters.”

Could being the operative word.

The AJP has dotted the expected i‘s and crossed the mandatory t‘s in its exhaustive wind project blueprint for California energy independence—it has interviewed the fishermen, solicited input from environmental groups, gotten the public-private ball rolling, engaged in discussions with the Department of Defense, and made sure that organized labor has a place at the table.

The AJP vision comes with the promise of thousands of permanent jobs in the renewable and clean-energy industry—and with big-ticket investment interest in the California project from the likes of Google, Shell and Apple. If fully implemented, the AJP says “offshore wind could be utilized to achieve 100 percent carbon-free energy, improve grid reliability, and support over 17,500 California jobs in 2045.”

That’s a ways off. In the shorter term, Collins says there’s work to be done between now and next January, but is optimistic that the various stakeholders and interested parties will see their concerns fully mitigated.

Historically, onshore and offshore wind projects have been fraught with concerns over negative interactions with birds. North Coast U.S. Rep. Jared Huffman has taken an exceedingly dim view of offshore oil platforms but has signaled an openess to offshore wind farms (his district includes Humboldt County).

Huffman notes that the BOEM hasn’t indicated yet whether the lease procurement will be a wide-open bidding process or “whether they could go right to a decision right away with the local energy project.” He’d prefer the latter option and says that while the “devil is in the details” (transmission issues, impacts on fisheries) the Humboldt project—which he’s more familiar with than the Morro plan—is “a site that looks like a spot that could be appropriate. I am for it in concept for sure. We’ve got to find some ways to say ‘yes’ to projects like this—but it also has to be done thoughtfully.” The conditions are very favorable in Humboldt Bay, he notes: “The wind is good, the conditions are good, and the Department of Defense doesn’t need to protect it for military purposes.”

Fishermen have been wary of offshore wind farms because of the potential negative impacts on where they can fish, and for their gear getting torn up in the windmills. Environmentalists, and Donald Trump, have pointed to the deleterious impacts on birds. But there’s been a attitudinal sea change in recent years over offshore wind farms, as the existential issue of massive global catastrophe has trumped concerns about pelicans flying into the windmill fins.

The East Coast has led the way in offshore wind projects domestically, but for many years, commercial fishermen along the Atlantic were among the biggest critics of the development of a wind farm off the coast of Rhode Island and New York. That project came online in 2016 and, irony of ironies, fishermen there are now charging windmill tourists for a boat ride to go check out the aesthetically appealing wind turbines, says Collins.

“People are really intrigued with this,” says Collins. “There’s a fusion of this renewable energy technology with new maritime opportunities. We’ve seen it in Germany—a tourism industry bubbling up.”

California fishermen were at the table as the AJP put together its private-public blueprint for California, she adds, and have been since an intergovernmental task force was created at the beginning of the BOEM wind-farm lease process in 2016. What’s needed moving forward, she says, is data. “We need more data on fisheries, that’s one thing.” Fishermen have given input to the renewables industry on issues such as whale migration patterns, she says.

Land-bound aesthetic concerns won’t be an issue, she adds, given that the turbines will be tethered about 20 miles offshore and out of view—or barely visible—from land. Besides, she says, after the installation of the wind farm off of Rhode Island, a survey of tourists there found that only one in 10 had a problem with the visible windmills.

Collins says the mainline environmental groups—Sierra Club, the National Resources Defense Fund—have submitted comments under the lease proposal that indicates that they’re open to offshore wind farm development. “They are not against it but want it to happen in the right way,” says Collins.

The Sierra Club has applauded offshore wind project developments on the East Coast and says on its website, “Offshore wind is a key part of transitioning our nation off dirty energy sources like coal, and toward our clean energy future.”

Still, there are concerns that these new proposed leases could be a portent for what’s to come. There’s a possibility that wind farms could one day appear in California’s coastal marine sanctuaries, says Paul Michel, superintendent for the Monterey Bay National Marine Sanctuary, which stretches from San Luis Obispo County to Marin County’s Rocky Point, seven miles north of the Golden Gate. Just beyond the sanctuary’s border there are two more, including the Greater Farallones National Marine Sanctuary, which stretches all the way to Point Arena.

Oil drilling is prohibited in the sanctuaries, barring a reversal from the feds, but Michel, who works under the federal National and Oceanic and Atmospheric Administration (NOAA), says that sanctuary officials are working on a permitting process that could potentially allow wind farms in these protected areas.

So what’s in it for Sonoma and Marin counties? Potentially a lot, says Collins, especially given recent events surrounding PG&E.

The AJP proposal notes that offshore wind projects could sync with the emergent and growing community choice aggregation movement, where counties and regions are determining their energy future through a mix of renewables. Offshore wind could be a dynamic addition to the mix. The AJP estimates that there’s enough wind energy blowing offshore to provide California with one and a half times its annual electricity needs. The proposals in Humboldt and Morro Bay aim to harvest 18 kw a year through an array of the floating windmills. In Huffman’s view, ideally, the energy would be created and utilized by the Redwood Coast Energy Authority (the local CCA)—and as Collins notes, could also be procured by the regional CCAs Sonoma Clean Power and Marin Clean Energy, which purchase renewable energy from solar and wind farms that are often many miles down the electric wire from the point of consumption. “There’s way more energy potential than there is demand” in Humboldt County, says Huffman.

The offshore wind farm push from AJP arrives as the state is engaged in multiple legislative efforts and discussions about how to upgrade its electric grid, especially in light of the recent catastrophic wildfires and how they’ve put the finger on the aging grid. The CCAs rely on that same grid to deliver renewable energy to its customers—whether it’s from local geothermal sources, or from massive solar panel farms or distant wind farms.

“One question we have to ask,” says Collins, “especially with the PG&E fallout, is: can the Marin and Sonoma CCAs be early procurers of this and share the costs and benefits of this new technology?”

Speaking personally, Collins notes that the PG&E bankruptcy has raised broader questions about power-grid systems as they relate to wildfire risk. And again, she says, this is where offshore wind can be a win-win.

The argument often made against cross-state power procurement is that it bleeds jobs from California. “But I think the issue is one of fire risk,” says Collins. “Why don’t we instead look at offshore resources closer to home?”