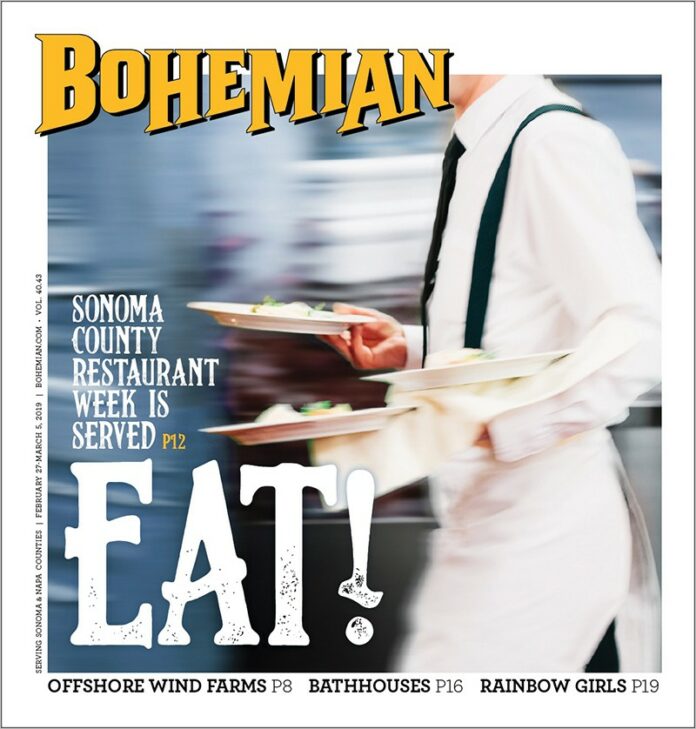 Well, it’s Restaurant Week and that can only mean one thing: stay home and eat some soup! No, no, no—it means get out there and get happy and enjoy yourself at one of the legion of top-notch dining destinations we’re blessed with here in the North Bay. We love participating in this annual civic event devoted to eating. We love eating, we love coffee and we love oysters. We don’t really love this incessant rain outside since it’s keeping us from our Restaurant Week mandate to stuff our fat face in a highly public manner, but don’t let a little atmospheric river keep you from hitting the pavement pounding down some choice North Bay eats this week. But before you do, take a spin through this selection of write-ups from our peerless crew of foodies.

“The soul of the South, coupled with the bounty of our coastline is what inspired the menu at Rocker’s,” says Brandon Guenther, co-owner of Rocker Oysterfeller’s Kitchen + Saloon in Valley Ford.

Guenther revels in serving up local, seasonal and sustainable farmed foods with a Southern-inspired twist. Five styles of Sonoma County’s own barbecued oysters, followed by an heirloom tomato salad and Rosie organic fried chicken, are on the menu, as well as a cornmeal fried oyster po’boy. Are you hungry yet?

Life in Arizona and an interest in hotel and restaurant management led to Guenther’s marriage to Shona Campbell, and also his partnership at Rocker’s, as co-owner of a Mexican restaurant in Placerville and a catering service in Oakland. The two founded Firefly Catering in Oakland in 2003 before they relocated to west Sonoma County. By 2006, they had opened Valley Ford Hotel and Rocker Oysterfeller’s in 2006, housed in a building built in 1864.

Guenther actively consults on new restaurant concepts, designs and operations. His most recent venture was in 2016, to develop a coastal flatbread concept at Gourmet au Bay wine bar in Bodega Bay. In this same year, the couple took over a 40-year-old Mexican Restaurant in downtown Placerville, remodeled the restaurant, crafted a cocktail program, installed a “from scratch” authentic Mexican menu and opened Tortilla Flats Cantina.

It’s obvious there is no shortage of motivation between Brandon and Shona, who plan to tweak the menu at Rocker’s a bit more in the coming months.

The inspiration, says Guenther, is his wife’s heritage. “Shona is from Galveston on the Gulf Coast of Texas. Our menu will begin to focus more on that particular region of the South in the coming months as it shares a lot of similarities food-wise with this part of California.”

Nick Topolos’ earliest memories revolve around food. With a heritage that speaks to Greek and comfort food from the American South, he was influenced by more varied cuisines than would be expected from a suburban boy growing up in Petaluma. In addition to his heritage, he attributes his multicultural culinary background to his mother and a Chinese-American friend of the family. His diversity in cuisine is self-recognized.

“Food has often been part of my most treasured memories, whether it was at the French Laundry or a $2 street taco,” says Topolos. “What they have in common is great food that’s made from the heart.”

Smokin’ Bowls was born from a desire to reinvent the concept of comfort food with a focus on flavor and value. It was built with the intention to provide a space for those with gluten sensitivities to enjoy a variety of quality meals without the anxiety that comes with dining out. This inspiration behind this idea was based on the experiences of his gluten-intolerant business partners.

Located in the heart of Rohnert Park, Smokin’ Bowls showcases menu items such as the Rohnert Pork—slow-cooked, pulled-pork barbecue served on french fries fried in beef fat, covered with house-made cheese sauce and topped with bacon and green onions. Another popular option is the Dragon Bowl, filled with white-meat chicken with hot-sweet Asian sauce over bacon-fried rice. And then there’s the Bowl Named Sue, with white-meat chicken over creamy mashed potatoes covered with country gravy, bacon and green onions. The options for gluten-free diners are fun and seemingly endless.

Says Topolos, “My favorite moments at the restaurant are when people who are celiac come up and genuinely thank us for finally providing them a place where they have a choice.”

The Girl & the Fig

Does it seem like just yesterday that the Girl & the Fig opened up a little space in the little village of Glen Ellen? Maybe not, because it was darn well over two decades back. “We’re going to turn 22 this summer,” says restaurant founder Sondra Bernstein. Those many years ago, Bernstein recalls, she had just left Viansa Winery and Italian Marketplace, and thought it would be nice to open her own little cafe in a 42-seat space in Glen Ellen. “It was just a really fun, funky place, and that started everything.”

Everything includes a catering service, a food truck dubbed the “Fig Rig” and a few ventures that have opened and run their course, in addition to the original restaurant—or “the Fig,” in Bernstein’s fig world—which now occupies a more spacious, choice spot on the Sonoma Plaza, and “the cafe,” in the original digs. Confusing? Not to worry—both locations offer prix fixe dinners for Sonoma County Restaurant Week.

At the Fig Café, where the house style is what Bernstein calls “California home cooking,” $29 gets a diner a first course of roasted beet salad, mache, orange-chèvre crema and toasted pistachios; a second course of roast pork loin, farro, Brussels sprouts and bacon vinaigrette; and a dessert course of chocolate budino, vanilla Chantilly and cinnamon pecans.

“We try to pick out things that tend to be crowd pleasers,” says Bernstein of the menu choices. “They are not totally luxurious, but things that people feel they’re getting a great value for.” But something that diners may not realize is that both figgy eateries offer three course, fixed price options every day at just a few dollars more—it just may take Restaurant Week to overcome diner expectations that they’re really “expensive” wine country restaurants, Bernstein muses.

An even hotter tip on value is the $12 wine pairing. The Fig has a thing for wines from France’s Rhône region, and California wines in those styles—think Viognier, Roussanne for whites, Syrah and Grenache for reds. Get three two-ounce pours of customizable wines for each course, or sample them to then splurge on a bottle. Girl & the Fig’s house brand is another good value for Sonoma Valley Syrah made by their friends at Highway 12 Winery, or Viognier made at Cline.

About that winning name? Sondra Bernstein says it was “name brainstorming with a friend under a fig tree—totally random.”

When I moved to the North Bay in early 2015, my foodie cousins couldn’t stop gushing about Central Market in Petaluma. For the next few years, the pricey menu, along with my general ignorance about fine dining, kept me away. However, when my best friend visited Sonoma County for the first time not too long ago, I knew I had to treat him to a great dinner that featured local ingredients. The plates we sampled that night—wagyu beef skewers, fried shoestring zucchini and a charcuterie plate—were delightful and worth the splurge.

Not only does Central Market offer first-time Sonoma County visitors great flavors, but the restaurant itself says much about our corner of the world. The tasteful décor pays tribute to Petaluma’s agricultural roots. You might find yourself sitting next to a painting of a cow, restored cabinet or egg basket. These additions play into chef Tony Najiola’s vision of serving up amazing dishes in a warm, welcoming, and authentic environment.

During Restaurant Week 2019, Central Market has some fantastic sounding dishes for budget-conscious gourmets. For just $39, diners can indulge in a three-course menu that boasts soup or roasted veggies for the appetizer, fennel sausage or chicken breast for the main, and butterscotch pot de crème or almond macaroons for dessert. Pro tip: have you and your dining partner order opposite courses so you can taste a little bit of everything.

But don’t feel too guilty if you end up spending more than you intended. Central Market has an extensive wine selection, including a whole page dedicated to German Rieslings. Also, you may end up ordering one—or more likely two—baskets of rustic bread straight from the restaurant’s wood-fired stone oven.

In 2001, what inspired Duskie Estes and John Stewart to open Zazu Kitchen & Farm was a commitment to slow cooking, sustainability and “knowing the face that feeds you.” They spread the gospel of responsible and ethical handling and purchasing of meats by sourcing direct from the farmer. The husband-and-wife team are also farmers in their own right, with three locations in Sonoma County where they raise rabbits, ducks, chickens, goats, sheep and pigs. With respect to the animal’s life, they use all parts “snout to tail” and teach their cooks at Zazu to butcher the whole animal.

Duskie has come a long way since she began cooking in her EZ-Bake oven at the age of five. She has proven to be a fierce competitor on the Food Network’s Next Iron Chef (seasons 3 and 5) and has served as a judge on Guy’s Grocery Games; her beloved Zazu Kitchen & Farm was featured on Food Network’s Diners, Drive-Ins & Dives.

John is an avid salumist who studied at the University of Iowa’s meat science program. The couple met in Seattle, both working for Tom Douglas at Palace Kitchen before moving to Sonoma County, leaving behind Duskie’s year-2000 status as City Search’s Seattle Best Chef. During her tenure at Palace Kitchen, Gourmet magazine ranked it one of the top 20 restaurants in the country. No stone was left unturned for Duskie, who also co-authored Tom Douglas’ Seattle Kitchen, which received the James Beard Award in 2001.

As one of the San Francisco Chronicle‘s Top 100 restaurants and San Francisco Magazine‘s Top 50 restaurants, Zazu continues to accumulate accolades. Adding to the list, Zazu has been recommended in the Michelin Guide from 2008 to 2018, and in 2017, Duskie and John were featured on the cover of Wine Spectator in recognition of the restaurant and their Black Piglet food truck.

“We are lucky to be in Sonoma County,” Estes says in regard to life with her husband, children and animals. “We want to represent what is awesome about this place, [especially] its proximity to source.”