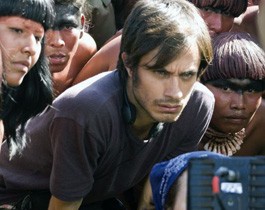 Sonoma County’s resident water drinkers and film lovers can celebrate Earth Week at the benefit premiere of Even the Rain, a film starring Gael Garcia Bernal (Amores Perros, The Motorcycle Diaries), April 17 at Summerfield Cinemas. Even the Rain, which “interweaves three stories, including the privatization of all of Cochabamba, Bolivia’s water in the 21st century, contrasting it with Spanish Conquistador’s domination and oppression of indigenous peoples five centuries earlier,” is the winner of three Goya awards, the Crossing Borders Award at the Palm Springs International Film Festival and the Audience Award at the Berlin International Film Festival. It is an international film touching on a locally relevant water issue.

The event includes a 3:30pm wine reception and a 4pm film showing, followed briefly by a panel discussion that addresses this question: Should water be controlled by multinational, for-profit corporations, or safeguarded by the public with strong local oversight and accountability measures?

The question and the event are presented by the nonprofit Wine Country Film Festival, to raise awareness through stories from the trenches in the battle to restore water resources to the public domain.

A few of the panel members are prepared to discuss their experiences in attempting to take back public water from private ownership, despite the difficulties of the undertaking. Residents of Mark West, Wikiup and Larkfield (wincing perhaps from recent water-rate hikes) may show up just to cheer panelists Jim Bowler and Pete Lescure, now working to create a water district so that the Mark West community can publicly own its own water source, which is now owned privately by the California American Water Company.

It can be done, and Felton panelist Jim Graham, representing the Friends of Locally Owned Water (FLOW), will explain how his town succeeded in taking water back from private ownership.

Other panelists will include Fourth District Sonoma County Supervisor Mike McGuire; Mark Schlosberg, national organizing director of Food and Water Watch; Dennis Welsh, retired wastewater manager of Novato Sanitary District; and Robert Rex of Deerfield Ranch Winery, which recaptures and recycles 98 percent of its production water and uses a steam-cleaning system for its tanks and barrels, reducing its barrel wash water use by 97 percent.