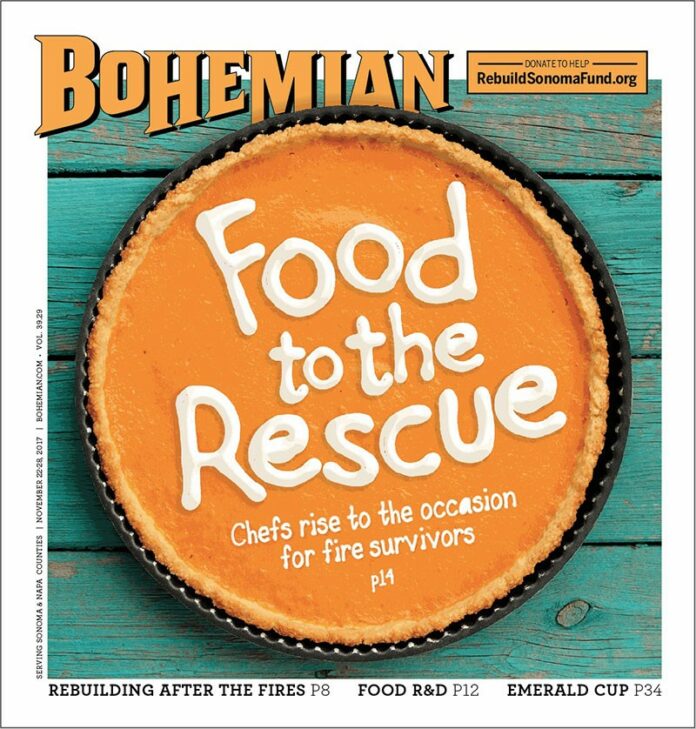 Food to the Rescue

It’s not quite an army of volunteers that wait for a truck to roll up to the service entrance of the Vintage House senior center on a recent Wednesday morning. The volunteers, mostly from the charitable Kiwanis Club of Sonoma Plaza, number about a dozen. But they do prove an effective force—and it could be said they have a capable general.

As soon as the refrigerated truck’s lift-gate hits the pavement, the volunteers pounce on a pallet of crates at the direction of a petite woman wearing a pink, knitted cap with pussycat ears. Sheana Davis owns the Epicurean Connection catering and culinary education center in Sonoma. During the North Bay fires in October, she found herself suddenly leading one of the area’s rapidly evolving, seat-of-the-pants food-relief efforts that paired Bay Area chefs with thousands of displaced people.

Now that the urgent needs of evacuees have past, the fires have exposed the continuing needs of thousands of people who are still on the edge. And the ad-hoc relief efforts are struggling to keep the supply chain going.

Breaking up the pallets and parceling out crates of donated food, which arrived direct from the kitchens of Facebook, Davis divvies them up on the spot: “Moose is 200 meals,” she confirms, rationing a portion for the charitable Moose Lodge of Sonoma. Then a marimba ringtone calls her away to the next 15-second negotiation. Every minute or two the phone chimes again.

When the fires forced Davis to evacuate her home, she and her husband landed at the Sonoma Valley Inn, in the same boat with many others there—just lucky to have their pets with them. “They were kind enough to let me bring my dog and my three very bad cats,” Davis says.

Davis had just catered a cassoulet fundraising dinner
for the Bouverie Preserve in
Glen Ellen.

“To know we were doing a dinner the night before, and wake up to have it burnt down, is surreal,” says Davis. But she had a refrigerator full of prepared food and 28 more events suddenly canceled, so she brought the gourmet fare to the hotel and began doling it out.

Meanwhile, Alexander Valley resident and food-policy advocate Melanie Wong evacuated only days before a planned trip. She decided it was best to just go ahead with her plans.

While waiting to catch her plane at SFO, she got a call from Steve Guilliams, a San Francisco engineer with family ties to the North Bay. He wanted to know if she could help with his idea for a “scaled strategy” to feed large numbers of people through commercial kitchens.

Through his Silicon Valley connections, Guilliams quickly secured a commitment for prepared food from Facebook chefs. “I talked to him Thursday,” says Wong, “and the first delivery was Sunday morning.”

Asked if she knew who in Sonoma County might be able to provide a ground game, Wong knew just the person—Davis.

Now at Sonoma Springs Community Hall on Highway 12, Davis and her staff and volunteers repackaged and served the donations from Facebook, as
well as from Jackson Family Wines and San Francisco chefs, under the banner No Pay Café/Café Gratis.

They served 7,500 meals a day at peak operation. Wong says Facebook is an ideal partner because chefs for the social media company already whip up grub for more than 30,000 employees on any given day. “It’s not hard for them to do 5,000 extra meals a day,” Wong says. “And it’s fresh, wholesome food.” It was served with no questions asked, no proof of residency required.

It also gave restaurants a break as they struggled to regroup, she says. “Our idea was, we’ll take care of feeding the people and give you the chance to get back in business again and kickstart our tourism economy and get our food system going again.”

On Nov. 1, the operation transitioned to a “virtual” No
Pay Café. Instead of serving meals out of a kitchen, Davis sends them out to charity partners, assisted by the Kiwanis. The need is still great, Davis says, but local charities, senior centers and shelters are best positioned to reach out to the communities they serve.

In the offices of the Council on Aging in Santa Rosa, there’s a zucchini about the size of a dachshund on a desk. No, it wasn’t a donation from someone trying to be helpful, says Sonoma Family Meal founder Heather Irwin—although they might as well make zucchini bread, she laughs. It was found in a volunteer’s garden—like the surge of support and volunteerism that made Sonoma Family Meal possible, another unexpected bounty that grew during the fires.

Irwin, a food and cannabis writer for the Press Democrat, is more worried about what to do with the half-ton of squash they just received from the Central Valley.

The Sonoma Family Meal story also starts in early October, when friends and family, including Irwin’s 93-year-old grandmother, gathered around a farmhouse table in Sebastopol in a daze.

“We were just sort of grabbing things out of the fridge and throwing them on the table,” Irwin says. “And it wasn’t a very impressive meal.” She knew that similarly displaced families were sharing their situation in crammed houses across the county. “Cooking for 10 to 11 people is not an easy thing to do—although now it looks like a snap.”

At the same time, Irwin was getting calls from her contacts in the restaurant world who wanted to help. “And they couldn’t really take pans of lasagna to the Red Cross.” So they asked her, “Hey Heather, how can we help?”

She thought she could bring the need and offers together. “And maybe for a couple of days, we’d do this silly little thing where we put them in these little half pans,” she says, picking up one from 60,000 cases of donated aluminum serving trays, “and it’d be a little gourmet meal—gourmet comfort food, really—but it would taste good, it would look good, and it would be served with dignity. And a hug. My mom’s the chief hug giver-outer.”

They set up at John Franchetti’s restaurant in Santa Rosa. Franchetti’s gas was out, but he had his wood-fired ovens. “I said, ‘Can we serve 800 meals in your kitchen?'” Irwin recounts, “‘because Traci Des Jardins [owner of San Francisco restaurant Jardinière] is sending us up prepared meals that we’re going to repackage for families of four to six.’ And he said, sure!”

Adding vegetables and fruit donated by local produce distributor FEED Sonoma, they put it all in an oven. “So we had these beautiful meals with a meat, a carbohydrate, and fresh, organic produce,” Irwin says. “Well, by lunchtime, we were pretty much out of food. And I panicked.”

Soon after Irwin buzzed her restaurant contacts, more food came down the line—from Josh Silvers, chef and owner of Jackson’s Bar and Oven in Santa Rosa, Sondra Bernstein, founder of Girl & the Fig restaurant in Sonoma, and many others. A team of volunteers prepped heaps of fresh vegetables at John Ash & Co., and the pickup point moved almost from day to day, with stops at Santa Rosa Junior College and the Santa Rosa Veterans Memorial Building.

Later, mostly focused on preparing meals from scratch, Sonoma Family Meal found a sweet spot at the Council on Aging/Meal on Wheels facility. Tucked away off Santa Rosa Avenue, it was, in fact, built as a disaster-relief kitchen but, surprisingly, had sat unused most of the day.

In the kitchen on Nov. 7, turkey has already been prepared and shipped out the door—with sides of herbed buttermilk mashed potatoes, beet salad with microgreens—and volunteers, certified to handle food (it can be done online in an hour, says Irwin), chop, slice and mix ingredients for the next batch. What’ll be made with those big slabs of smoked meat over there? “Good question!” says chef Matthew Laurell on his fast-paced travels around the kitchen.

Laurell is on loan from Mark and Terri Stark, for whom he’s still on salary as executive catering chef. But even then, he and his family may not have a place to live in a few days. That’s the kind of stuff that’s going on right now, says Irwin. “And this guy’s running a disaster kitchen!”

Meanwhile, volunteer Woody Mosgers, a caterer, stirs butternut squash into an outsized bowl of pasta. Bright orange, it’s reminiscent of mac and cheese—which raises the question: in a time like this, why not just mac and cheese? Why gourmet pasta, eggplant and microgreens?

“Because there are a lot of places you can go eat shitty food,” Irwin states flatly. “And I’m going to say that straight up. Because some of the food we’ve seen is literal garbage.” Whole pallets of kindly donated but spoiled food had to be tossed, Irwin says, and there’s more to her insistence on chef-made meals than foodie whimsy. “I’ve heard a number of horror stories that were happening all around our county,” says Irwin. “To me, it was real important that we did this professionally.”

At the pickup point in the Empire College parking lot, in front of cheery tablescapes of flowers and gourds (arranged by Irwin’s mother), volunteers greet people and ask them how many they’re feeding.

“We just want it to feel like you’re not in a Red Cross line,” Irwin says. “We have people that come up to us and say, ‘I never thought I’d have to ask for a meal.’ That’s kind of heartbreaking. That’s why we’re doing this, because we want somebody that thought they’d never have to ask for a meal not to feel demeaned and shamed by having to ask for one. I mean, I’d be pretty stoked to get that meal!”

“Thank you for being here,” says one recipient to Irwin’s husband, Jason Stanbrough, who’s overseeing what he calls a “controlled chaos” of rotating volunteers.

Everyone here seems appreciative, but not accustomed to lining up for free food. Not the middle-aged pair who pause to thank Stanbrough a moment later. “A lifesaver,” says the man toting a stack of trays, sounding upbeat, with a background tinge of the strain of the past weeks. “And the volunteers are so nice,” says his counterpart. “I don’t have to feel so . . .” She hesitates to say bad for walking up to take free food.

By Nov. 15, Irwin sounds weary. After serving an estimated 70,000 meals, Sonoma Family Meal won’t be able to make it to Thanksgiving. They have to cease service that evening. “We are really grateful for the community’s outpouring of love,” says Irwin, improvising her press release. “And we are going to look in to how to best serve our community in the future.”

The bright spot for now is that generous friends are helping Laurell and family to move into a tiny home.

Later that day, Sheana Davis checks the time and announces they’ve done pretty well: it’s noon and the volunteers have broken up three pallets, hauled the crates to their respective staging areas, packed up their vehicles and the meals are on the way to their destinations.

Packaged in plastic, the bulk meals are refrigerated, not frozen, and marked with temperature cooked and cooled, and meal type: scrambled eggs, sausage, hash browns and pasta. This is no Thanksgiving dinner, and Davis isn’t worried about whether the next drop is packed with dressing and yams or not. The holiday weekend is more of a concern, she says, because children are out of school extra days and parents who were already living paycheck-to-paycheck will be out of work that much longer.

“We’re feeding for the long haul.”