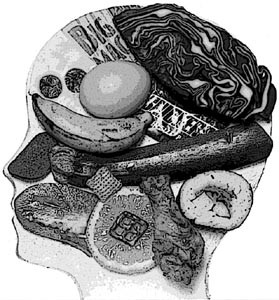 When it comes to mental attitude, you truly are what you eat

IMAGINE THAT IT’S lunchtime, sometime in the distant future. You check your schedule. There’s a 2 o’clock meeting with the representatives of the Earth-Mars business alliance. “Hmmmm,” you think, “that’s a high-pressure crowd of folks. Could be stressful. I need to prepare.” So you reach into your portable Mood Alteration Fix-It Kit and search around for the right combination of amino acids. You select a nice tab of tryptophan and a good tyrosine-and-magnesium chaser.

As you let the substances dissolve on your tongue, you know that you’ll be relaxed, energetic, and upbeat in two hours or so, just as soon as the chemicals cause your brain to produce the desired neurotransmitters into your body.

“Ah, what a brave new world,” you contentedly sigh, “that has such amino-based mood enhancers in it.”

Does this scenario seem appealing, if less than appetizing? Wouldn’t it be great if there were a way to safely and appropriately alter your mood according to the needs and demands of your schedule, your workday, your life?

Well, get in line at the checkout stand, because the future is now. Mood-altering substances are available as close as your nearest grocery store, need no prescription, and–in most cases–actually taste good.

They go by the name of “food.”

T HOUGH THE FOOD/MOOD connection is technically not new–folkloristic remedies for everything from a low sex drive to forgetfulness to depression have almost always been connected to the eating of certain foods. It is only in the last 20 years that brain researchers have determined what the connection is, and how it can be used to put us all in a better frame of mind.

What is most surprising is that this bold, functional new science is taking so long to work its way into–and have an effect on–our mainstream culture, a culture that is seemingly obsessed with finding the next great feel-good fix.

“I do think that is happening,” insists Santa Rosa nutritionist Kate LeTourneaux-Platt, whose own clients often are introduced to so-called amino therapy, with astoundingly positive results. “The notion that what you eat affects how you feel is spreading. But it’s spreading very slowly.”

It was Dr. Julius Axelrod, winner of the Nobel Prize for Physiology/Medicine in 1970, who got things rolling with his discovery of neurotransmitters, powerful nerve chemicals that operate in the brain. Neurotransmitters are made up of either amino acids–the building blocks of protein that are obtained through eating food–or a fatlike substance known as choline. The neurotransmitters relay messages from one nerve cell, or neuron, to another, essentially leaping the gap between each neuron. Without neurotransmitters, communication would shut down, and nothing in our body would function.

At least 40 different neurotransmitters have been identified, regulating nerve functions such as memory, appetite, movement, wake/sleep cycles, and mood. Though many of these are manufactured naturally within our bodies, there are four neurotransmitters that are made directly from food components. These are serotonin, dopamine, norepinephrine, and acetylcholine.

The amino acids in different foods cause different neurotransmitters to be released, causing subtle–and sometimes not-so-subtle–shifts in our mood, performance, behavior, and energy level.

In short, we really are what we eat.

“A high percentage of first-time clients come in saying, ‘I want to look better,'” says LeTourneaux-Platt. “So we start there. But my ideal client is the one who comes in saying, ‘I want to feel better and be healthy.’ Biochemically, we haven’t changed since Neolithic times. What our bodies want and need are pretty much the same. It’s our hectic lifestyles that have changed, and using what we know now about the effects of food on our mood, we can make incredible shifts toward lowering our stress levels and feeling good again.”

Though any radical changes in diet should always be planned with a skilled dietitian or doctor (one who knows the client’s individual needs and possible allergies to certain foods), with a little guidance and newfound knowledge, almost anyone can experience the even-keeled solace and positive outlook that come from a well-planned selection of foods.

Whole grain breads, containing the aforementioned amino acid tryptophan, help boost levels of serotonin, the soothing, mood-elevating brain chemical that just happens to be the one that Prozac stimulates. Turkey, tuna, and chicken are rich in tyrosine, a booster of the chemicals dopamine and norepinephrine, promoting improved levels of attention, motivation, and reaction time. The vitamin C in oranges and grapefruit helps raise your brain’s levels of norepinephrine as well, reducing irritability while increasing your energy. When capsaicin, that hot stuff in chili peppers, burns nerve endings in the mouth, the brain receives pain signals; so it secretes through the body those wonderful natural painkillers called endorphins, giving us a gratifying, morphinelike rush.

And everyone knows that chocolate affects the same part of our brain that is tickled when we experience feelings of love; this is due to chocolate causing the release of the comforting chemical phenylethylamine, along with the serenity-causing neurotransmitter serotonin.

THOUGH IT’S NOT quite as straightforward as it sounds–some amino acids counter the effects of others if taken together, and individual health considerations occasionally come into play–the positive benefits of a balanced diet have been proven to go far beyond the conventional issues of fitness and body shape.

“A person who is feeling blue or feeling sad and doesn’t know why can certainly be helped by appropriate changes in their diet,” affirms Petaluma nutritionist Najine Shariat. “But if someone is eating in order to feel good, there is a danger of slipping into disordered eating, snacking on things like high-fat carbohydrate foods, that could make the mood even worse. It takes a bit of education, but diet is an excellent way to improve one’s mood.”

Mood enhancement is only the beginning. There are increasing reports that the food you eat can possibly even make you rich.

InnerNet Research Inc., in Mobile, Ala., is a non-profit organization of business people and doctors who caused a stir among the business community with their self-published report, Food, Mood and Money: The Powerful Link Between Diet, Boldness and Wealth (rev., exp. ed., 1997, available by calling 800/513-1984).

The basic premise of their report is this: Since mood determines your level of success–positive people with bold, fearless personalities and the self-confidence to tackle difficult situations tend to go farther in life than those struggling with what they’ve come to call “negative inner states”–and since your diet can radically improve your mood, financial success will be the result of a strategically planned diet.

“My own business [selling anti-terrorist devices such as flak jackets and X-ray machines] has increased by a factor of 10 since I changed the way I ate,” says Helmut Julinot, one of the authors, taking his turn answering phones that haven’t stopped ringing since the all-volunteer group established their award-winning Internet site (http://www.defend-net.com/fearless-food) to promote their findings.

“Before, I was struggling to make sales, while spending a fortune on motivational tapes and books and things,” Julinot says. “I could occasionally psych myself up into a heightened mood, but it was forced and fake. You can only go so far whipping yourself and saying, ‘I must! I must!’ Success is not all mental. It’s physical as well.”

By selecting a balanced diet of foods specifically chosen for their particular amino acids, Julinot and associates transformed their attitudes and, they claim, their fortunes.

“Last year my company made almost $2 million,” says Julinot. “I feel braver now. I do the chancier, bolder things that are necessary in business.

“People can’t believe it,” he laughs. “That all this good can come from knowing what foods cause what moods. It’s a very subtle thing, but it makes a tremendous difference.”