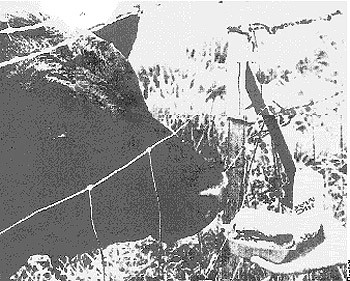 Burned at the Steak

AS MUCH AS it pains me to report this–some of you are still eating red meat! I know, I know. It’s almost Cro-Magnon, but there it is. Beef is still what’s for dinner in many philistine homes, homes where Coors Lite is the beverage of choice, where Kools are still smoked, and where the television has been on continuously since Gerald Ford was in office.

Let’s call these the Households of Darkness. The corpulent residents of such households–let’s not even use the word home to describe these troughs of ignorance–still order bacon with their eggs and dress up for a trip to McDonald’s.

Picture them. Obese, clad in polyester, they are well on their way to adult-onset diabetes. Apparently too fat to leave the house, these unfortunates haven’t yet gotten the word about cholesterol. They’ve heard about it, but they don’t quite get the connection between the C word and sudden death by stroke or heart attack.

All that butter, all that animal fat goes directly to the arteries, where it sits. It sits and waits for other globs of animal fat. Then when there are enough globs they form a fat blockade and prevent the flow of blood to important areas, like the heart and the brain. In short, the meat-eating bubba gets stupid and dead quicker than the rest of us.

Why, then, are people still eating meat? First of all, there’s that Genesis thing–you know, where God gave man dominion over the animals. Many a Republican likes to sling that quotation around as sort of a Judeo-Christian carte blanche to destroy every living thing that isn’t nailed down.

Actually God was giving humans permission to take care of animals–not to slaughter and eat them. Furthermore, in the first book of Genesis, God also gave Adam and Eve every manner of plant as their food. Not pork ribs and rack of lamb. Not bacon bits and Vienna sausage. The Garden of Eden was a veritable vegetopia, and only after the unfortunate incident with the serpent was the first bratwurst created.

THEN there’s this masculinity thing surrounding the consumption of red meat, the bloodier the better. Today’s insecure carnivore male actually believes that real men don’t eat quiche. Many a sagging ego (itself a metaphor for another sagging entity) has been propped up by a bacon cheeseburger from Burger King (430 calories, 10 grams of saturated fat).

Hey, it was “dominion,” guys. Not “domination.” Given that menus refer to carcasses euphemistically, there isn’t even an honest respect given to the animal being consumed. “Chateaubriand” is really “dead cow,” French or no French.

That we are squeamish about eating red meat is evident in the distance that is placed between the product we consume and its actual source. An ex-New Yorker confessed to me several years ago at a gathering in the Santa Cruz Mountains, “I was 20 years old before I found out that beef didn’t come wrapped in plastic.”

Those quarter-pounders you’re wolfing down (590 calories, 11 grams of saturated fat) contain the flesh of what was once an 800-pound creature. That delicate foie gras is actually a vital organ of a beautiful and intelligent bird. It always sounds less cruel in another language, doesn’t it?

How many of us would even consider eating baby back ribs if we first had to catch, kill, and butcher the pig itself? At least the ancient Romans were honest. They brought the entire pig to the table and pulled it apart with their bare hands. Barbaric, but direct. One visit to the stockyard, any stockyard, would cure most of us of that hankering for a big ole juicy steak. (And what is this need for quantity? Steaks are invariably listed on menus in terms of their weight, as if eating more is a sign of power, or machismo. Eating a steak the size of Anchorage is only a symptom of one thing: gluttony.)

Now I might cut some slack here if we were living in North Dakota, where fresh vegetables are an endangered species, where grown women have never even seen an artichoke, and everything comes from a can or a box. But this is California, where perfect, fresh, organic vegetables outnumber even cell phones.

I’m convinced that people continue to eat red meat because they’re lazy and because they’ve convinced themselves that they are immune to statistics. If we weren’t intended to eat meat, God wouldn’t have made Rolaids.

It’s quicker and easier to just swing by Burger King-where a Double Whopper with cheese runs a terrifying 1,020 calories and 25 grams of saturated fat-than to buy unprocessed vegetables, noninstant rice, and maybe some fresh salmon, and actually prepare it yourself.

Fast food is really fast grease, and everybody knows it–including the disgustingly overweight people who frequent places like KFC and McDonald’s. As for not believing the statistics, even if you only watch TV you’re aware of the health dangers (never mind the environmental ones) of eating red meat, which just recently was linked–again–with colon cancer.

It’s amazing how meat-eaters think that vegetarians are weird. Is it weird to be lean and healthy? Is it weird to respect our bodies and not poison them with decaying carcasses of fellow living creatures? Is it normal to stuff ourselves with what George Bernard Shaw called the “scorched corpses of animals”?

It’s gotta be a self-esteem issue for those of limited reasoning ability. I may be a loser, the carnivore thinks, but at least I’m better than this dead critter I’m eating.

And then there’s the snob value, the arriviste factor of meat-eating.

Only peasants would willingly eat a meatless meal, bubba believes. The ability to put a chicken in every pot and a steak on every plate continues to be a sign of status. Savvy vegetarians in the West figured out that the way to combat the snob appeal of beef was by giving even greater status to designer produce. Portobellos now have as much clout as Porterhouse, heirloom tomatoes can command prices once reserved for carpaccio.

THIS IS A GOOD sign. Because the reasons to remove red meat from your life are many. Ethically, it’s unconscionable to pamper your pets and still be a partner to the slaughter of cattle, sheep, bunnies, and pigs. We share this planet with others. They don’t kill us, and we can survive quite nicely without killing them.

Legumes, green leafy vegetables, fruits, soy products, whole grains–put them all together and you’ve got delicious paths to health and longevity. Bubba will die sooner and more horribly than those who follow the meat-free lifestyles of Tolstoy, Buddha, Leonardo da Vinci, Cesar Chavez, Gandhi, and Albert Schweitzer. (Even a pig like Hitler was smart enough to give up meat.)

If you enjoy being permanently overweight and plagued by arthritis and indigestion, keep chowing down on bacon, burgers, and barbecued ribs. If you want to contribute to the death of the planet, the eradication of green space, and the pollution of clean air, then by all means make McDonald’s your favorite restaurant. And if death by heart attack sounds good, Sizzler awaits. Remember, you are what you eat. Dead meat.