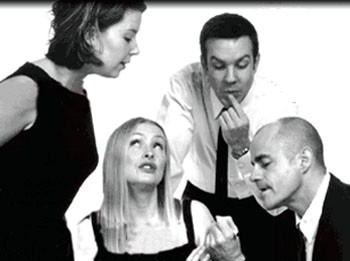 “SORRY if I’m out of . . . breath,” gasps Kevin McGeehan, answering his phone after several rings. “I was just doing some pushups.”

But, hey–good for you. In these troubled times, we should all endeavor to remain in peak mental and physical form. That’s especially true of folks like McGeehan, whose occupations carry such a high potential for danger, trained professionals whose daily mission involves working with crowds of stressed-out people under unpredictably volatile conditions. Yes, the physically fit fellow on the phone holds what is, these days, one of the toughest jobs in America.

Kevin McGeehan is a comedian.

“Comedy is at a weird point right now,” he says. “Nobody’s sure what’s funny anymore. There’s been a very weird vibe since the attacks, where anything a comedian says can be misconstrued. People really do want to laugh again–there is an audience for comedy–but we really have to be on our toes.”

And they have to know which toes can be stepped on–and how hard.

A member of the legendary Second City comedy troupe–based in Chicago, with theaters in Toronto, Detroit, and Cleveland–the red-haired McGeehan has been slogging knee-deep through the wounded American psyche, traveling the country with one of Second City’s three six-person touring companies.

Today he’s back home in Chicago, winding down (and bulking up) in preparation for a brand-new, West Coast road-tour that will begin with a two-act retrospective show–it’s ‘The Best of Second City”–on Oct. 18 at Analy High School in Sebastopol.

According to McGeehan, the current show is an 80/20 blend of classic sketches and songs–tapping into Second City’s 40-plus years’ worth of archival material–and brand-new routines that boast a heavy dose of on-the-spot improvisation.

Representing the tried-and-true is one sketch–an old favorite–in which a boy at a baseball game tries to get the attention of his sports-obsessed dad with increasingly outrageous behavior. An example of something new–a piece written by McGeehan–shows what happens when a Christian rock band is accidentally booked to perform for students at a public high school and is forced to rethink its songs, replacing the word God with the principal’s name, Frank.

“If you take the word God out of a song about God,” says McGeehan, “It makes the song a whole lot funnier.”

“Sure, but you can’t avoid it,” he says. “What makes one person laugh makes someone else boo. The point is, people need to allow themselves to have fun, to get their minds on something else–at least for one evening.”

To that end, McGeehan and company are prepared to help.

“We’re ready to start taking some chances,” he says.