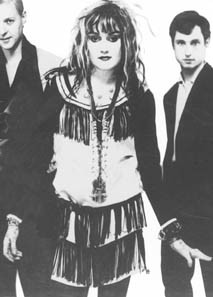 One band’s ‘Wild Gift’ to rock and roll

X WASN’T the first punk band to make the scene in Los Angeles, Rolling Stone once reasoned, but it definitely was the first one that mattered. At a time when most L.A. punk bands merely aped the sound of their London and New York counterparts, X invented a unique metal-edged, high-octane rockabilly-based sound that stood head and shoulders above the pack, thanks to deep roots in the storytelling tradition of Woody Guthrie.

Music writer J. D. Considine once opined that the band’s strong suit was that its early songs were “so obviously and audaciously intelligent, with verses that read more like poetry than punk doggerel.”

Over the years, and especially in the solo works of singer/songwriter Exene Cervenka and ex-hubbie John Doe, the band members have continued to produce intelligent underground rock, reuniting for occasional concert tours.

New reissues show that X remains the only L.A. punk band that matters, pioneers of an edgy brand of Americana music rich in country-inflected harmonies and guitars, unafraid to explore the nation’s seamy underbelly, and inviting comparisons to film noir and the work of Bowery bum-cum-Beat poet Charles Bukowski.

Now, 20 years after the release of X’s 1980 debut, Los Angeles (Slash), the band is once again being acknowledged for its influence with the release of expanded and digitally remastered versions of its first three albums on the Rhino label.

The X material is part of a wave of similar expanded ’70s and ’80s reissues flooding the marketplace these days and showcasing Elvis Costello, Velvet Underground, David Bowie, T Rex, and others.

Los Angeles–hailed as one of the most astonishing debuts ever and ranked No. 4 on Spin magazine’s recent Top 50 Punk Albums of All Time list–is steeped in the dark side of that city’s urban mythology. It includes the demented rapist portrait “Johny Hit and Run Paulene,” an amped-up take on the Doors’ “Soul Kitchen,” and the existential angst of “The World’s a Mess (It’s in My Kiss).”

The gem among the X collection–although all these influential recordings belong in the library of any serious rockhound–is Wild Gift (Slash), voted No. 1 Record of the Year by both the L.A. Times and the New York Times upon its release. This is the ultimate ragged ode to lost souls, from the desperate plea of “Adult Books” to the fatalism of “We’re Desperate.”

The expanded reissue contains seven bonus tracks, including three singles mixes and a fiery live version of “Beyond and Back” (previously released on the 1997 X anthology).

Under the Big Black Sun (Elektra) is a darker, more menacing, and more rock-oriented album, colored by a desire to pen songs outside of L.A.’s gritty bar scene and reflecting the depression that settled on Cervenka after the death of her sister. In many ways, this is X’s most accessible album (although I confess to preferring the less even and often maligned fourth album, 1983’s More Fun in the New World). “Motel Room in My Bed” is as close to a pop song as the band ever got, and the plaintive “Come Back to Me” (an homage to Exene’s sister) echoes the great R&B death ballads of the ’50s, replete with guitar arpeggios and a sax solo.