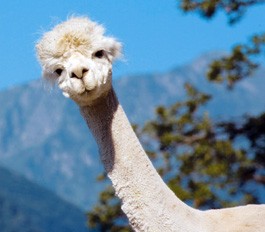 Fleeced by the New Red Meat

Such 'novelty' animals as alpacas, llamas, emus and ostriches have turned out to be poor investments for aspiring ranchers

Alpacas came to the North Bay 25 years ago, and in the decades since, thousands of entrepreneurs around the state and the nation have invested heavily in the small exotic-animal cottage industry, many with the hopes of striking it rich. While the shaggy beasts, natives of the Andes and relatives to llamas, vicunas and camels, can sell for thousands of dollars apiece, and while their fleece may be softer, finer and silkier than that of sheep, the value of the animals and the entire industry itself took a big hit with the economic crash of 2008. Industry analysts say the game is over, that those who bought in are unlikely to recover lost capital, but local alpaca owners insist the crash is just a slump, and now, they say, is the time to buy.

Veteran alpaca owner Vicki Arns calls the current state of things “a buyer’s market, like real estate.” Arns, with a little help from her husband Don, operates Alpaca Shire in Sonoma, the oldest alpaca ranch in Sonoma County and one of the oldest in the nation. Founded in 1985, the farm began with the purchase of several animals, including a now 25-year-old male, or sire (females are called dams), who was among the very first alpacas to arrive in the United States from South America.

Back then, Arns paid as much as $12,000 a head. The market was hot, and Arns hoped she might be able to pull in a viable income entirely off the exotic animals, mostly through selling their offspring, supplemented by fleece production. Arns began selectively breeding her animals and building her herd, and last summer a peak population of 30 alpacas from six generations ranged over her two-acre pasture.

While gentle and rewarding pets, the animals haven’t exactly paid off, Arns says. She shears them in the spring and sends the raw fleece, also called “fiber,” to mills, including one in Yreka, where machines clean the material and spin it into yarn. Arns then weaves the processed fiber into garments and sells them onsite, but proceeds don’t cover the overhead costs of maintaining the farm, and sales of animals themselves have dropped off steeply. Arns calls the business “a labor of love.”

(For his part, husband Don calls the alpacas “yard ornaments.”)

Now Arns is trying to sell as many as a third of her animals, aiming to cull the herd down to 20. She sold two alpacas last fall, in fact, though they went for half the price that they would have pulled several years ago. “And that,” says Arns, “was still a pretty good deal.”

Animals of the Andes

Alpacas, Vicugna pacos, have been bred for thousands of years in Chile, Peru and Bolivia as fleece- and meat-producing livestock. Of two breeds—huacayas and the less prominent suris—alpacas number as many as 3 million in Peru alone, where they graze on high chilly pastures up to three miles above sea level. Minimal effort or cost is spent making the animals comfortable, and massive factories process their fiber at hugely profitable economies of scale.

In fact, imports of cheaply made Peruvian alpaca products compete with American weavers and fleece millers, though farmer Mark Emery of Brookfarm Alpacas in Glen Ellen says sales of raw fiber and yarn, which he and his wife, Debbie, produce onsite, continue at an encouraging rate. The Emerys, who bought several pregnant females four years ago and have since bred their herd’s numbers to 24, have even launched a new CSA program in which city slickers and other faraway fleece fans can purchase yarn, carpets, scarves and other farmstead alpaca products. The Emerys also had planned to sell their alpacas for profit before the crash hit, says Emery. “Now, we’re waiting for the market to rebound.”

Dr. Rich Sexton, a professor of Agricultural and Resource Economics at UC Davis who has studied the alpaca industry, doubts that it will. “There is no hope of returning to those halcyon days of huge prices,” Sexton says. “The economic fundamentals are crystal clear. It doesn’t take a Ph.D. to see it. [Alpaca’s] fiber in this country is next to worthless.”

Prices have never been lower. Just several years ago, an alpaca of excellent fleece quality could move for $35,000 while females averaged more than $10,000. In 2005, one super-stud in Virginia named the PPPeruvian Royal Fawn sold for $600,000. More than 300 offspring owe themselves to the rigors of this huacaya sire, whose stud fee has run as high as $5,000 a pop. Another stud, the now-deceased 4Peruvian Legacy, sold for even more in 2006 when a half-share in the animal drew $750,000.

But today, alpacas sell, comparatively, for pennies. “I’ve seen some people selling their animals for $2,000,” says Arns. “I won’t do that.”

Fleece sales barely, if at all, turn profits. The fibers sell for just $2 to $4 per ounce, and an animal with especially dense fleece may produce 10 pounds of fleece annually. Most produce less, and at the very best an alpaca may generate several hundred dollars of fleece per year for its owners. Sexton says the fact that the one marketable product of the animals is “worthless,” combined with the fact that the animals themselves are now, relatively, almost worthless, makes the industry itself worthless.

Indeed, Arns says that alpaca profits are made through sale of the animals.

“The real money is in the alpaca,” she says. “You make way more from selling them than you do selling their fleece.”

In 2007, Sexton and co-author Tina Saitone published a paper in the Review of Agricultural Economics that closely analyzed the alpaca industry. The authors determined that the trade was just another “speculative bubble,” an insular industry based initially on high hopes and risky speculation, thrives for a time on investor enthusiasm and ultimately fails. Such industries follow a three-stage pattern, the paper states, beginning with mania. Distress follows. Finally, panic ensues as owners try to sell out as prices tumble. Ultimately, so goes the model, speculators are left with a farm full of yard decorations.

The text, published a year prior to the economic crash and first drafted in 2005, reads like a prophecy of the alpaca industry.

“During [the panic stage], investors rush to sell their assets before prices drop further. Yet the sale of assets only serves to further perpetuate the decline in asset valuations.”

This crash, the authors write, signifies the “bubble bursting.”

Classic cases of past speculative bubbles include the chinchilla, ostrich and emu industries, according to Sexton. The emu, a 100-pound flightless bird native to Australia, was hyped as the beef of the 21st century by marketers (“the new red meat”). That was before the 21st century actually began, and such predictions would prove less than accurate.

Today, American emu farms are in a state of attrition. Feather Farm in Napa once kept emus. Co-owner Arlyta Brown says the investment, first made in 1987, was potentially lucrative, with each pair of birds capable of producing 60 chicks per year. Emu meat, she says, is lean and healthy, while just under the animal’s hide lies a layer of fat marketable as an anti-inflammatory ointment. (Whether it really works is another story.) “Emus,” Brown declares, “could have been an excellent source of Third World protein.”

Could have been, but slaughter facilities were too clogged with beef to accommodate any competing meat source, and early last decade, Feather Farm sold away its last emu. Around the nation, other emu farms have disbanded one bird at a time as the industry has proven worthless, though the big birds remain on scattered ranches. Emu Enterprises near Redding still owns 40 emus.

“We once had a hundred,” says owner John Smelcer, who produces and sells emu salami, ground beef, steaks and oil. “Now we’re hanging on, hoping that things will come back.”

The ostrich industry, meanwhile, is entirely defunct. After its own boom, it went the way of the dodo in the late 1990s. In the years prior, enthusiasm drove prices high. Meat, hide and feathers were believed to be fortunes in the making. Then reality kicked in. Supply of the fast-reproducing birds vastly outsized the demand, peaking with a U.S. population of a quarter million ostriches in 1995 but no one interested in eating them; the old red meat, beef, was still the thing for dinner. Prices crashed at a capsizing rate of a quarter of a percent daily for six years. That marked the panic stage of the bubble model. By 1999, the giant birds in America were virtually worthless.

Alpaca optimists remain. Targie Lewis says now is the time to buy. Lewis and his wife, Laura, bought in six years ago, taking a package deal on several females for 20 grand, and today 29 alpacas graze the grounds on the three-acre property in Wooden Valley near Lake Berryessa. Females are valued because of their capacity to produce an alpaca baby, or cria, every year. This economic thread is based on the assumption that alpacas are worth having at all, and Lewis concedes that they may be just a financial drain until the industry works out its kinks.

“One of the main things is that we need to find something to do with the retired animals,” he says.

An alpaca whose fleece was soft and silky in its youth may bear entirely unmarketable, coarse fleece by the time it is just a decade old, says Lewis. For an animal that can live 20 years or more, this creates a substantial problem for those struggling to make their money back through fleece production.

In Peru, the solution is simple: retired alpacas are eaten.

“That grosses me out,” says Arns, who initially bought her first animal, a $12,000 female named Bonnie, as a pet. Lewis says American breeders tend to cultivate relationships too intimate with their alpacas for a meat industry ever to launch.

“We spend time with them, trim their toenails, see them face to face,” Lewis says. “They look cute, and we get to know them by name, and it makes it hard to even think about sending them to be butchered.”

Yet Peru’s fleece industry, streamlined, successful and sustainable, may be worth imitating. For now, cheaply made imports of South American fleece undercut the prices of local fleece producers. Lewis, who is still building his herd and believes the industry will find its feet, encourages consumers to bypass alpaca products made in South America.

Arns, though, can’t blame those who don’t.

“Frankly, Peru makes a better product. We can’t match their quantity or quality. We have a lot of catching up to do, and I’m not sure we ever will catch up.”

Glass in Your Glass?