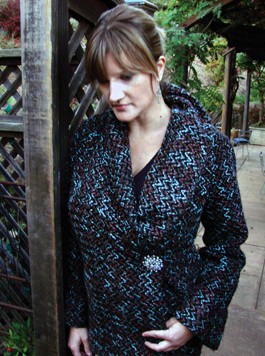 Ann Trinca wants to make a zine again. She misses the way all different types of art come together on the page—the colors, the images, the layout. She misses the hands-on, organic aspect of zinemaking, like cutting paper with scissors and hand-sewing the spines. She misses uniting varying artists’ styles in one cohered space.

Indeed, a zine—Trinca co-created and -published the post-feminist DIY volume Pearl Necklace for two years—is a microcosm of what Trinca does in the Napa Valley. Living in a region known for food and wine, the 38-year-old has fostered, coalesced and championed the largely unknown bustling arts scene since settling in Napa in 2002, and for that, we are glad to make her a Boho Award recipient.

Born in Sacramento, Trinca took a love to the arts early, moving to San Francisco as soon as she left home. She studied philosophy at the University of San Francisco. “But I found,” she says, “when I started going to the museums and galleries there, that artists really spoke to me more about the human situation. I learned a lot more from looking at the visual arts than I did reading philosophical texts.” She switched gears, got a masters in arts administration, and began her career at the Yerba Buena Center for the Arts.

After living in San Francisco, Trinca relocated north to what she remembers as “a bit of a shock to my system” for a job with Arts Council Napa Valley. When funding ran out, she worked as a gallery manager and program manager at the di Rosa Preserve for three years. She soon discovered that though there was art happening all over in the Napa area, there wasn’t any one place to bring it together.

It was at the Nest, the space she and partner Norma Quintana founded behind the Jessel Gallery in 2007, where Trinca brought her unique vision to fruition. With the motto of “live creatively, give generously,” Trinca and Quintana hosted a series of experimental events and shows, each one bringing artists more closely together. A Warhol-themed “Factory Dance Party” featured Campbell’s soup prizes; a make-your-own-tiara workshop was conducted because “everyone deserves their own crown”; artists worked directly with attendees building dirt and bug worlds for a terrarium workshop; a Westward Film Fest showed projected short films outside; and an exhibition of photographs from Indonesia by students at Solano College was accompanied by an avant-garde gamelan performance by Gamelan X.

The Nest this year lost its space, but by making connections far and wide—Trinca, a vegetarian, once brought Meatpaper magazine, Scratch ‘n’ Sniff TV, the Secret Eating Society and the Fatted Calf Charcuterie in for a meat-themed art show—she feels strongly that the North Bay can become an outpost for contemporary art. “I think we just need to connect!” she says. “I feel like there are a lot of different pockets of activity. The ultimate goal of art, for me, is human interaction. So we’re interacting with our audiences, but they’re all clumped together and not talking to each other.”

Thus, Trinca builds a buzz around local art events by covering them on her blog, Flourish, and to those who declare that there is no art scene in Napa, Trinca can now generally list 20 art events happening on any given weekend in the valley off the top of her head. Much of it is grass-roots and organic, unfunded and meted out in small, DIY helpings. With her background, and with her own art studio, Trinca sees the groundswell underway—and she’s working with a local arts organization, Wandering Rose, to found a brick-and-mortar community space for all forms of art to mingle and grow together in the valley.

“It has so much potential,” Trinca says of Napa. “The mix of people is right. It really is the friends that I’ve made, and the artists that I know now who are keeping me here. Rene diRosa was an inspiration to me. He said that the art world defines our region—the artists who are living and working in the area. So I think it’s important for Napa to have its own identity and not just be the neighbor of San Francisco. And I think we can do it.”