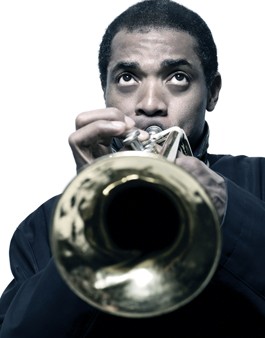 For decades, the afrobeat genre has been synonymous worldwide with the Kuti family name. The late Nigerian legend Fela Kuti pioneered the hybrid style in the 1970s, giving it a name and a role as the militant voice of his common countrymen. Not far behind was eldest son Femi Kuti, the current torchbearer who brings his modern innovations to the Sierra Nevada World Music Festival and San Francisco’s Fillmore next month. Kuti’s first album in eight years, Day by Day, shows him forging his own musical identity and moving past his father’s shadow with tinges of gospel, soul and afro-jazz.

“The compositions are more mature, and I was more experienced in the studio,” says Kuti via phone from his Lagos home. For the set, he honed his piano and trumpet skills to complement his usual alto saxophone. “And I’ll try to make something much better than Day by Day as well!”

Always looking forward, Kuti has been a progressive force ever since he joined his father’s group as a teenager in 1978. In ’86, he formed his own 17-piece band, Positive Force, which still incites rapturous acclaim for vibrant performances. Kuti’s demand skyrocketed 11 years later when his father died from AIDS. He also lost his sister in a year poignantly revisited in the song “97.” Refreshing for music legend’s spawn, Kuti exhibits no chip on his shoulder.

“I love my father, so [the comparisons are] not a big deal,” says Kuti. “He’s my father, and I can’t run away from that fact.”

Rather, Kuti has augmented his father’s legacy for the 21st century, from the hip-hop theme of 2001’s Fight to Win to his personal life, which contains none of Fela’s polygamy, drug use and promiscuity.

“I wish he did things differently,” says Kuti, who is a married family man who promotes safe sex and refrains from drinking or smoking. “Maybe I’d have had an easier life, but maybe I wouldn’t be where I was today. Life is about obstacles, and you just have to find a way around them.”

Sadly, the disease that claimed his father has since ravaged the entire country. In Nigeria, about one in 25 people is infected, due, Kuti feels, to a lack of education and the same naive government who banned his pan-African hit “Beng Beng Beng” for its sexual subject matter.

“I’m still scared for Nigeria, because we’re still very far from the ideals,” Kuti says. “We should have good education and good healthcare for everybody, electricity, good politics, no corruption. The corruption now is a cancer, a very bad cancer.”

Although Nigeria boasts one of the world’s largest oil reserves, nearly 60 percent of its 140 million population live in poverty. Even in Lagos, electricity is still not ever-present. Kuti believes increased trade and tourism and political empowerment is crucial to brighter days. “If I want to be optimistic, I would say yes, there’s always room for change,” he says. “People may move in a positive direction, but the way we are right now, it will take more than a miracle to really change things.”

Still, Kuti is a Nigerian for life, especially with the Shrine. His thriving Lagos club is a hub for progressive youth, much like his father’s Kalakuta Republic, and the site of bi-weekly performances. “I try [new songs] out for at least a year before the studio,” he says. “I like to see the reaction of the people, and to really trim it down or get it close to perfection.” The attack on patrons by local soldiers last year—and the Nigerian media’s willful ignorance—does not deter Kuti.

“Nigeria is my home, my life. There are too many who depend on and admire me staying here my whole life and not running away from the problem,” he says. “I couldn’t abandon them because I wanted a better life. Too many people have said, ‘You never left the struggle for greener pastures.'”

While his father sought the presidency at one point, Kuti’s goals are more humble. “I’m always striving for a good life and for a better self,” he says. “I want to make my family happy, and if I can please many people with my music, I’ll be content.”