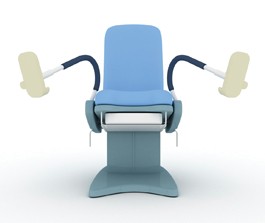 TIME TO HANG UP THE STIRRUPS: Dr. Newhard’s patient ‘Kathy’ was used to his off-color jokes, but when he touched, pinched, slapped and prodded her inappropriately, she took action.

After three days of testimony, a judge last week ordered a 79-year-old Novato family practice physician to stand trial on a charge that he sexually assaulted one of his patients.

Dr. Horace Newhard denies the charge and, through his attorneys, insists that his pelvic and breast examination of a 60-year-old Sonoma woman was medically appropriate. In taped testimony played during his preliminary hearing, though, he did admit to both the patient and a police detective that he was attracted to the patient. The married physician also conceded in the tapes that he may have acted improperly in September 2007 when he hugged, kissed and pulled the patient toward him after he completed what she described as painful and sexualized pelvic and breast exams.

With his wife, daughter and one of his longtime patients sitting in the courtroom, the white-haired physician displayed no emotion when Marin County Superior Court Judge Paul Haakenson ruled that “there’s at least a strong suspicion that he harbored sexual intent” when he inserted his finger in the Sonoma woman’s vagina.

Newhard has been practicing family medicine in Novato since 1973. After the district attorney’s office filed criminal charges against him last fall, the state medical board restricted his license so that a chaperone must be present when he examines female patients.

Some of the alleged indiscretions took place more than 30 years ago, when reports of sexualized medical examinations rarely came to light. One former patient told Novato police detective Sophia Winter that in the 1970s, while Newhard was performing a pelvic examination, he asked her a series of intimate questions about her sex life and then touched her clitoris. “She told me she’s never told anyone about it, including her own husband,” Winter testified. “She was too embarrassed.”

The former patient who brought the current charges testified over the course of two days, at times breaking down in tears and averting her eyes from the doctor. Named as Jane Doe in the criminal charges, the patient allowed prosecutor Lori Frugoli to call her Kathy in court. Now 62, her chin-length brown hair frosted with highlights, Kathy testified that she brought the charges against the doctor who has overseen her care for more than 30 years because she did not want anyone else to suffer as she had.

“It could have been my daughters,” she said, her hands clasped before her on the witness stand. “And what was done I don’t want to happen to anybody else.”

Kathy said she was used to Newhard’s off-color jokes. He would tell her, for example, that she could always get a job as a topless dancer. But she was shocked when he insisted that she come in for a Saturday appointment and sent his assistant home just before rapidly thrusting something three times into her vagina. Kathy was prepared for the doctor to look at her vagina, which had been itchy, but she was unprepared for the unexplained penetration.

Kathy testified the doctor then pulled on her nipples. After Kathy got dressed, she said Newhard put his hand on her buttocks, pulled her toward him and kissed her on the lips.

“I got into my vehicle, and I can remember putting my head on my steering wheel and thinking this could not have happened,” Kathy testified.

She at first told no one about the incident. Then, two weeks later, on a Saturday morning, Newhard called her. He inquired about how Kathy was feeling on the medication he had given her to relieve the vaginal itch. Then he told her he was going to Sonoma and invited himself to her home. He asked if she was dressed. When she replied she had not yet put on her clothes, she testified, crying, “He said he wanted to come to my house because he wanted to help me put my breasts in a bra.”

Feeling compelled to report the doctor’s behavior, Kathy then made a series of calls that led to a Novato police investigation of Newhard. In October 2007, police taped a so-called pretext call Kathy made to the doctor. The prosecution played a tape of the call in court.

In the tape, Kathy asked Newhard why he kissed her, and he responded, “Because I like you. I’ve been hugging and kissing my patients a lot more lately. I’m not trying to come on to you, Kathy. You’re a very attractive lady.”

He went on to apologize for his “exuberance.”

In November 2007, Kathy went to Newhard’s office under the pretext of talking to the doctor about her thyroid lab work with a tape recorder hidden in her purse. One Novato police officer monitored the tape from the waiting room, and another officer monitored it from the parking lot.

The prosecution played the tape of Kathy’s visit in court. When she asked him about that day in September 2007, the physician replied, “I sort of got carried away. I don’t have a good explanation for it. I’m particularly sorry that I got exuberant. I thought I got some feeling from you, and I misinterpreted it.”

“You thought I was accepting your advances?” Kathy asked.

“What really bothered me is what would I have done if you had been responsive,” Newhard said. “That really worried me.”

In July 2008, Detective Winter asked Newhard to come to the police station, where she videotaped a 25-minute interview with him. Asked why he kissed Kathy, Newhard said, “I kiss a lot of my patients. You get old, and you kiss a lot of people you haven’t seen in a long time.”

He said he did not intentionally dismiss his assistant on the day in question. But he did admit that he found Kathy attractive.

“The grabbing of the butt was a mistake,” he said. “I know that. She was very enthusiastic about seeing me, and I responded to that. I’m sorry it happened, because Kathy’s a nice person.”

None of the red flags, however, constitutes criminal behavior. The alleged criminal behavior came from the vaginal examination, which Newhard’s lawyer and an expert witness say was medically appropriate.

“His actions served a clear and reasonable medical purpose,” Dr. Seven Fugaro, a San Francisco internist, testified for the defense. But Dr. Kimberly Duir, a Martinez family practice physician who works for the medical board as an expert reviewer, testified she saw no medical purpose for Newhard’s inserting his finger into Kathy’s vagina.

Judge Haakenson acknowledged the conflicting evidence. “But,” he ruled, “the evidence of the medical point of inserting the finger was somewhat limited.”

After the hearing, Ivan Weinberg, one of Newhard’s three attorneys, said, “I haven’t changed my views in the slightest that Dr. Newhard will be vindicated. What this was about was whether the medicine that was practice was appropriate. I believe it was.”