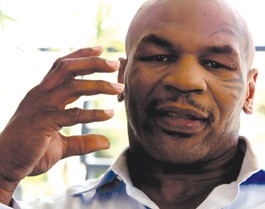 The title subject and executive producer of the documentary Tyson is kept in a medium close-up for most of the picture. He’s reclining in a white, open-necked shirt, resting his wrist and forearm on a leopard-print pillow. Since you see a lot of it, it’s a good thing Mike Tyson has an interesting-looking head—shaped like a geodesic dome, really, and accented with a crescent-shaped Maori tattoo around his eye.

In between Tyson’s straight-to-the-camera interviews—sometimes mixed in with split-screen and overlapping dialogue—director James Toback cuts to Tyson wandering on his beach like a lonely guy in a dating-service commercial. At one point, the fighter is heard reciting Wilde’s “The Ballad of Reading Gaol”; this reminds us not just of Tyson’s own time behind bars but also the older-school pugs like Jack Dempsey and Jake LaMotta, who went in for Shakespeare after their retirement. And there are clips of the fights, too. First come the bouts by the young unstoppable fighter, fights that have the simplicity of gangland executions. Later come the disgraceful, tottering end-of-the-line matches.

What you’re meant to get out of Tyson—I’m not sure of the trustworthiness of the narrator—is the immense amount of fear that created a Mike Tyson. There’s a moment of Tyson near tears, recalling how learning how to fight meant he would never be afraid on his street corner again. I have some birds myself, so I was helplessly moved by Tyson’s story of the first time he hit someone, right after a kid in Brownsville decapitated one of his pet pigeons right in front of him.

But that doesn’t explain the rapidity of Tyson’s slide downward; he was arrested by the NYPD at age 12 with $1,500 in his pocket. Certainly, there was a transformation. Tyson was a fat kid, not that big, a kid with a slight lisp, glasses and acne, and with some kind of respiratory condition. He was lucky; in an upstate New York juvenile home, he met the boxers who trained him and helped shape him into the heavyweight champion of the world.

This film is exculpatory. More than anything, it’s in Tyson’s best interests. The boxer presents himself today as a calm, clean and sober man in his 40s, a religious family man, as opposed to the mad dog and convicted rapist he once was. (The Indiana date-rape conviction is fishy, but it’s not as fishy as the court of public opinion’s judgment, a ruling of “She asked for it.”)

It’s easy for Tyson to explain that he blacked out from the fury of Evander Holyfield head-butting him. It’s not as easy to explain how Tyson got his teeth out of the gum guards to bite his opponent’s ear. One of the few reverse angles in this movie is a clip of one of Tyson’s flipouts after he got out of jail, screaming, “I’ll fuck you until you love me, faggot!” at someone off-camera who offended him.

Tyson is a compelling, sobering movie, though Toback’s own overlay of great, deep-man status on Tyson clouds the issue a little. Tyson’s dirt-dishing (on Don King, for instance) isn’t the same as the deep revelation. The boxer has a reasonable explanation for everything. It’s only those moments of blurted-out, unrehearsed honesty that make the entire story so plausible. I mean, for instance, the ringside interview after Tyson’s ’05 fight with Kevin McBride, in which the defeated Tyson said he no longer had the stomach for boxing and “was there for the paycheck.”

While Mike Tyson has been called a disgrace to the sport, this weird moment of openness reveals the truth about the worst of modern boxing: the billions squandered, the public worship of pain-inflictors, the poverty and desperation that makes a man become a professional fighter.