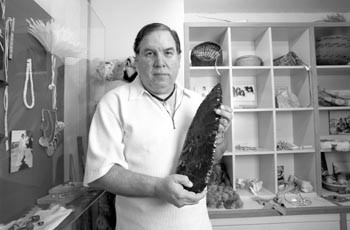 Tribal officials claim their people and their rich cultural heritage have been passed over for too long.

Gene Buvelot, a tribal elder and vice chairman of the Federated Indians of Graton Rancheria, recalls an incident several years ago at the Point Reyes National Seashore (which features a reconstructed Coast Miwok village) that he says demonstrates the problem. “I was standing behind a group, and a ranger was telling them there’s no longer any Coast Miwok around. They were saying I was extinct,” he exclaims incredulously. “I had to step forward and say, ‘Excuse me!’

“A lot of people still don’t know we exist; they keep thinking of us in the past. It’s like we’re in the shadows,” he adds. “But we’re here, and we’re a vibrant community.”

The earliest historical account of the Coast Miwok people–whose traditional homeland stretched as far north as Bodega Bay and as far east as the town of Sonoma and included all of present-day Marin County–dates back to 1579. The group’s federal status as a recognized tribe was terminated in 1966 under the California Rancheria Act of 1958.

The upsurge began more than five years ago, when the Coast Miwoks filed a petition with the Bureau of Indian Affairs to begin the lengthy federal acknowledgment process and thus gain certain benefits. The group was spurred into action when Cloverdale Pomo leader Jeff Wilson unsuccessfully attempted several times to establish gaming facilities, including a multimillion destination resort and casino just south of Petaluma on what the Coast Miwoks claimed was their territory.

In the interim, the Miwok tribe discovered a small parcel of land in Graton that had been set aside as a reservation area for the local Miwoks in the 1920s. This discovery of their own land, albeit now only about an acre, allowed the group to switch from a federal recognition process to a restoration process, which requires an act of Congress.

THE TRIBE, which rents an office in Petaluma, changed its name to the Federated Indians of Graton Rancheria, so that it could include various families from different locales. It has about 370 members.

Last March, Rep. Lynn Woolsey, D-Petaluma, introduced legislation to restore federal recognition for the Federated Indians of Graton Rancheria, which is now composed primarily of the Coast Miwok and southern Sonoma County Pomo groups. The bill, the Graton Rancheria Restoration Act, restores all federal rights and privileges to the tribe and its members, reinstates their political status, and makes them eligible for benefits available to other federally recognized tribes, including health care, educational scholarships, and housing services.

A special clause in the bill states that politically explosive gambling will not be allowed on tribal lands affected by this particular bill. But, according to tribal officials, that’s all in flux because a second bill is on the horizon that, if passed, would give the Federated Indians of Graton Rancheria gaming rights.

On March 16, the group plans to officially introduce itself to the community and unveil its future plans.

Touted as a historical event, the Novato meeting, sponsored by the Miwok Archeological Preserve of Marin, will allow the public and government officials from Marin and southern Sonoma counties to address tribal issues.

Tribal officials, including the group’s chairman, noted author and educator Greg Sarris, of Miwok descent, will be present to provide information about the tribe and answer any questions concerning its past, present, and future plans in the region.

“This [tribe] will be a political unit to disseminate cultural and historical information in a much louder, more vocal, and effective way,” explains Sarris, an English professor at the University of California at Los Angeles. “We want to send someone from the tribe into schools and have someone who can sit on the [state and county] park boards.”

Buvelot says once the tribe is restored, the next step is to find land (the parcel in Graton is apparently too small to be used) to become a functional rancheria, which could be anywhere in the tribe’s extensive historical territory. The goal is then to create some sort of economic development.

And, yes, gambling could still be in the cards.

“I don’t want to start rumors–one of the fears of a lot of people is probably casinos,” Buvelot says. “If we’re a sovereign tribe, we have all the rights of any other tribe. And if it’s the wishes of the tribe to go that way, then they can. But that will be brought up at the meeting.

He refuses to say more about the subject, adding that tribal officials will elaborate during the meeting. “We’ll be prepared with answers,” he promises.

Although the group has been approached by “countless” gaming and nongaming business ventures, because the tribe is better located for a business interest than any other in the Bay Area, Sarris thought Woolsey would have pushed the bill through quickly because of its anti-gaming clause. She hasn’t. Now, Sarris says, another bill being drafted by the federal Bureau of Indian Affairs and involving seven tribes, including the Federated Indians of Graton Rancheria, would allow local gaming.

“This won’t please Woolsey’s constituents, because they don’t want a gambling casino in Petaluma or San Rafael,” he says.

Sarris–who penned the critically acclaimed books Grand Avenue and Watermelon Nights and is something of a celebrity himself after his remembrance of growing up on Santa Rosa’s Grand Avenue became an HBO mini-series–is “more than a little frustrated” by what he calls the slowness of Woolsey’s office.

Calling the Sonoma County Independent from Woolsey’s Washington, D.C., office, Woolsey’s press secretary, Heather Brewer, says that the bill “was introduced on March 2, 1999. It was referred to the House Committee on Resources, and that’s where it still is. It’s been a big issue for [Woolsey}, but with the Democrats in the minority, it’s hard to gets something like this through, because we’re at the mercy of the Republican leadership.” In the meantime, the tribe is intent on preserving cultural traditions through the creation of a living-history museum at Olompali State Historic Park in Novato.

For the past five years, Coast Miwok descendants and volunteers have gathered regularly at the wooded site six miles south of Petaluma to reconstruct a small replica of what was once a thriving Native American trading village.

It includes dwellings called kotchas, which have willow or wooden frames and are lashed with tule reeds, a flexible, bamboolike covering. Additional construction includes cross-pole and brush sunshades, an acorn granary, a tule drying rack, and a dance circle. Unlike Kule Loklo, a similar Miwok village at Point Reyes National Seashore, the Olompali site is being built by the Miwoks themselves.

Buvelot says the project is in response to the fact that more baby boomer-aged Native Americans are searching for a sense of cultural identity. “During the teenage years there’s a loss of interest, and [when they’re] in their 20s and 30s you start seeing them appearing at the meetings,” says Buvelot, who practices traditional flint work.

“I could kick myself because when I was a teenager I didn’t pay that much attention to my grandmother and her sisters, who were some of the last fluent speakers of the language. If I had, I’d probably be speaking it fluently right now.”

In addition to setting up an economic base, the tribe, once recognized, plans to establish a permanent cultural center. “We have a lot of things passed down from our families but no safe place to keep them,” says Buvelot. “If we had a place we could call our own on our own land, it would be great.”

TRIBAL OFFICIALS are optimistic that a Native American revival in the North Bay will occur once the tribe is restored and as the possibility of establishing its own sovereign government comes closer.

Sarris believes that learning about Native American culture is important for the entire local community. “Even though we don’t ride appaloosa horses and wear braids today, we’re still Indians. We know the stories. I see landmarks like a tree, a rock, a site, or even where a parking lot stands today, and I know where somebody was murdered, I know where a fight took place, where a baby was born, I know where coyote tricked porcupine,” he says. “The landscape is alive and the environment was our bible, and the way in which we read and remembered our history.

“We still know that, and it’s one of the unique things we still have to offer.”

Buvelot adds that the objectives of the Federated Indians of Graton Rancheria are simple: “Our goals are to be self-sufficient with some sort of economic development and to achieve the benefits available to all other tribes,” he says.

“And to finally come out of the shadows.”

The Federated Indians of Graton Rancheria will hold a discussion on tribal issues and talk about its future plans on Thursday, March 16, at 7:15 p.m., at the Hamilton Community Center (formerly the Officer’s Club at the Hamilton Army Base), 203 El Bonito Ave., Novato. 763-6143.