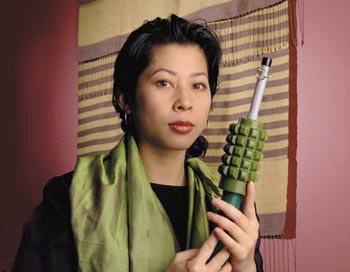 The ghosts of childhood still haunt the 29-year-old author and human rights activist. And why wouldn’t they? It’s hard to imagine any exorcism potent enough to dispel the horrors that Ung experienced growing up in Cambodia under the murderous Khmer Rouge, one of the deadliest governments in the history of our blood-stained planet.

The horror began in 1975, when Ung was just 5 years old, the second-youngest daughter in a middle-class Cambodian family. Almost overnight, the comfortable, loving environment of her family home in Phnom Penh was shattered by the arrival of the Khmer Rouge, a fanatical guerrilla army that seized power in a country blasted and demoralized by the fateful decision of the United States to bomb Cambodia’s border with Vietnam.

To survive under the new government, Ung’s well-off family was forced to flee to the countryside and pretend to be poor peasants. It didn’t work. Over the next few years, Ung would lose her father, her mother, siblings, and friends to execution and hunger.

It’s a grim enough story summed up in a few simple sentences. But it’s the details that burn like a brand, as Ung–who speaks on March 14 at Sonoma State University–demonstrates in her new memoir, First They Killed My Father: A Daughter of Cambodia Remembers (HarperCollins; $23).

Ung’s writing may be unpolished at times, but her powerful story quickly sears away preoccupations with style. For instance, the author’s account of helplessly watching Khmer Rouge soldiers lead her proud father away to his execution is like a stab in the heart.

Still, despite the book’s power, Ung figured few people would ever read it.

“I thought it was going to come out and disappear into a literary black hole,” she says, speaking by phone from her office at the Vietnam Veterans of America in Washington, D.C., where she works as an anti-landmine activist. “I would be able to say I’d done it and that’s about all. My goal was to sell 10 copies and have my friends read it.”

Instead, the book took off like a rocket, attracting praise from critics and landing Ung on TV talk shows and the front page of USA Today.

In part, Ung says, the popularity of First They Killed My Father can be chalked up to our concerns about contemporary war crimes in places like Rwanda and the former Yugoslavia.

“People are recognizing that this is not a unique story,” Ung says. “When the Holocaust happened, people said it would never happen again. Then came Cambodia, and Bosnia, and East Timor, and on and on. . . . Never again is turning out to be many, many times over.”

But the author says there’s another important reason her book has caught on. “I’m a fairly average person,” Ung says. “But I think that the fact that I came from adversity and survived to do the work I’m doing gets people’s interest.

“Underneath it all, it’s a story about life and family and love and loss,” she continues. “What kept me alive was my family. People understand that, no matter where they live. Everybody wants to feel their father’s arms around them.”

FROM 1975 TO 1979, the Khmer Rouge killed an estimated 2 million Cambodians. With numbers like that, it’s easy to lose sight of individual victims. But Ung’s memoir gives faces to the dead.

Her family’s struggle for survival was unimaginably grim. In their bizarre quest to return Cambodia to an agrarian country free of foreign contamination, the Khmer Rouge targeted a wide range of internal enemies.

If you were an urban dweller, a foreigner, or a servant of the previous government, you were often marked for death. In some measure, Ung’s family suffered from all of those taints–her mother was part Chinese, and her father had been a police officer. Concealment was their only hope.

Always on the verge of starvation, Ung’s family moved from village to village, only a step ahead of discovery and death. At last, the Khmer Rouge caught up with her father, though Ung doesn’t know exactly how he died. She only hopes it was merciful.

“What you don’t see, your mind makes up,” she says. “I just pray that he died the way I imagine he died. But the fact is that most Cambodians were not shot. Ammunition was too expensive and they couldn’t waste it.”

Soon after her father was killed, Ung’s mother decided that the family would survive only if she sent her young children off on their own. She turned out to be right: soon after, she too was executed. Ung ended up in a camp for orphaned kids, where she was trained as a soldier.

Against long odds, Ung was finally reunited with some of her siblings and fled the country, eventually finding a new home in Vermont. She went on to college, where she obtained a degree in political science. But the ghosts were always there, periodically surfacing to inflict crippling bouts of depression.

“When I was young, I used to play soccer and get hit on the head a lot because I wanted the images gone,” Ung says. “Amnesia is really hard to get. But I wanted them gone gone gone.”

It was partly to dispel those demons that Ung decided to write First They Killed My Father.

“I just got tired of giving the Khmer Rouge that much power over me,” she says. “They didn’t take my body, and I didn’t want them to take my mind.”

Still, writing the book proved harder than she had imagined.

“I’d written and talked about it before, so I thought I’d gone over it a little bit,” she says. “But it was very difficult.

“And yet also, it was very healing, very therapeutic,” she recalls. “For so long, I didn’t allow myself to remember my family and the good times, going to the movies with my father or shopping in the market with my mother. . . . Writing the book helped me reclaim some of those good memories.”

These days, Ung works as a national spokesperson for the Campaign for a Landmine Free World, a Nobel Prize-winning program of the Vietnam Veterans of America. Her obvious passion for the cause springs from the havoc caused by the millions of landmines that litter her homeland, something she witnessed when she went back home to visit her family in 1996.

“I’d read about [the landmine problem], but until I got there, I didn’t realize that there isn’t a place where you can go to escape it,” she says. “You run into landmine amputees all the time.”

As for her literary career, Ung isn’t sure when she’ll write another book.

“This was emotionally and physically draining,” she says. “I need to take a sabbatical. I’m going to go see movies and have coffee in cafes and write letters to friends. Now that’s something I haven’t done in a while.”