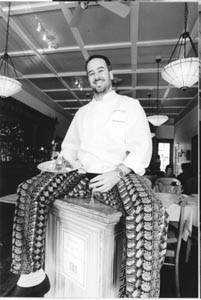 Home on the Range

MICHAEL DOTSON does his share of moving around. Like many chefs his age, Dotson has been looking for maximum exposure to maximum experiences, which before his arrival last year at Heirloom in Sonoma included PlumpJack at Lake Tahoe and the Slow Club in San Francisco.

In that light, Dotson’s arrival at the restaurant at the base of the Sonoma Hotel seems the next logical step. The food scene here is, as they say, happening, the kind he dreamed of during 18 isolated months in Squaw Valley. But it’s the horses and mellow countryside that really sealed the deal, says this 31-year-old native of rural San Diego County. “It reminds me so much of home,” says Dotson.

Heirloom has a turn-of-the-century European feel, and the food is French inspired, but Dotson’s attitude–a freewheeling adaptability and egalitarianism–clearly comes from his Western roots. “I believe in simplifying elegant, refined cuisine into something more homey. Part of this is just the kitchens I’ve been in, and part is wanting to charge [only] $16 for a dish, where someplace else with a big kitchen and staff would charge $33,” says Dotson. “The guy who charges $33, who does 10 ingredients and melds them so well on the plate, he inspires me. His food is certainly part of my passion. But I’m comfortable foregoing some of that for accessibility.”

Accessible food is part of Dotson’s inheritance. His family’s grocery store in San Marcos served as the central supply point for farmers and ranchers for miles around, offering everything, even a full-service butcher shop, in one independently owned and family-operated establishment. Though the store went the way of most good family markets–oblivion, with a brief incarnation as a liquor store–his grandfather worked in it until it closed, and Dotson remembers that time fondly. “I grew up around a market that people nowadays would love,” he says with a rueful grin. “I probably appreciate it more now than I ever did then.”

His grandmother gave Dotson another food memory to treasure: Sunday dinner. “Every Sunday, no matter how hard I tried, I ended up there with a big ol’ stomachache at the end of the meal because I ate too much,” says Dotson. “I remember lying there with a coloring book, stomachache after stomachache.” The leg of lamb was the best, Dotson remembers, but everything his grandmother made was good. What’s more, she really understood the young chef’s path.

“The newspaper clippings that she would send me showed that she was more in tune with what I was doing than anyone else in my family,” says Dotson. “Eventually the rest of my family started to get into that, but she was way ahead of the game.”

Later experience would prove to be just as formative as the Sunday leg of lamb. Dotson’s six-week tour of France and Italy in 1996 left an indelible impression about the importance of fresh ingredients and family farms, not to mention cleaning quantities of foie gras in Strasbourg. But his love for good, down-home food, wherever home may be, even shines through when he talks about a recent road trip through the Midwest to visit a chef friend in Kansas City.

“As rich as France and Italy are in their food traditions, so is this country,” he says fervently. “There’s food being created everywhere. And there’s definitely food tradition and history in this country to learn from.”

WHICH BEGS the question: What did he learn in Kansas City? “I learned jazz and barbecue,” he says, his eyes softening. “It’s the most amazing barbecue I’ve ever had. I’ve had barbecue in Texas and a little in Georgia, but the barbecue in Kansas City . . . ,” and Dotson is off and running about L.C.’s, a barbecue joint on the outskirts of town. Oh, the flavors, he raves, and the sauce, and it being the only place out of all he visited that baked its beans in the roasting pit, below the roasting meats.

“All the stuff would drip down into the beans, and they would chop up some of the meat and put it in with the beans, and it was just like . . .”–here Dotson gestures, helpless for speech. “I actually went back and got some to go before hitting the road.”

That road took him back out through America’s breadbasket, the fields of wheat and feed corn, massive acreage of flat blowing fields, but even that prosaic landscape figures into Dotson’s view of food culture and tradition. “Food history may not be necessarily a dish, it may just be the farm that’s been there 100 years.”

As respectful as Dotson is of Americana and long-standing tradition, he frequently displays flashes of the free spirit of his ancestors. “There’s nothing I can’t do here,” he says. “Maybe I won’t do it now, but eventually I will. Like, we had a conversation yesterday about octopus. I love octopus.”

Dotson’s sous-chef, Hillary Onstadt, has been sitting silently by for half of the interview, but here she cannot restrain herself. “It won’t sell. I grew up in Sonoma. It’s not going to sell.”

“And I’ll get out the big ‘I told you’ sign,” says Hillary, rolling her eyes.

“Maybe five people will order it,” admits Michael. “But you can’t live every day for the customer. Every once in a while you have to do something for yourself.”