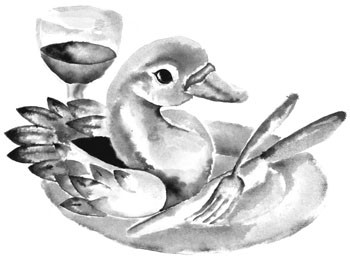 THE DUCK with dirty rice and eggplant-sweet potato gravy was a simple menu, as far as Cajun food goes: only five or six subrecipes, sweet potato cut up and cooked three different ways, three quarts of homemade stock added a half a cup at a time and then simmered down to one tenth of its original volume. Three ducks for two people seemed a little extreme, but when working from a recipe I always follow a simple, yet important, precept: Don’t mess around with the measurements until you’ve done it right one time by the book. (“Don’t feed anything untested to people who don’t share your bed” is Commandment No. 2).

So, three ducks it was. Actually obtaining them wasn’t a problem. I knew our local independent food market would have them. G&G (Grand & Grotesque? Gritty & Gratifying?) looks like the shlumpiest of supermarkets, with a logo and shopping carts left behind from the ’50s, but in fact it has a well-deserved reputation for stocking obscure (to the typical Western palate) foodstuffs. Headcheese? Check. Organic St. John’s wort energy drink? Check. French cookies hand-rolled by rosy-cheeked virgins in the Alps? Check. The G&G supermarket is much like a Middle Eastern marketplace, without the dirt and the flies: anything you might want to ingest is there.

The ducks lay in the refrigerator case, as tamely wrapped as the turkey breasts on the next shelf over. It was only when I picked up one package and turned it over looking for an expiration date that I understood how much work really lay ahead. I made eye contact with the duck.

Now, I am not easily spooked by dead animals and their body parts. I have paused next to cows’ heads and bargained for bits of beef at some of the best and busiest farmers’ markets in Russia. I actually like beef tongue sandwiches, and have wrestled with gristly pig haunches on more than one festive occasion. But somehow, staring at those opaque black beads that peered out through a double layer of plastic wrap, my stomach twitched and I had to pause. The duck, being dead, didn’t even blink.

Obviously my response had something to do with eyes, a response that I probably share with many middle-class Americans. For example, we tend to be disturbed by the eye in Chinese whole-fish dishes, even though the condition of the eyes is the best measure of the fish’s freshness.

But I also think it’s representative of a larger problem of how disconnected Americans tend to be from the source of their food and its original state. The other night I overheard a conversation at a restaurant. Someone was apparently putting a lot of cream in his coffee, so a tablemate suggested that they bring a cow to the table and he could help himself. The cream-lover’s reaction was swift and strong: “Milk from a cow? Disgusting!”

Even produce, which has no eyes or bodily fluids to gross us out, seems somehow excessive, obscene, or dirty unless it’s been processed, cleaned, and chopped up as much as possible first. The first time I made a recipe that called for beet greens, I looked and looked in a Safeway for them. The beets there were invariably shorn of their crowns, sitting lumpy and crimson with no indication that they had ever reached through the ground toward the light.

Of course, beets are not birds. I could rationalize my unease with some sort of post-industrial hyperhygienic angst, or run over it with a cynical postmodern hedonism, but it was still there, the moral muddle that underlies the consciousness of any thinking meat-eater. The eyes of a dead animal are windows to our hungry souls.

The funny thing is that I still harbor some vague fantasies about getting my girlfriend and me a few acres out in the country someday, with space for a big garden and some chickens. What happens to the chickens in my fantasy looks a lot like that scene in Babe, where Farmer Hoggett strides firmly to the slaughtering room, passing over our porcine hero for an at-first nameless duck. The camera cuts away, we hear a flutter of wings and some frantic quacking, and then he heads back to the house, an unidentified bundle dangling from his hand.

TO FILL in the blanks in my imagination, I recently asked friends with chickens to invite me over the next time they kill one. If I can’t watch it, perhaps I don’t deserve to eat it. They haven’t called me yet, so these ducks were simply the next step down that path. They were already dead; my job was just to take off the bits that would remind us too much of that fact.

I thought about these things all the way home, ducks sitting at the bottom of bags in the back. Well, of course I bought them. What could I do? I had talked up the recipe for days to my sweetie, and had invested in a five-pound bag of cayenne pepper for the event. And the actual preparation wasn’t as bad as I had feared (or hoped). My prime piece of German cutlery seemed very dull as I cut the neck, but some minor thug on the poultry farm had taken the trouble of breaking the bird’s legs for me, so the feet came off easily.

I duly plastered the ducks with a pungent paste of spices and salt, roasted them for hours, and let them cool, then prepared the rest of the dishes. After only 10 hours (I did mention this was an easy menu, right?), the food was ready. The dirty rice fluffed up nicely, forming a perfect cradle on my plate for the rich spicy gravy, with the half-duck lying in state on the side, crackling brown. Before I dug in I paused again, looking over the edge into my omnivorous heart. I knew more about duck now than before; my innocence, my ignorance was gone. I was a more culpable cook.

But I will say this: it was delicious.