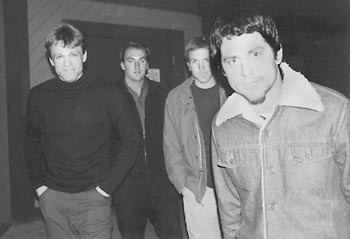 Eric Lindell and the Reds

Native sons: Eric Lindell, right, and the Reds have been major players on the local music scene. But after this month, they’ll join the crowd of other bands that have left the county, bound for the big music centers.

Do local musicians really have to leave the county to hit the big time?

IT’S A WET January night in Cotati, and a long line of people are pressed up against the outside wall of the Inn of the Beginning, trying to stay out of the rain while they wait to fork over their $6 and get their hand stamped. Inside, the band is taking the stage, the music is beginning, and a crowd of all shapes, sizes, and sobriety levels is starting to sway to the bluesy sounds of Eric Lindell and the Reds.

You don’t have to go snooping through anyone’s CD collection here to figure out that this is a group of faithful fans: As the sinewy, tattooed Lindell launches into his first song of the evening, the words are already on the lips of half the people in the audience. The general enthusiasm isn’t dampened by the weather, or the crowded path to the bar, or even by the fact that this might one of the last times Lindell plays a gig in the county that has made him a local favorite.

Lindell, who grew up in Santa Rosa and Forestville, has built up a loyal following in his long career on the Sonoma County scene. From his early stint with funk-band Grand Junction to his current, blues-based outfit, which leans heavily for inspiration on British-invasion-era blues rock bands like the Yardbirds, Lindell has consistently pulled in big, enthusiastic crowds, and his bad-boy good looks have made him into a local heartthrob.

But a month ago he moved to New York City, and after his upcoming farewell concerts, he’s back to the Big Apple to stay, hoping to hit it big on the other side of the continent (although a New York-based fiancée also played a part in the decision).

“I’m not going because I don’t like the area,” Lindell explains. “This is just what’s right for me right now.”

Lindell’s departure is just the latest in a series of high-level defections from the local music scene over the past several years. The rock group Hangman’s Daughter, singer Diane Swann, and folkster Joanne Rand, among others, have also headed for greener pastures. These are musicians who have spent years building a passionate local following, only to head off to the country’s big music centers, to such places as Nashville or Los Angeles. When asked why, they tend to make the same, rather obvious, point: If you want to achieve success in an increasingly competitive industry, you have to take any advantage you can get, especially proximity to a few hundred record company execs.

“There’s been a ton of young musicians that have moved on, and Eric’s just the latest one,” says Tom Gaffey, manager of Petaluma’s Phoenix Theatre, where Grand Junction used to play regularly.

BUT DOES IT really have to be this way? Some people involved in Sonoma County’s music scene say no. They look at our county’s pool of musical talent, eager fans, and steady stream of weekend visitors and see an opportunity to craft a local version of the flourishing music scenes in Seattle or Austin, a scene that could be the launching pad for major-label careers.

Leading the charge is the newly formed Sonoma County Music Association. Since it was formed last year, SCMA has picked up several hundred members, established office space in the Luther Burbank Center, and instituted an ongoing series of talent showcases to spotlight local musical acts. But organizers admit that these are just the first tentative steps.

“We don’t quite have a scene around here,” says Jim Corbett, a local country musician on the SCMA board. “Quite honestly, I don’t think we’ve got it up and running yet. It’s going to take two or three years before that happens, but I believe that it can happen.”

Until things do change, however, Corbett says he can understand why Sonoma County’s big musical fish go looking for bigger ponds. But he’s not sure moving is all it’s cracked up to be.

“We miss guys like Eric,” Corbett says. “He’s kind of the top of the food chain here. But, of course, it won’t be the same in New York. You’re not going to be the big dog there. You’re going to have to jump in and work your way up the scene. But Eric has the charisma and talent to do well wherever he goes.”

Not everyone is as understanding of these departures. Some local musicians view relocation as a kind of desertion, a move that’s bad for both the scene and the departing band.

“I’m really disturbed that people are feeling they need to leave,” says Christine Alexander, lead singer of the local ska-flavored pop band Little Tin Frog. “Musicians need to realize that if the music scene is dead, it’s because we’re making it dead. We have to get people interested, we have to get fabulous and do interesting things.”

For three and a half years, Little Tin Frog has been doing just that, playing local gigs, pressing a quirky CD called Brilliant Ideas, and going on the road around Northern California. Alexander thinks bands need to work together to spread the word that Sonoma County has more to offer than scenic beauty and good wine.

“Of course, we have thoughts of leaving, when things get slow,” she says. “But I think that if you’re really good enough, people will notice you, wherever you are. … You don’t have to flee the county. I don’t agree with this fleeing thing.”

BUT WHAT HAPPENS to those who do make the move? Some, of course, wind up washing dishes or waiting tables while they wait for a break that never comes. A lucky few find success. It’s increasingly clear that Hangman’s Daughter should be counted among the latter.

“We love Sonoma County so much–that’s why it took us so long to leave,” says Sherry Phillips of Hangman’s Daughter, speaking by phone from Nashville, where the band moved about a year ago. “But it just became very apparent that if a music career is what we’re going for, we needed to go to it, ’cause it wasn’t coming to us.”

But the band’s Nashville move got off to a bad start. After a grueling five-day trip, the band members discovered that the house and backyard studio they had rented sight unseen was, as Phillips puts it, “a complete dump.”

“The ceiling was caving in, and there was mold on the walls,” she recalls with a chuckle. “The studio in the back was even worse. It was this broken-down garage that was leaking and they had just put carpet over mud. It was just horrific. So we ended up staying in an Econo Lodge for a week.”

But once properly situated, the band quickly made a splash in Music City. The owner of one of Nashville’s major recording studios has come on board as the group’s manager, and band members believe a major-label recording deal is not far off.

So what does Phillips think about plans to build up the scene in her old stomping grounds? Can the fickle attention of the music biz be brought to bear on the Redwood Empire?

“That’s hard to say, because I think there’s something really magical about Sonoma County the way it is,” Phillips says. “The fact that there’s not industry there, well, that’s probably a good thing.”

Of course, Sonoma County clearly has a long way to go before it can either hope or fear becoming even a miniature musical hot spot. High-profile local music scenes tend to coalescence around a topnotch indie label (such as Sub-Pop in Seattle) or a critical mass of nightclubs like the one on Austin’s Sixth Street. Sonoma County, on the other hand, has a small number of venues scattered in different cities and towns.

The county does boast such popular clubs as the Inn of the Beginning, the Mystic Theater, and the Moonlight. But low turnout and, many club owners argue, strict monitoring by local law enforcement have turned much of downtown Santa Rosa into a ghost town on weeknights. The closure of Magnolia’s two years ago exemplifies the problem. Can even the best organizational effort overcome those obstacles? And is it even possible to consciously create an Austin-style scene?

“Those things seem to mature naturally with the music, rather than someone actually trying to put them together,” says Bill Bowker, who is a DJ and the musical director at KRSH-FM (98.7), as well as a longtime observer of the local music scene. “It’s an admirable thing to try, but I don’t know if it can actually happen.”

But Jim Corbett and the rest of the folks at SCMA are determined to give it a shot. Austin and Seattle, they say, weren’t just accidents.

“Those things didn’t just happen,” Corbett argues. “There were people working to make it happen, getting the word out.”

In any case, it’s clear that the county continues to exert a powerful pull on its wayward sons and daughters. The four members of Hangman’s Daughter, for instance, hope to return after they hit the big time.

“We’ll be back,” says Phillips. “The lifestyle in Sonoma County, that’s who we are. We’re California people.”

As for Eric Lindell, the consensus seems to be that he’ll land on his feet no matter where he goes.

“He’s a pretty smart guy and extremely talented. Pretty much wherever he lands, he’ll make himself a party,” Phillips says with a laugh. “The party is where Eric Lindell is.”