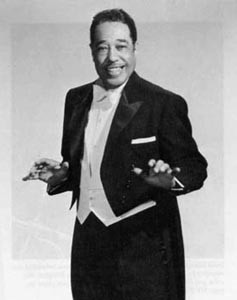 MARIN JAZZ WRITER and educator Grover Sales dubbed him “our greatest composer,” and the flood of recent CD reissues and tributes celebrating the 100th anniversary of the birth of Edward Kennedy Ellington show just how rich that legacy remains on the cusp of the 21st century. “[Duke Ellington’s] veiled, princely psyche, more complex than [Louis] Armstrong’s or [Fat] Waller’s, was given to philosophical turns and levels of sophistication uncommon for jazz musicians of his time,” Sales wrote in his authoritative work Jazz: America’s Classical Music (Prentice-Hall/Spectrum, 1984). “Duke’s uncanny coming to terms with commercial, racial, and internal pressures that collapsed less hardy peers from Fletcher Henderson to Charlie Parker has long been a source of fascination–and annoyance–to critics-spectators of the maddening clash between the Duke as artist and the Duke as a crowd-pleasing showman.”

The current focus rests largely on the Duke as artist. The Lincoln Center Jazz Orchestra, under the guidance of trumpet wiz Wynton Marsalis, has toured the country with a pair of Ellington programs (both of which stopped earlier this year at the Luther Burbank Center) and released the energetic PBS soundtrack Live in Swing City–Swingin’ with the Duke (Colum-bia), which included the delightfully obscure jazz stomp “Happy Go Lucky Local.” And this year’s San Francisco Jazz Festival featured Orchestral Ellington: A Centennial Celebration, a rare Oct. 22 performance of his sacred concerts. The monthlong festival wraps up its closing week Nov. 4 at the Palace of Fine Arts with a Jazz on Film program, A Portrait of Duke Ellington, hosted by producer Orrin Keepnews, who supervised the release of classic RCA recordings on the recent 24-CD box set of RCA material.

While there are a plethora of new and recent Ellington CD releases, geared to every budget, the complete RCA recordings (a more affordable three-disc sampler is available) is by far the most ambitious. Spanning Duke’s career from 1927 to 1973, the voluminous set kicks off with the landmark “Black and Tan Fantasy,” which marked the leap from such cornball novelties as “Animal Crackers” to the more impressionistic mood pieces to which Ellington would return over the years. The collection moves genially through classic Ellington fare like “Mood Indigo” and “Sophisticated Lady” to some truly unusual offerings–including a seldom-heard waltz-time version of “Take the ‘A’ Train” and 1966’s contagious go-go send-up “Blue Pepper (Far East of the Blues)”–all of which underscore Ellington’s remarkable ability to change with the times while remaining true to his musical vision.

THE RECENT ANTHOLOGY Impulsively Ellington! A Tribute to Duke Ellington (Impulse), a dynamic collection of Ellington covers, is one of the year’s best homages to the Duke. The list of players, all recorded between 1961 and 1966, reads like a Who’s Who of ’60s Jazz and includes such Ellington sidemen as saxophonists Johnny Hodges, Paul Gonsalves, and Ben Webster, all claiming the spotlight. The tunes range from swing master Lionel Hampton’s breezy “Ring Dem Bells” to free-jazz saxophonist Archie Shepp’s bold deconstruction of the Ellington chestnut “In a Sentimental Mood.” Highly recommended, and an suitable adjunct to the recently reissued Soul Call (Verve), a 1966 live concert that showcased Ellington’s knack for reinventing the jazz orchestra.

Meanwhile, jazz patriarch Ellis Marsalis last week released Duke in Blue (Columbia), which includes seductive solo renderings of such popular Ellington piano ballads as “Prelude to a Kiss” and “Melancholia,” some of the most beautiful music ever written.

“For all his crochets, quirks, and put-ons, Ellington could still astound, even to the last . . . ,” Grover Sales concludes in his 1984 book. “[H]e remained a prolific, often inspired composer and his piano an ever-increasing source of wonder. This magic, or hope of it, kept us coming back to Ellington to the end.”

And it still does.