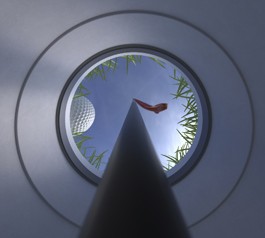 Sure, it’s outdoors, it’s scenic and players stroll at a leisurely, chosen pace. Within that pace, however, golf is a full-frontal attack on mental stability, a game of constantly fighting against oneself. It’s clustered with psychological brutality; it rarely giveth, formulated instead to taketh away as much as it can wrangle. Golf, in the famous words of outdoorsman Mark Twain, is a good walk spoiled.

And yet in rare moments—a good chip-in from the deep rough, a perfect tee shot that backspins to within a foot of the hole—golf is more rewarding than anything. The perfect sound of a ball dropping finally into the cup owes as much to a million tiny little thoughts, movements, decisions and impulses as it does to divine intervention. To hear that sound 18 times in a row—assuming that all clubs remain in the bag and aren’t thrown into a water hazard at the end of a round—is to know a form of Zen meditation.

Witnessing top-notch professionals achieve this feat in person, hole after hole, isn’t a chance most golf fans have. Big names like Tom Kite, Tom Watson, Nick Price—those are the guys you see on television. They don’t come to town and play for a $2.5 million purse at the golf course down the street. Do they?

They do. For the last five years, pros over the age of 50 like Ben Crenshaw, Hale Irwin and Fuzzy Zoeller have done just that at the Charles Schwab Cup Championship in Sonoma, where each year the top 30 golfers on the Senior Tour finish the season at the Sonoma Golf Club. This year’s championship is held Oct. 30–Nov. 1, and may be one of Sonoma’s last; the tournament moves to San Francisco’s Harding Park in 2010.

For the fans, it couldn’t get better. Crowds in recent years have been small enough for spectators to watch right at the ropes, hear players talking with caddies and even sometimes chat with the pros as they make their way from green to tee. It’s not uncommon for players who’ve won major championships to stop and sign autographs or give pep talks to young golfers.

For the players, it’s a great opportunity to bring the family along, to keep competing, to make a little prize money and to give back to the fans whose support has given them the opportunity to stay in the game. But this is no casual round of golf. As the year-end event for the Senior Tour, the playfield is aggressive; while the atmosphere is inviting, competition can get fierce.

“These guys might have a lot of snow on the roof, but still a lot of fire in the furnace,” says last year’s champion Jim Thorpe, who has won three out of the last five years in Sonoma. “These guys can still play. The level of competition is getting stronger and stronger.”

Who to watch this year? Obviously, Kite, Watson and Price offer name recognition and solid playing, but keep an eye on Fred Funk, whose casual demeanor and goofy jokes are always entertaining. Craig Stadler, known as “the Walrus” because of his imposing frame and droopy moustache, has been famous for his blue-collar temper in the past. If you’re after a potential explosion, he’s the one to follow. Jay Haas and Bernhard Langer have both been prominent winning players in recent years, and underdog Bobby Wadkins, after never winning in 23 years on the PGA Tour, has finally stepped from older brother Lanny’s shadow to win four hard-fought tournaments on the Senior Tour.

Returning champion Thorpe is a natural choice to watch, if for no other reason than to gawk at his bizarre swing (fellow pro Johnny Miller once quipped, “It has more moves than kung-fu”). An aggressive player on the old-school Sonoma course, he drives over tall trees and goes for greens when others play it safe and lay up in front of sand traps. Crediting his past wins in Sonoma to drinking “a lot of wine,” he’s always personable with the gallery.

With tickets at just $30 per day, the Schwab Cup is a great deal for golf fans, and with a wine and food festival on the Sonoma Golf Club’s back lawn, even the casual spectator has something to do during downtime. But to truly appreciate what these players accomplish out on the golf course in Sonoma, it’s worth either trying it out for the first time or brushing up your game beforehand. Here’s a run-down of local public courses to visit before seeing in Sonoma how it’s really done.

Greens fees change with the season and the day of the week; it’s best to call to confirm rates. Checking course websites will yield seasonal specials and online deals. Many of these courses also have discount offers at www.golfnow.com, especially helpful for the more expensive courses—it’s not uncommon to find rates up to 70 percent off.

Los Arroyos Golf Club A surprising course that doesn’t look like much from the road but offers challenging holes and homespun charm. Hole 5 doglegs over a creek with a tight fairway. Nine holes: $10–$14. The Killer Deal: Monday–Saturday after noon, unlimited play for the nine-hole rate. 5000 Stage Gulch Road, Sonoma. 707.938.8835.

Oakmont Golf Club An 18-hole designed with senior golfers in mind, with wide fairways and prominent cart paths. Eighteen holes: $15–$50. The Killer Deal: Go when it’s hot and the greens are empty; it’s easy to get on and play quickly. 7025 Oakmont Drive, Santa Rosa. 707.539.0415.

Mill Valley Municipal Golf Course Built in 1919, this very inexpensive nine-hole course is a deceptively simple walk nestled within hundreds of redwood trees. Beautiful views from holes 2 and 4, but be in shape. Nine holes: $12–$19. The Killer Deal: the “back nine” is only $10; Mill Valley residents play for less. 280 Buena Vista, Mill Valley. 415.388.9982.

San Geronimo Golf Course A well-maintained 18-hole course with challenging holes and affordable rates. The back nine is beautiful with the elevated tee shot off hole 10, with a blind green, as a standout. Eighteen holes: $28–$64. The Killer Deal: Morning play on the back nine is only $20. 5800 Sir Francis Drake Blvd., San Geronimo. 415.488.4030.

Napa Golf Course at Kennedy Park An 18-hole course designed by Jack Fleming that hugs the Napa River with 16 holes of water. Fun, inexpensive and challenging. Annika Sorenstam was seen playing here a few years back. Eighteen holes: $25–$43. The Killer Deal: Twilight rates get as low as $14; juniors play free with full paying adult after 10am. 2295 Streblow Drive, Napa. 707.255.4333.