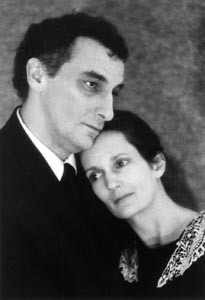 Death of a Salesman

‘Death of a Salesman’ suits the Players

ARTHUR MILLER’S plays are the red meat of the American theatrical diet–heavy, bloody, emotional carnage that is a staple for a plurality of theatergoers. To wit, the Santa Rosa Players’ production of Death of a Salesman (directed by Carl Hamilton) is an imminently faithful production of Miller’s Pulitzer Prize-winning eviction notice to the American Dream, served medium-well with a small side of bitter herbs.

Originally produced 50 years ago, Death of a Salesman is a touchstone to an era that accommodated sexism (quasi-macho references to “ruining” women take one right out of the play) and an erstwhile work ethic (few of the Lomans’ career objectives reflect present-day concerns). Consequently, the work has long ago graduated to period-piece status, a fact director Hamilton embraces successfully.

As Willy Loman, Frank DeMartino is a masterful student of character and is the Players’ capital talent. His Loman is a vital, pitiable, grave portrait of spiritual crash-landing that provides the gravity necessary to hold the other actors in consonant orbits. DeMartino is, as he should be, this production’s greatest endorsement, inhabiting Loman with alacrity and with corporeal and emotional perceptiveness.

As Loman’s laggard sons Bif and Happy, actors Chris Schloemp and Rick Codding deploy agreeable if occasionally antiseptic performances. Schloemp’s portrayal of the prodigal, malcontent ex-football star Bif is intermittently donnish and hot-blooded, admirably conjuring the mien of resignation without purging passion. Schloemp falters, however, when Miller’s script veers him near melodrama–e.g., exposing Loman’s suicide device (a silly little rubber hose used to access a nipple on the gas pipe) with the fervor of introducing inane mystery evidence in a courtroom farce: “All right, phony! Then let’s lay it on the line.”

Codding’s Happy is a jaunty, well-meaning wastrel plausibly stunted by the drama of his elder brother’s life. The fact that Codding and the alpine Schloemp bear absolutely no resemblance as siblings is absorbed by Codding’s spirited comic relief–though the ad hoc references to his paunch and relative lack of stature come precariously close to demeaning him.

David Herbst is refined and subtle as Charlie, Loman’s congenial next-door neighbor, and applies an able polish to the play’s signature requiem monologue (“He’s a man way out there in the blue, riding on a smile and a shoeshine”). Talented Donovan Dutro, turns in an understated performance as Bernard, Bif’s brainy lackey, and is by turns an amusing flunky and foreboding foil.

Adding little to the show is the canned emotionality of Erik Satie’s Gymnopédies, piped in for an obvious but benign pluck on the heartstrings. Totally malignant, however, is the deluge of music accompanying Loman’s climactic second-act monologue–a din that is an insult to both DeMartino and the audience.

Generally, the Santa Rosa Players perform widely known and accepted, commercially viable theater for a consistent and appreciative audience. On this score, Death of a Salesman will not disappoint. Nobody dast blame this show.